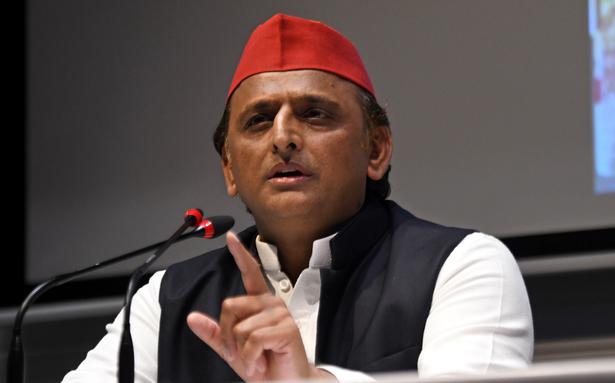 LUCKNOW: Leader of Opposition and Samajwadi Party national President Akhilesh Yadav has decided that his party would hit the streets on public issues to take on BJP to face 2024 Lok Sabha. Former chief minister Akhilesh Yadav led impressive padayatra of his party legislators on the opening day of UP Legislature session.

Akhilesh Yadav started his padyatra from party headquarters to Vidhan Bhawan to highlight the issues of collapse of law and order, growing unemployment and crime against women. When police administration stopped the padayatra from going any further Akhilesh Yadav directed his party legislators to stage dharna in protest. Samajwadi Party MLAs also organised mock session of Vidhan Sabha on the streets.

Akhilesh Yadav has realised the ongoing Bharat Jodo Yatra of Congress leader Rahul Gandhi is  helping  the Congress. Reaching out to masses on streets with public issues was the only way to spread the message of party and gain politically in the elections.

Akhilesh Yadav’s SP won  in 2012 assembly polls and came to power after he led cycle yatra in the state and covered the state. He was young and fresh face of the party which motivated masses to bring Samajwadi Party to power.

Akhilesh’s father and founder of Samajwadi Party Mulayam Singh Yadav also formed Krantikari Morcha in late eighties and toured the state in Kranti Rath which paid rich dividend and people installed him as the chief minister of  the state.

It would be worth mentioning here whatever success Akhilesh Yadav got in terms of vote share and number of seats in 2022 assembly polls that was due to his rathyatra which toured the state and was able to mobilise the people in favour of SP. Besides hitting the streets, Akhilesh Yadav is busy revamping his party in a big way. He has dissolved all state and district units to bring youth and give them responsibility to spread the message of party.

Akhilesh Yadav has also announced to organise national and state conferences later this month. He has given responsibility to his uncle Prof Ram Gopal Yadav to make necessary arrangements. As of now, Samajwadi Party is in alliance with Rashtriya Lok Dal of Jayant Choudhry which has  good  influence on powerful  jat community in Western UP.

Akhilesh Yadav has parted company of Mahan Dal and Suheldev Bhartiye Samaj Party of Om Prakash Rajbhar and his uncle Shivpal Yadav after bitter experience in 2022 assembly polls.  But SP is looking for new partners and it will be interesting  to see who join before  the 2024 polls.

Former chief minister Mayawati too is busy in making preparations for Lok Sabha polls silently. Mayawati and Bahujan Samaj Party are not known for hitting streets on public issues. After worst ever performance in UP Assembly polls with only two percent of vote share and single seat, Mayawati is facing biggest challenge in her political career to rebuild the party to face Lok Sabha polls.

There have been series of review meetings of senior party leaders with Mayawati establishing dialogue with important leaders. Mayawati has given more responsibility to her brother Anand and nephew Akash to take important decisions to run the party. Mr Satish Mishra who was brahmin face of the party and commanded number two position in the party, is nowhere to be seen in party meetings.

Ever since BSP was launched in 1984 by Kansiram, the party believed in keeping the interest of bahujan samaj on the top. It was only in 2007 Mayawati started giving importance to powerful brahmin community.  Mayawati has revived the system of bhaichara samiti to win over other communities. BSP national president Mayawati witnessed large scale exodus of senior leaders and workers in last few years. Now it would be very difficult to find senior leaders who were inducted during the time of founder Kansiram.

Mayawati is also facing credibility crisis as she became Chief Minister thrice with the support of BJP. Even now she is seen as advising the national and state governments rather being critical on the issues of governance. (IPA Service)