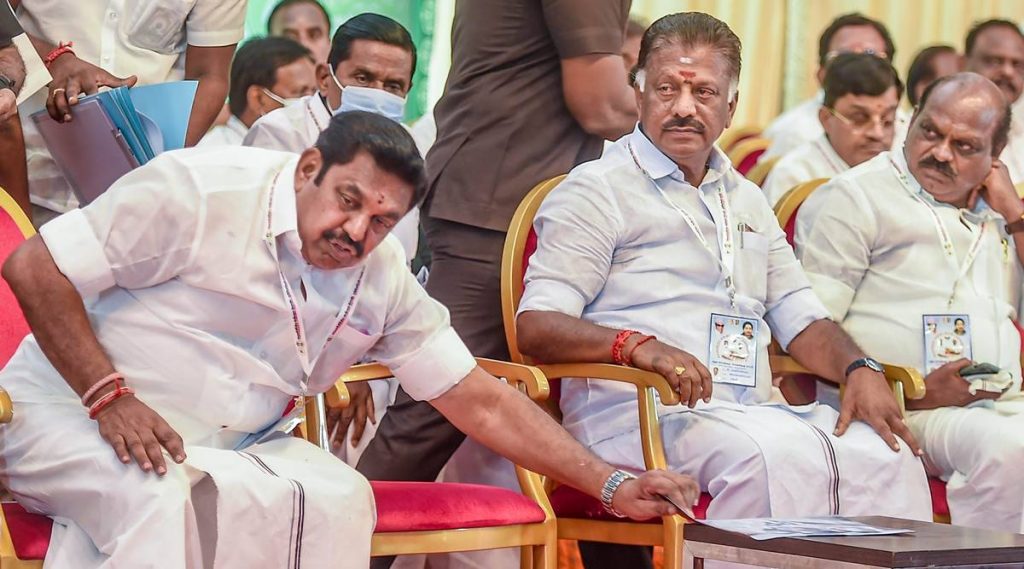 Just as Shiv Sena split in Maharashtra, the AIADMK in Tamil Nadu is engaged in a power struggle between two former chief ministers, E. Palaniswami (EPS) and O. Panneerselvam (OPS). In a fast-developing drama, the EPS camp would like to relieve OPS of his present post of party treasurer and deputy leader in the Assembly. After losing the Assembly elections last year, and successive local body polls, the EPS camp feels that the dual leadership has “only hampered the working of the party.

Amid its golden jubilee celebrations, the AIADMK cadres are confused. Five years ago, when a relatively unknown EPS was chosen as CM candidate by ex-AIADMK general secretary VK Sasikala, EPS and OPS  reached a truce in 2017 to establish dual leadership. Together they steered the party and government successfully for four years, braving a pandemic.

After five decades, AIADMK is facing a bleak future. Carefully built by two former chief ministers- founder M.G. Ramachandran and his protegee J. Jayalalithaa, the Dravidian party is undergoing a  bad patch. There is a disconnect between the leaders and cadres. Some of the party’s challenges include  lack of charismatic leadership, factionalism, and a hard look at how it handles its ally BJP, which is trying to replace them as a counterforce to the DMK.

What is amply clear is a gradual erosion of AIADMK base in the post-Jayalalithaa era. The AIADMK’s vote share stands at 25.47 percent in the urban local body election, while it received 33.29 percent of votes in the Assembly.

The charismatic matinee idol MGR established the AIADMK on October 12, 1972, two days after the parent party DMK expelled him. He served as the chief minister from 1977 till his death in 1987. He chose to be on the right side of the Centre and made compromises with the Prime Ministers, including Indira Gandhi. The philosophy of DMK founder and former chief minister CN Annadurai became the founding principle of the AIADMK. MGR’s successor Jayalalithaa aligned with BJP and Congress at different times and became chief minister six times with interruptions.

It is not the first time the AIADMK is facing a split. Following MGR’s death in 1987,  there was a  power struggle between one faction headed by MGR’s wife Janaki and the other by Jayalalithaa. While Janaki succeeded MGR as Chief Minister for a short period, both sections lost miserably to the DMK in the 1989 polls. Then Janaki withdrew from politics, and Jayalalithaa became the sole leader.

OPS and EPS have taken their fight to the General Council, which has the power to elect an interim general secretary, not a permanent one. That was how Sasikala donned the post following the death of Jayalalithaa. But, EPS and OPS removed Sasikala from that post and created new positions such as Coordinator and Co-coordinator, which are also temporary.

In the current situation, OPS got a midnight hearing before Tamil Nadu High Court – to restrict discussion points in the general council meeting. He thus stopped the party from elevating Edappadi K Palaniswami (EPS) as the sole leader at the June 23 General Council meeting. However, the discussion turned ugly when clashes broke out between the two camps.

OPS blamed vested interests and asserted that the General Council and Monday’s meeting of top AIADMK functionaries were illegal. Similarly, a proposed GC on July 11 is also not legal. The GC is going to take place    and OPS is sure to be removed.

After Jaya, the BJP has remote control over AIADMK from the Centre. The change was abundantly clear on issues like NEET, New Education Policy, three language policy (giving the nod first and then withdrawing it after the protests), the CAA, farmers’ law, handling of the pandemic, etc.

BJP is not able to penetrate much because of the ideology. In Tamil Nadu, the Dravidian-Tamil sentiment is strong. So just like Congress, the BJP is riding piggyback on AIADMK. The Dravidian parties have had tie-ups with the two national parties at different times.

OPS tried to rope in BJP, which had backed him earlier, but Prime Minister Narendra Modi refused to give him an audience last week. A disappointed OPS came back from Delhi and is resorting to other measures to survive.

In any political party, the cadres decide who gets to lead the party, and, in this case, Panneerselvam is certainly not their first choice. It is about time he accepts the fact and works towards gaining acceptance of the 1.5 crore AIADMK cadre as their leader, as, after all, courts cannot get him back to AIADMK workers. (IPA Service)