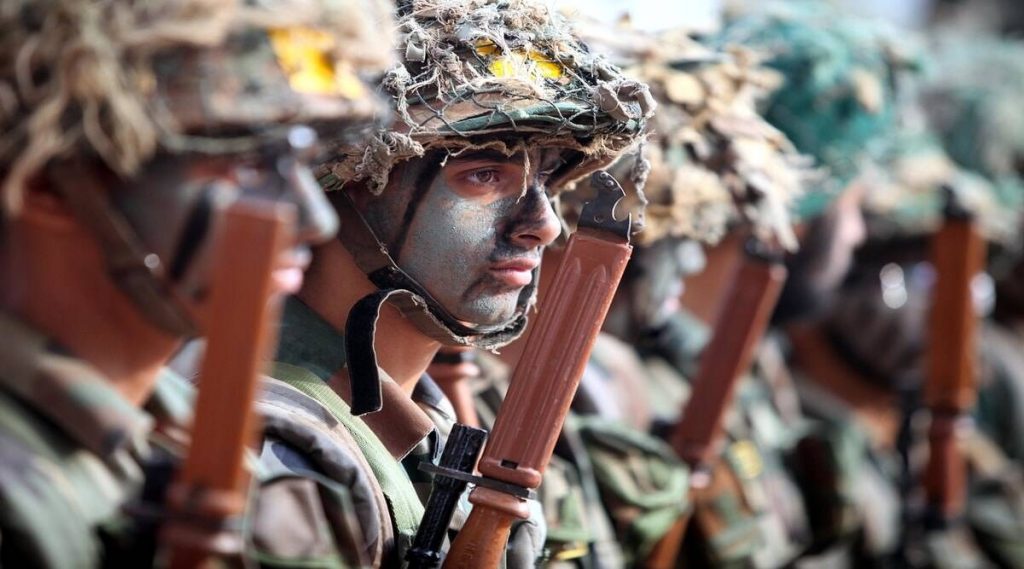 The military recruitment drives are ‘festive times’ in some of the states in north India. Village elders bless the youth going for the tests. Women folk would send the sons (now daughters too) with tilak and best wishes. In some of the families it is the third or fourth generation that is now aspiring for ‘Vardi’ (coveted uniform). ‘Fauj’ (military) is almost like their second religion. Many movies of Bollywood reflect these sentiments. Army men brought not only honour to their villages but also prosperity and development. Somewhat similar culture prevails in some of the areas down south from where regular recruitment for the army takes place.

All this changed with the recent decision of the NDA government to completely change the form of recruitment of soldiers to the three wings of the armed forces of India. Like all their programmes, this programme is also high in volume and low in content. The new scheme is being called ‘Agnipath’ the path of fire! The name comes from Hindu philosophy which means a difficult yet sacred path. And the young recruits who would go by this path will be called, “Agniveer”, the fire soldier! That is the speciality of a propagandist government; whatever you do, talk a lot about it!

For decades soldiers were being recruited from towns and villages of this great country. Our soldiers have given their best services to the motherland with their exemplary sacrifices and highest levels of valour! Yet, with all simplicity they all called themselves just the citizens of the country. And a grateful nation took care of these brave sons and their families till the end. The families of the martyrs (soldiers) were taken care of by the state with pension and medical facilities. We all lived like a big family. Not now!

Modi government has categorically said no to the pension of the Agniveers! Like all their privatisation schemes, the BJP say a big no to ‘Welfare of the soldiers or their family. Fend for yourself is the new mantra of the new government.

An army does not win only by force of the weapons. If this had been the case, all armies of the world would be same in terms of the effectivity of their operations. But then army wins a battle on the strength of the commitment and levels of the motivation of its soldiers. This comes after a long tireless training of the new recruits that goes on for more than two years.

As the Agnipath scheme is only for four years in the first step, many experts are concerned about the levels of motivation and commitment in absence of the proper training. Lt. General D. S. Hooda (retd) expressed his concern in an interview with ‘The Hindu’ (June 24, 2022). He said, “ … Will people who join only for four years, and who are possibly looking at the military as a stepping stone for future career, have the same levels of morale and motivation that you find among soldiers who are permanently in the military?”.

Earlier the youth joined the army for lifetime. The entire family would become a military family. With a solid backing of the welfare apparatus of the military establishment the brave soldiers would not hesitate even for a moment in putting their lives at the service of the motherland. This brought in a high level of commitment and professionalism in the Indian army, navy and the air force. The country cared for the soldiers and the soldiers gave their best to the nation.

The Agnipath scheme is like a contract for four years. Some retired officers opined that it takes four or five years for people to be trusted on the systems. For about four years the new recruits are under the regular supervision and guidance of a senior person of the battalion or the command.

Unfortunately in the Agnipath scheme, by the time an airman is completing his or her learning it would be time for 75 percent of them to say good bye. A lot of talent would be wasted. And also, a lot of money. So at all time most of the soldiers in the army, navy or the air force would be raw. What will happen to the combat compatibility? That is an untested question so far as the new scheme called Agnipath is concerned.

It would be shocking for many to know that the Agniveers will be forming a distinct group in the military with a different insignia on their uniforms for the four years. Only those who are retained (25 percent) beyond the four year period of Agnipath scheme would be given regular Army/Navy/ Air force insignia. This type of demarcation has never happened in Indian military, that has always stood on the principals of equality, overcoming the barriers of caste religion and language. This type of demarcation between Agniveers and the regular military personnel could be demoralising. A lot of work has to be done to nullify the impact of such a demarcation. Experts are divided on the impact of such an arrangement.

Another area of concern is the period after the completion of four years. Three fourth of the force would move out (no retirement, it’s retrenchment) with some amount in hand. No pension, no social support, and no identity. Very soon the lure of military would wane and there will be dearth of healthy competent men/women in our armed forces.

The spokesperson of the BJP in spite of their best efforts could not hide the real intention of the scheme. Now and then they keep spilling out the beans. All those (75percent) who would be shown the door after four years in the force, would be given priority in security services of the private sector. Thus the real beneficiaries of the Agnipath scheme would be the corporate sector who would get trained security personnel for their enterprises at the expense of the taxpayer. Without spending a single rupee, the corporate friends of the present government would get skilled and trained guards for their gates!

It has been reported that members of RSS shakhas are being motivated to join Agnipath Scheme in large numbers. This would kill two birds by a single stone. Firstly, it would send a signal that youth have accepted the scheme, showing full faith on the designs of Narendra Modi and his government. Secondly the RSS would be able to establish deep relationship with the three wings of Indian military. The second one could have alarming consequences. Till the Modi regime came, our military was politically neutral. The armed forced had allegiance only to the motherland. BJP government has changed all that. Today the Generals also speak the language of the party in power. This is dangerous!

Sociologists believe that a long term employment brings peace and prosperity to a society. The best way to minimize crime in the society is to educate and employ all the young people of the society. Long term meaningful and purposeful engagement reduces crime to a great extent. Earlier when a soldier retired after putting up 15 or 20 years of service, he would have a solid foundation for the development of his family and children. While pension took care of the basic needs of the family, welfare backing of the military took care of his children and parents. The ex-military man would lead a life of dignity in the society and would become a role model for the new generation.

The biggest worry of the sociologists about the post Agnipath scenario is that a large number of weapon trained youth would enter the society without any guarantee of a dignified life. The path they would choose will depend a lot upon the then socio-political situation.

The pressure of a jobless existence could easily break the fabrics of social ethos and morality. Add to this the weapon capability. Assured of a dignified post retirement life the ex service personnel rarely pic up fights. Guns, never. They usually keep away from troubles. Social welfare keeps all tension away from them. But then the Agnipath is an entirely different scheme. There are no post-retirement benefits. In fact there is no retirement. It is just a ’good bye’ without benefits. The money that is being advertised is actually a deduction from the salary of the Agniveer. It is his own money to which the government will add its contribution. Every moth Rs 9000 are deducted from the salary and the government would contribute equal amount.

A young man getting Rs 11 Lakhs at the age of twenty five, without any proper planning is actually a big risk for the ex-serviceman and the society. Added to this is the fact of malleability of one’s character in absence of proper guidance. The only guarantee against any such mishap is the immediate employment of all such ex-service personnel. Former chief of Indian navy Admiral Arun Prakash has rightly asked the industrialists to furnish the figures of the employment provided by them to the ex-service personnel in the recent years. Few industrialists were shouting from their roof tops that they would absorb most of the 75 percent Agniveers afters they would come out after four years.

The wise always listen to better counsel, goes an old saying. This is very relevant in case of Agnipath scheme. When India is facing acute unemployment, Indian military could have raised some hopes. Killing even those hopes is almost betraying the younger generation. Indian military has always done its best under all circumstances because the nation and the society respected the men and women of the military. Today that respect and support is being snatched away by few short-sighted corporate supporting politicians and economists. This could damage the interests of the nation in the long term. When the results of this lopsided model come, it would be too late. There won’t be a return path. Scars would remain.

Agnipath is a road to nowhere! (IPA Service)