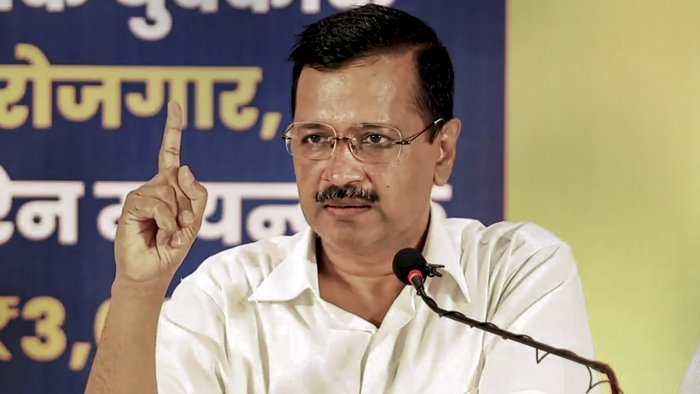 At last a political party other than the Bharatiya Janata Party has caught on that cornering increasingly rabid Hindu votes is half the electoral battle won in Modi’s India. For decades, the “secular” and “communal” Hindus were separated by the Muslim vote-bank with the secular Hindus slowly but continuously losing ground because of the consolidation of “Hindu votes” even as the proliferation of secular parties left the “Muslim votes” divided and infructuous. This allowed the BJP to start the process of monopolizing the Hindu vote-bank, which kept gravitating towards achieving a distinct state of consolidated Hindu majority.

The BJP continues to rely on this core vote-bank while the Modi government strikes out sideways to make inroads into the Muslim vote-bank by mouthing ‘Sabka saath-sabka vikas’, and “we share the same dna” pep talk. Imagine the plight of the Muslims when the opposition parties are so woefully divided in the face of such consolidation.

There is also the long-held belief that Muslims vote en bloc. Maybe, this is not entirely true. The point being made is while there is a constant consolidation of Hindu votes for the BJP, there has been simultaneous division of the Muslim votes, split between several secular political parties, each vying to defeat the BJP on its own steam but ending up defeating each other while handing the BJP victory after victory on a platter.

The last time this happened was earlier this year in the Uttar Pradesh assembly elections. And it will be repeated unless the non-BJP political parties take a leaf out of Arvind Kejriwal’s AAP-playbook and strike where it hurts the BJP most—at the BJP’s Hindu vote-bank. That does not mean dividing Hindu from Hindutva, which is no different from separating secular from the communal, a defeated strategy.

Painting Hindus with the communal colour has boomeranged. Today’s aspiring generation of Hindus don’t like to be labelled perpetually and entirely “communal”. Larger and larger chunks of voting-age generation X (Gen Y?) have been gravitating to the BJP for want of another “Hindu-party”, which the Congress wouldn’t want to be, and which the Samajwadi Party, the Bahujan Samaj Party and the Trinamool Congress did not want to be at the cost of alienating each their own chunk of the Muslim vote-bank collective.

In Delhi, and even in Punjab, AAP did not deviate from this largely followed secular playbook though Kejriwal did stray from the chosen path by embracing Hanuman! But in Gujarat, there is a marked change in AAP strategy, and tactics—the AAP wants to make inroads into the BJP’s captive ‘Hindu vote-bank’, to get hold of which Kejriwal will go to any extent, even become ‘Krishna’ come to slay the Gujarati ‘Kans’.

In the 75 years since Independence, there hasn’t been a more brazen and politically shameless party than the Aam Aadmi Party. The AAP has proved time and again in its short life that principles are for the birds and bees. And for the first time in 27 years of the ‘Gujarat Model’, Prime Minister Narendra Modi is facing an adversary who is not only slippery as an eel but also with mastery over shaping/shifting imagery. For example, there may not be many Buddhists in Gujarat but there are the Scheduled castes and after the AAP conversion stunt in Delhi, Gujarat’s Dalit have something to chew on, while the Bharatiya Janata Party has something to worry about.

Next, Kejriwal got atop the Krishna rath and proclaimed himself ‘Krishna avatar’ “born on Janmashtami” to slay ‘Kans’, beaming Hindu-love straight into the lovelorn eyes of Hindus including Gujarat’s garba-dancing Hindu mahila-voters who will not miss the imagery. Add to that Modi’s inability to bridge the age with Krishna and Arvind Kejriwal’s aggressive posturing takes on meaning.

For the first time in eight years of fighting elections and winning them, too, Modi is at a loss for the right words. Besides, he is missing Rahul Gandhi, with whom he was comfortable with as an adversary. Rahul Gandhi is on a mission and has no time for Modi, which appears to be troubling Gujarat’s mahapurush and adipurush, both rolled into one!

Modi sees a “silent” conspiracy in the Congress party’s absence from the ‘yudh’.

And he’s telling the Gujarat electorate to beware of the Congress game-plan. Modi’s obsession with Rahul Gandhi cannot be replaced with a fetish for Arvind Kejriwal, who talks the same language that Modi does, and that in idiom that is giving Modi a run for his dictionary. AAP is pounding the pavement for the BJP’s Hindu vote-bank by invoking Lord Ram and Lord Krishna even as the BJP peppers Gujarat with posters labeling Kejriwal “anti-Hindu”.

The AAP convener is not the goody-goody Rahul Gandhi-type. Arvind Kejriwal grew up in the rough and tumble of the NCR neighbourhood. Manish Sisodia’s government schools are his domain, not Doon School and St. Stephens. “If elected I will send whoever wants to, on an all-paid pilgrimage to Ayodhya,” says Kejriwl, and it was Prime Minister Narendra Modi who laid the foundation stone for the ‘Bhavya Ram Mandir’ in Ayodhya. Kejriwal doesn’t care who hears him shouting “Jai Shri Ram” and “Jai Shri Krishna” as long as Prime Minister Narendra Modi is up the Sabarmati without a paddle to bail him out. (IPA Service)

Shinde faction gets ‘two swords and shield’ as symbol
Posting....