A Historical Perspective To Rupee Falling To Its All-Time Low 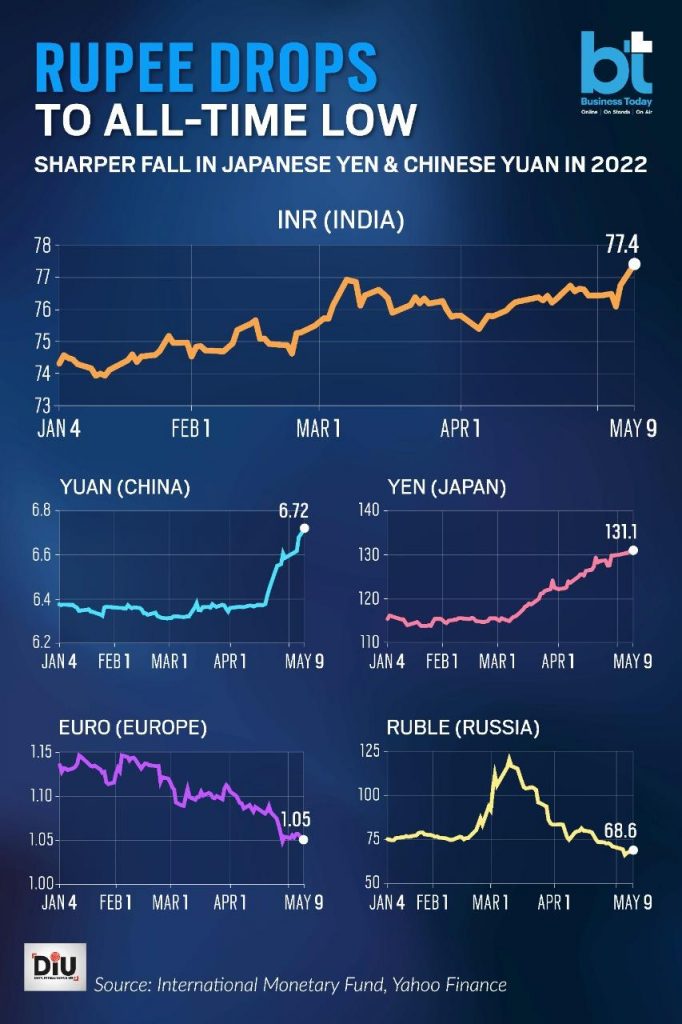 The rupee hit a historic low this week. The immediate provocation was, of course, a signal from the US Federal Reserve that it will persist with high interest rates so as to try and control inflation. The dollar has been steadily climbing in recent times, driven by an exodus of capital into dollar-denominated assets and at the cost of almost every other major currency in the world. Accordingly, the Indian currency fell to a new low of 80.11 against the dollar, lower than the previous all-time low of 80.06 recorded in July.

Reserve Bank of India has explained the rupee’s behaviour as one of the manifestations of the global outlook getting clouded by recession risks and the high risk aversion that has gripped financial markets, producing surges of volatility, sell-offs of risk assets and spill-overs, including flights to safety and safe haven demand for the dollar. As a result, emerging market economies are facing retrenchment of portfolio flows and persistent downward pressures on their currencies.

RBI has been closely monitoring the liquidity conditions in the forex market, stepping in to alleviate dollar tightness with the objective of moderating the rupee performance to ensure orderly market functioning. It has also undertaken several measures to enhance forex inflows while ensuring overall macroeconomic and financial stability.

Macroeconomic and financial stability have been key factors that determined the performance of the currency. The new level is also a reflection of the deteriorating forex reserves situation.  As RBI went ahead with its market stability initiatives in the face of the greenback surging to over two-decade highs, forex reserves slumped to the lowest in over two years. The forex war chest has declined every single week since early July, falling for 20 of the 26 weeks since Russia invaded Ukraine in late February. RBI’s weekly statistical data showed the reserves fell by $6.687 billion to $564.053 billion in the week ending August 19, marking its lowest in over two years.

From a historical perspective, it can be seen that whenever the trade balance and macroeconomic stability was affected, the rupee got hit. In this respect, the value of the currency has been a true indicator of the economic situation. The slump in food and industrial production in the 1960s, India’s wars with China and later with Pakistan, triggering a balance of payments crisis, the serious economic crisis of the 1990s, when the country was on the verge of default in debt repayments and meeting external trade obligations, were milestones in the performance of the rupee. These have been accompanied by a proportionate fall in the value of the currency.

The first major decline was when the government devalued rupee against the dollar from 4.76 to 7.5. The crisis of the 1990s saw the currency being devalued in two tranches of 9 percent and 11 percent, taking the rupee down to around 26 per dollar. According to analyst calculations, since the economic reforms of 1991, the rupee has been depreciating at the rate of 3.74 per cent compound annual growth rate against the dollar. Between 2000 and 2007, the has been relatively more stability in the rupee in the wake of a step-up in foreign investments, but with the global financial crisis of 2008, things began to deteriorate again. Accordingly, from 2009 onwards, the value kept falling from 46.5 to today’s level.

Even as the dollar is continuing its relentless push forward, a new development in the global currency markets is giving hope to emerging market currencies, including that of India. And this is a steady decline in the share of dollar in the global forex reserves, which means there has been a proportionate jump in trade in oil and other commodities using currencies such as the Renminbi, Hong Kong dollar, and the UAE dirham at discounted rates. Not to be left behind, the RBI has also announced plans to reduce the dominance of the US dollar through a mechanism to settle payments for international trade in rupees, particularly in the wake of the Ukraine war. This in the long run could help in increasing the clout of the rupee in the international markets.

RBI believes that the 4.1 per cent decline in rupee against the US dollar during the current financial year so far is quite realistic and that overall India’s growth prospects remain strong and resilient. Despite headwinds from geopolitical developments, elevated crude oil prices and tighter external financial conditions, high frequency indicators point to an ongoing recovery in several sectors. External sector has exhibited resilience and viability on the back of robust exports of goods and services and rising remittances, as a result of which the current account deficit is modest. Also, all capital flows barring portfolio investments remain stable and an adequate level of reserves provides a buffer against external shocks. (IPA Service)