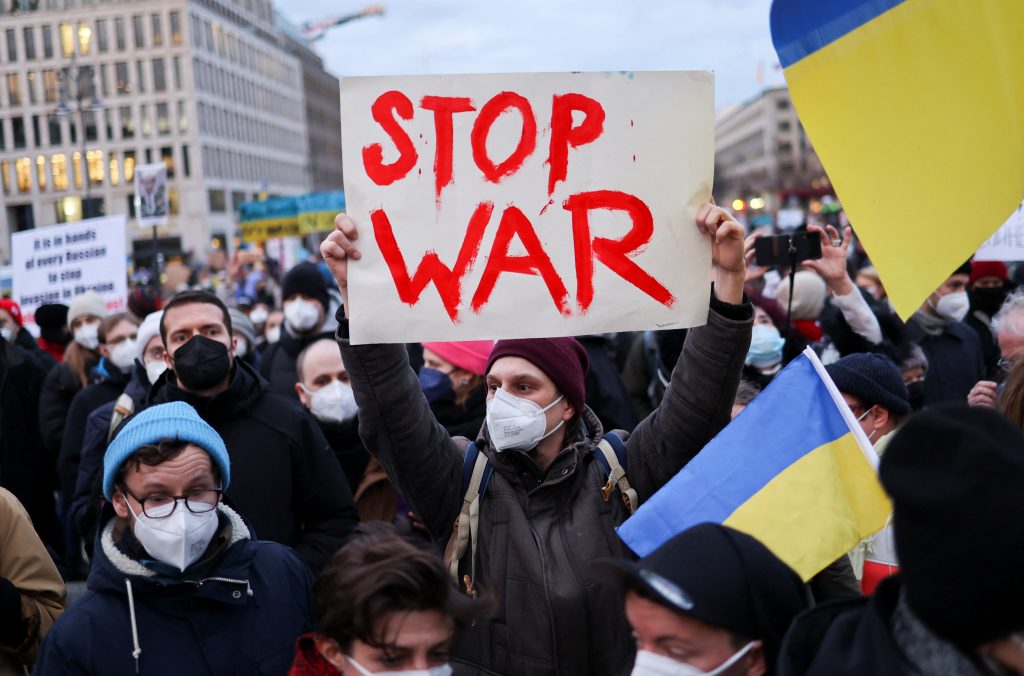 For the last few days, I have been following the news coming from my home country of Ukraine in disbelief. I have watched hospitals, residential buildings, and even kindergartens in my home city of Kharkiv being bombed. I saw its central square in ruins. It doesn’t feel real, and yet it is.

I dread the news, but I can’t stop watching it. Because I’m seven hours behind Ukraine in New York, the worst of it starts in the afternoon and early evening before I even try to sleep. It usually keeps me up into the early hours.

In the mornings, I get in touch with family and friends, who sometimes spend the nights in underground parking lots and subway stations. The concise messages reassuring me that people I love are safe and alive are the only thing that brightens my day.

My parents managed to leave Kharkiv before the roads became too dangerous to travel. When they heard the first explosions on the outskirts of the city, they drove to a village in the Poltava region where my dad grew up and where my grandma still lives. They don’t have great connection there, so every day they walk to the top of the nearby hill to get in touch.

There isn’t much to say, or at least not much we want to say out loud, but the lack of sirens or explosions in the background is a relief. Countless lives are being uprooted every minute of every day of what feels like the longest week in my memory.

My support for Ukraine’s sovereignty, its democracy, and its right to exist is unwavering. By invading a neighbouring country against its people’s will, Vladimir Putin’s government has not only broken international law — it has shown total contempt for the vision of a shared world of dialogue and negotiation on which those laws were based. It is an act of chauvinism and a crime for which he will rightly be remembered.

But the reality is that war had been taking place for the past eight years in the eastern and southern parts of Ukraine. That conflict was complicated in cultural and historical terms, with many thousands killed, and we must be prepared to acknowledge that. Doing so doesn’t make you an agent of Putin, it just means you are serious about finding a path out of this tragedy.

It is also possible to acknowledge this reality without invoking falsehoods about ethnic cleansing of Russian-speaking Ukrainians in those regions. Those claims are distractions contrived by the Putin government to justify the unjustifiable. The global antiwar movement, which has a role to play in limiting the death toll in the days (and I can only hope not months or years) to come, must not get caught in the trap of repeating untruths.

It is easy to feel powerless when watching a war in your home city; it is normal to not have all the answers. But there is a lot of clarity when it comes to the immediate and universal needs of those in the war zones. Governments must open their borders to refugees and waive visa requirements. It is a scandal that many, including Britain and America, have failed to do so. Families across Ukraine are facing impossible choices today, and they deserve the right to know they can find safety.

Our governments must also take action to provide humanitarian aid to Ukraine. Those hiding out in bomb shelters across our cities should not also find themselves without access to food and water and the basics of life. Those with the means to do so can also support humanitarian efforts directly through the Disasters Emergency Committee or trade unions like the CWU.

This Autumn, I was able to travel home for a long overdue visit. How lucky I was to spend time there, to see its people full of life, resilient as ever, even amid a prolonged pandemic that hurt Ukraine’s people and its economy badly. It is heartbreaking to think that I may not be able to return again for a long time.

Many of those who decide not to flee today can’t imagine not being able to come back to the places they call home. But, looking at the news, it seems increasingly likely that will be the case. While Ukraine’s people continue to show incredible resilience and bravery, it will take years to rebuild what has been lost. Both for today and for the future’s sake, we must pressure governments around the world that are praising the human sacrifices of this war to cancel Ukraine’s foreign debt.

I desperately wish there were more actionable and straightforward solutions to the war itself. But there are no easy ways out of this crisis. Leaders across the capitalist world only know one response at moments like this: to escalate and flood war zones with weapons. They talk in geopolitical terms about “imposing costs,” exposing the reality that they think only about advancing rival interests on the world stage.

It is appalling to watch the destruction in Kharkiv, Kyiv, and beyond. But it is also easy to imagine how a direct confrontation between Russia and NATO playing out across Ukraine might end. In this new reality, weighing different horrifying scenarios against each other feels like an impossible but inevitable task. The goal of ending the conflict as quickly and with as little bloodshed as possible must be kept front and center. There needs to be a consistent antiwar movement that argues at these moments for de-escalation.

In Russia, this movement is expressing itself against all odds. Antiwar protestors are coming out in significant numbers to condemn the Putin government’s actions, at great risk to their own lives. They now face draconian prison sentences for doing so. It is a reminder to all of us that this isn’t a conflict between Russians and Ukrainians but one driven by a criminal elite that is also oppressing the working class of its own country.

Because of Putin’s war, ordinary Russians will face significant hardship. That will be increased by many of the West’s sanctions. Eighteen million people already lived in poverty in Russia before this crisis; driving millions more into poverty cannot be the answer. One of the greatest hopes for bringing this war to an end is the Russian people themselves. Working people across Russia have no interest in brutalizing Ukraine. They have deep historical ties to our country and many of them have family in Ukraine. They do not want their sons to die there.

But we can’t hope to mobilize the opposition to this war that the Putin government is trying to suppress if we are also making threats of our own to drive Russians into destitution or worse. That is why the idea of international solidarity is not just a left-wing talking point. It can be a real force in the world, and it must be the basis for the antiwar movement. That means resisting nationalist narratives that seek to demonize all Russian people for Putin’s brutality.

The bravery of the Ukrainian defenders should be celebrated, but they are not the only ones who deserve our praise. The emergency and health care workers who care for the many injured, the shopworkers who keep food available where they can, the solidarity activists who shelter and drive refugees to safety — there are so many working-class people who we rely on in times of disaster.

When I grasp for clarity in this rotten reality, I have to remind myself that there are more of us than there are autocrats or oligarchs or warmongers in this world. In reality, there isn’t any hope — in Ukraine or elsewhere — for a world in which our only protection against one set of thugs is the war machine of another.

Our only hope lies in a worldwide movement against militarism. That case is hardest to make at moments like these, when every feeling in your body wants to see Putin militarily defeated, but it is also now when it is most important. To get to a world of peace, we must all use our leverage against war where it exists, in our own countries.

When I joined the demonstration on the streets of New York last weekend, at one point the people around me broke into a chant that I remember from my childhood, one of the many turbulent periods in Ukrainian history. Разомнасбагатоiнаснеподолати loosely translates to “United we are many and we won’t be defeated.”

Today that unity must be international. That is the only way to approach the task of stopping war — because what happened to my family in recent days will happen to many more across the world in the weeks, months, and years to come. (IPA Service)

Russia-Ukraine Crisis Brings Out The Need For Reform Of International Law
Posting....