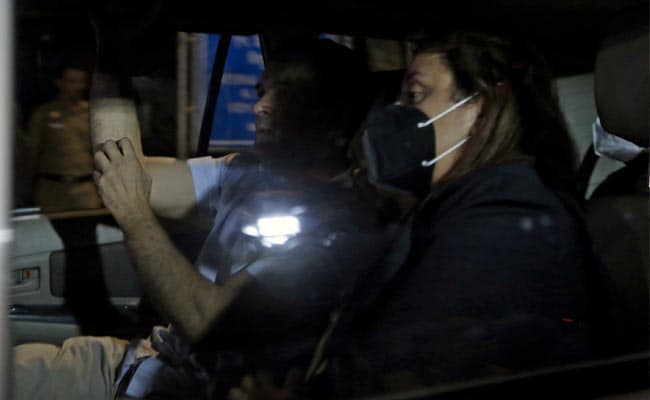 Congress’s Rahul Gandhi walked out of the Enforcement Directorate offices after over nine hours of questioning in the third straight day today in an alleged money laundering case connected to the National Herald newspaper. He will be questioned again on Friday — a day’s exemption he asked for having been granted by the agency, sources said.

Sources also said the agency is recording an audio and a video version of his questioning. The statement is later typed up and is signed by him and the Investigating officer.

Over the last three days, Rahul Gandhi has been questioned for more than 30 hours. His mother and Congress chief Sonia Gandhi, who is hospitalised after testing positive for Covid, will also be questioned after her health improves.

Outside the ED offices, meanwhile, the Congress has been on a collision course with the Delhi Police, with top leaders and workers of the party continuing their protest against what they called the “vendetta politics” of the ruling BJP.

Even today, senior leaders, including Sachin Pilot, were rounded up and detained by the police.

The top leaders of the Congress — including KC Venugopal, Bhupesh Baghel and Randeep Surjewala — said the police also barged into the party headquarters from where they detained workers and leaders.

Cellphone videos showed some of the Youth Congress and Mahila Congress workers being dragged and taken away in buses.

Pilot was also picked up from near the party headquarters. “They shoved us into the bus and I don’t know what next they plan to do with us. This sort of detainment has never happened before. This behaviour in a civil society is just not done,” he told NDTV in an exclusive interview.

The Delhi Police, however, have denied the Congress claims.

The Enforcement Directorate’s questioning is about the Gandhis’ dealings with the Young India company, which took over AJL, which runs the National Herald newspaper. The Young India took over 800 crores in assets of AJL and according to the Income Tax department, this should be considered an asset of Young India shareholders Sonia Gandhi and Rahul Gandhi, for which they should pay tax.

The Congress has claimed that the Young India is a non- profit, and so the shareholders cannot make any money from its assets.

The Enforcement Directorate has argued that Young India has not done any charitable work. Its only transaction was the transfer of AJL’s debt. The Congress has countered that the newspaper is the charity.

The Income Tax order has been challenged in court and is pending in the Supreme Court.