Trinamool Congress May Be Back To Opposition Camp Along With Congress 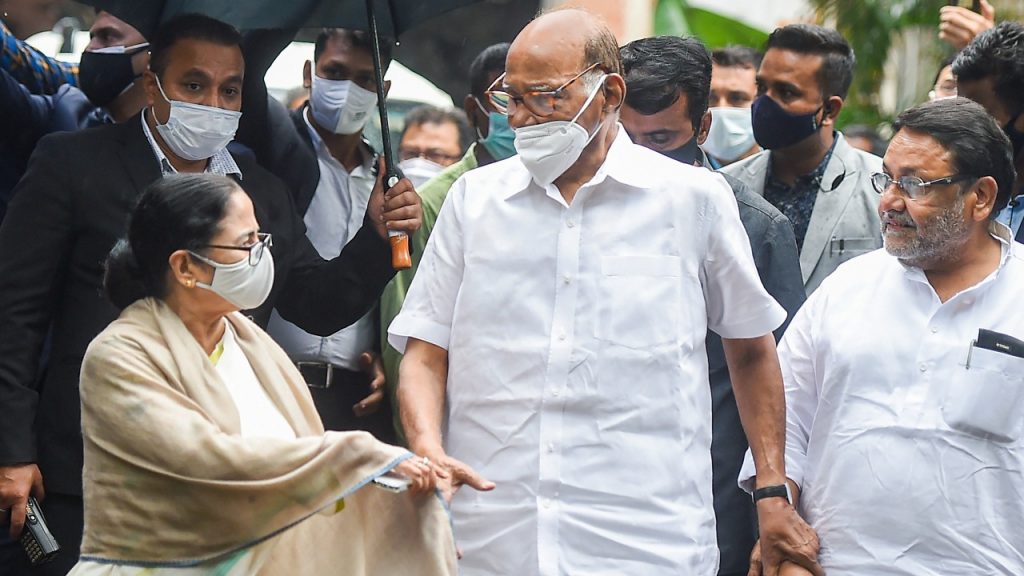 A thaw in the relation between Congress and Trinamool Congress seems to be in the offing after it had hit a new low post 2021 state Assembly elections. Strangely enough, indications that the two outfits who had turned from political allies to bitter opponents are not averse to smoke the pipe of peace has come from afar.

It was elder statesman Sharad Pawar from whose lips the news fell. Pivot of the in the making of a united Opposition front that NCP chief Pawar is, neither the TMC nor the Congress have dismissed it as kite flying.

Having swept 2021 Assembly elections, Trinamool Congress chief Mamata Banerjee’s electoral triumph changed the composition of Opposition politics in West Bengal. The BJP emerged as the principal Opposition party with neither 77 MLAs while for the first time since independence neither left nor the Congress were represented by a legislator.

Relations worsened between Trinamool and Congress and Left after chief minister, Banerjee accused the two outfits of colluding with BJP to unseat her government. In fact, Banerjee was hailed as the most credible face of the Opposition camp after TMC’s spectacular poll victory.

But in an unexpected turn of events, Trinamool went on a backfoot after its senior leaders Partha Chatterjee and Anubrata Mondal were arrested by central probe agencies for their alleged involvement in school job scam and cattle smuggling respectively. While Chatterjee has been removed from his post of party secretary general and minister, Mondal continues to be district president of Birbhum though he is behind the bars.

A sum of about Rs 50 crores have been recovered from houses of Chatterjee’s close aide, Arpita Mukherjee. The probe agencies have also questioned the chief minister’s nephew, Abhishek Banerjee and senior minister, Moloy Ghatak

The BJP activists marched towards Nabanna. The Left supporters homed in on Kolkata Municipal Corporation headquarters.

The processionists were drenched in water canon jets and struck by police lathi blows, but both the marches yielded identical political dividends for both the outfits. They helped their respective outfits to regain the limelight.

It is against this backdrop that Pawar announced on 21 September that Mamata Banerjee is inclined to sink her differences with Congress and forge a common front against BJP in the run-up to 2024 Lok Sabha elections. Given the long memories political leaders possess it is indeed a climb down for Banerjee as her party leaders have described Congress to be “a party in deep freeze”.

Reaction of the TMC has been guarded in this regard. While Banerjee is yet to react to it, her party leaders who take their lead from their supremo are tight lipped.

But the TMC’s credibility is under a cloud in the Opposition camp given the TMC decision of not opposing the NDA nominee Jagdeep Dhankhar in the vice-presidential election during which its MPs abstained from voting. It may have been an ideal piece in the practice of real politic, but TMC is no longer in the high perch it occupied earlier.

In fact, a meeting between Prime Minister, Narendra Modi and chief minister, Banerjee triggered a note of caution in the Opposition camp. Later the Prime Minister asking a senior MP whether his party chief was satisfied with the outcome of the meeting further queered TMC’s pitch in the proposed third front.

These factors have snowballed a change in Trinamool leadership’s thought process. The rethink goal is to re-establish the party’s credibility in the Opposition camp and bring it at the vanguard of stopping the BJP juggernaut in 2024 elections.

The slew of raids and interrogations have indeed soiled the TMC’s image. The traction gained by Rahul Gandhi’s Bharat Jodo Yatra has not left the ruling party of West Bengal to challenge Congress leadership in the national level.

Perhaps there will be some deflated egos in. both camps especially in TMC some of whose leaders’ viewpoints are obstructed with regional interests and issues. But given the nature of writ of Trinamool Congress supremo Mamata Banerjee, such objections are certain to be binned.

Some dissenting notes are not unlikely when TMC and Congress start the process of closing ranks. But to look back from the Janata experience to oust the Congress post emergency to the Opposition combine which had Jyoti Basu, Atal Behari Vajpayee sharing a podium, the proposition of Congress and Trinamool Congress campaigning for a common cause cannot be rubbished especially when politics is the art of the possible. (IPA service)