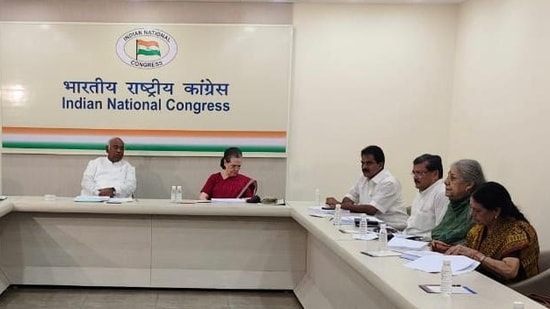 With Mallikarjun Kharge taking over as the new president of the Indian National Congress, a steering committee with 47 members — including Sonia Gandhi, Manmohan Singh, Rahul Gandhi, AK Antony, Priyanka Gandhi Vadra, KC Venugopal, Salman Khurshid and Jairam Ramesh — has been constituted to oversee all party and election matters. However, eyebrows were raised when Shashi Tharoor, Kharge’s rival in the Congress presidential elections, was not been included in the list of leaders forming the committee. The new steering committee is expected to work in place of the Congress’s Working Committee, the highest decision-making body of the party, till the plenary session is held. New members of the Working Committee will be chosen at the next AICC (All-India Congress Committee) session.  While the immediate challenge before Kharge as the new Congress president will be steering the party in the Himachal Pradesh and Gujarat Assembly elections,   to be held within few weeks.. In 2023, Kharge-led Congress will face nine state elections, including that of Karnataka, Telangana, Rajasthan and Chhattisgarh. Another big challenge for Kharge will be setting the platform for the 2024 Lok Sabha elections and fighting the BJP behemoth via direct contest in several states. Moreover, keeping the Congress cadre enthused, and helping shed the image that he’s a remote-controlled chief, are also in Kharge’s plan of action.

After consecutive failures in UP Assembly polls, BSP supremo Mayawati is re-focusing her attention on winning back the support of the Muslims, as part of a strategy to have a large Dalit-Muslim vote combine to help it put up a strong fight in the 2024 Lok Sabha elections. Mayawati has been vocal on Twitter regarding some issues impacting the Muslim community, including some controversial ones, such as the ban on the Popular Front of India, PFI. In a series of tweets, the BSP chief said that the UP government had completed the much-discussed survey of private madrasas dependent on people’s donations by forming a special team, according to which more than 7,500 ‘unrecognized’ madrasas were engaged in imparting education to poor children. These non-government madrasas did not want to be a burden on the government, then why interfere with them, she asked. Meanwhile, influential Muslim leader from Saharanpur, Imran Masood, defected from Samajwadi Party (SP) and joined the Mayawati-led Bahujan Samaj Party (BSP). BSP office-bearers have also decided to field several Muslim candidates in the upcoming local body elections in Uttar Pradesh to reach out to the Muslim voters.

Ahead of the 2024 general elections, Samajwadi Party leader Akhilesh Yadav’s main emphasis will be on Kurmi and other OBC voters. Political observers say that the SP’s Yadav-Muslim base, coupled with the support of Kurmis, can create strong completion for the BJP in many seats in UP. However, SP had an alliance with Apna Dal (Kamerwadi) and Akhilesh wants to alliance with Bihar CM Nitish Kumar’s JD(U) in UP. Nitish belongs to the Kurmi OBC community, and the SP understandably hopes to cash in on this to reach out to OBCs in UP. Meanwhile, Naresh Uttam Patel has been elected as the UP state president of the SP for the second time in a row. The SP’s move is being seen as an attempt to consolidate the numerically-significant backward class voters to rally behind the party. Patel hails from the OBC Kurmi caste, which has a sizable presence in the state’s central and eastern belt, and they can play a key role in elections in the Pratapgarh, Prayagraj, Sonbhadra and Mirzapur regions. Kurmis constitute about 7-8 per cent of UP population. It seems that Akhilesh Yadav wants to pass on a message to other OBC communities to garner support for his party.

Bihar Chief Minister Nitish Kumar might not campaign for the by-elections in Mokama and Gopalganj in Bihar, where his current ally RJD is locked in a straight contest with BJP. However, Nitish showed a wound on his stomach which he suffered on October 15 while he was inspecting the Ganga ghats in the run up to Chhath Puja celebrations. RJD, which seeks to retain Mokama and wrest Gopalganj from the BJP, is keen on Kumar lending his political heavyweight to its campaign for the two seats. The voting in by-polls for Mokama and Gopalganj Assembly constituencies will take place on November 3. RJD’s Neelam Devi, who is wife of Bahubali leader Anant Singh, and Mohan Prasad Gupta, are the candidates for the grand alliance. A three-corner fight will be seen in Gopalganj constituency, where Sadhu Yadav is once again a factor, having fielded his wife Indira Yadav as a Bahujan Samaj Party (BSP) candidate. The BJP, on the other hand, has fielded Subhash Singh’s widow Kusum Devi, 62, hoping to ride piggyback on the sympathy wave generated after the untimely demise of the four-time MLA. While deputy chief minister Tejashwi Yadav has fielded an RJD (Rashtriya Janata Dal) man Mohan Gupta, a local Vaishya leader and leading businessman of the district. Tejashwi’s strategy in the Gopalganj by-poll is clearly to divide votes of the Vaishya community, which has traditionally supported the BJP. Amid this optimism, however, a section of RJD leaders in Gopalganj concede that the presence of Sadhu’s wife in the fray may become a stumbling block, as Sadhu could divide the Yadav votes in Gopalganj, to Tejashwi’s chagrin.

JD(S) leader H D Kumaraswamy asserted that his party will not go for a poll alliance with any party for the 2023 assembly election in Karnataka, and told that he would announce the first list of candidates for 123-126 seats. The party will kick-start its ‘Pancharatna Rathyatra’ from Mulbagal in Kolar district on November 1 to spread awareness about the welfare programmes it has framed out for the state if elected to power. Kumaraswamy had headed a coalition government with both national parties in the past, for 20-months with BJP from February 2006, and with Congress for 14-months after the 2018 assembly polls. (IPA Service)