Thank You My Lord For Saying “Whatever Is Right Shall Prevail” 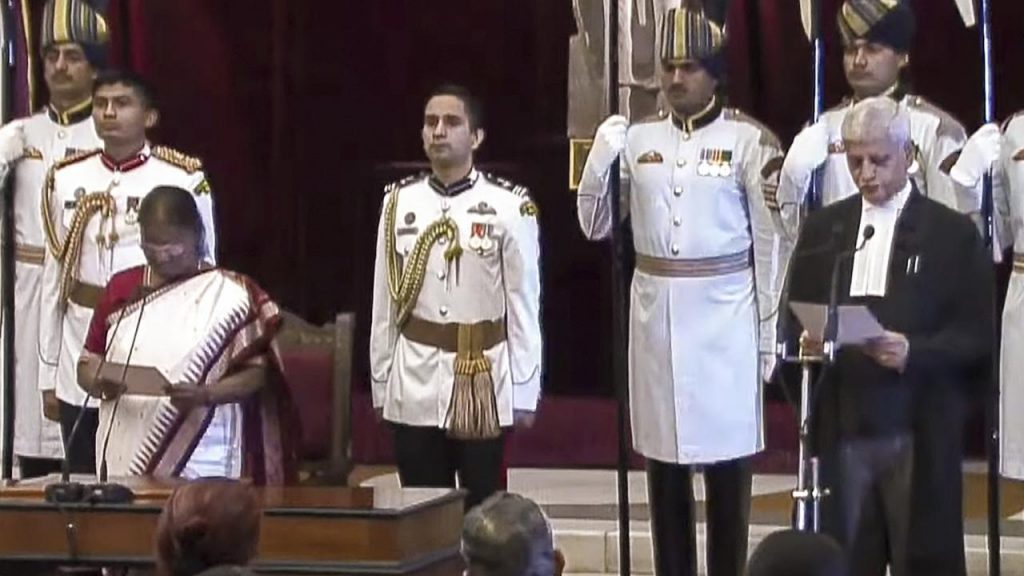 Quoting from our great epic Mahabharata on Sunday at an interaction with the law students, Chief Justice of India U U Lalit said “ Our motto in Supreme Court is ”Yato Dharmastato Jayah” meaning whatever is right shall prevail. Gandhari said this to Duryodhan while giving her blessings.CJI said “That’s the kind of ethos this country stands for. The judiciary is no exception.

Justice U U Lalit took over as the CJI on August 27 this year and he will be retiring on November 8 this year enjoying a tenure of only 74 days in this highest judicial position in the country. But for this new CJI, the short or long term of a tenure does not matter. From day one, he started shaking up the procedures of the apex court by speeding up the process of disposal. In first four working days, the Supreme Court disposed of 1293 miscellaneous cases and 106 regular hearing matters.

The most important is that the bench under the CJI ordered bail for the rights activist Teesta Setalvad which was denied by the Gujarat High Court and the observations made by the bench on the handling of the Teesta bail by Gujarat High Court, is a big step in ensuring that the High Courts and the lower courts do not deny or delay the granting of the bail to those eligible. The order in Teesta case holds the promise of the emergence of a vigilant court at lower level wedded to the principle of justice.

CJI said that the country stands for the ethos in favour of right. Our Constitution is the guarantor for that. But in the last eight years, that spirit of the Constitution and the Indian ethos which the CJI talked, is being violated by the ruling government at the centre led by the Prime Minister Narendra Modi. The right is being wronged, the level playing field in democracy for the political parties is being dismantled. The country has entered a period where the basic rights of the citizens are being denied as has been alleged by the former Supreme Court Justice B. N. Srikrishna in a recent interview.

The Supreme Court has kept pending many crucial petitions in the recent months, but two petitions concerning the Prevention of Money Laundering Act(PMLA) and the electoral bonds are still to get the final consideration of the apex court. As regards the PMLA, the apex court recently endorsed the PMLA as such and recommended review of two provisions. These two are of crucial importance since these provisions are being exploited by the central agencies, especially the Enforcement Directorate (ED) to pounce on the rivals of the present ruling elite. The Indian people who cherish democracy wish that the CJI does immediate follow up on the PMLA provisions review to ensure that the right will prevail over wrong as he wanted.

The PMLA had been enacted first by the Atal Behari Vajpayee government in 2002 in its first full time tenure and subsequently amended by the UPA government in 2012, but both the regimes launched investigations with great caution. Between 2002 and 2014, the Enforcement Directorate lodged only 112 cases in all and made an equal number of searches. There were few searches with political motives in both the regimes but there was no widespread impact.

But things took a bizarre turn after 2014 when Narendra Modi became the Prime Minister. In less than eight years between June 2014 and the end of March 2022, the Enforcement Directorate launched 5,310 cases, conducted 3086 searches, attached Rs 104,702 crore (1.4 trillion) worth of assets (calling these the “proceeds of crime”) and filed 880 charge sheets. But the net result was that it secured only 23 convictions. The Modi government brought about few more amendments to give extraordinary powers to the ED officials.

What was significant during this eight years of Modi period was that the PMLA was used with a deliberate purpose of weakening the political opponents on the one hand and impart fright among the industrialists on the other so that they only donated to the ruling party coffers avoiding any contributions to the political rivals like the Congress Party. A sort of ED terror was in force in the corporate world during this period so that only the BJP got all the high finances from the big and medium corporates to enable the party to steam roll the opposition parties in both assemblies and parliamentary elections.

In the past three years since 2019 Lok Sabha poll, the BJP government has relied more heavily on the PMLA and the ED to break the opposition alliance governments The ED has been used indiscriminately against the opposition leaders, in West Bengal, Assam, Bihar, Karnataka, Maharashtra and Jharkhand. No BJP leader has been investigated in the recent period though money is flowing with many of them and crores are being spent by the BJP leaders to buy the opposition legislators to destabilize the opposition governments.

Under the PMLA, the Enforcement Directorate can call anyone from anywhere in the country for interrogation without having to give a reason, record everything they say without a defence lawyer present, and use even minor discrepancies in their statements as grounds for arresting them. These enormous powers given to ED under PMLS are being used by the Narendra Modi government to destroy level playing field in the elections and cornering the opposition based on the misuse of the central agencies of the government.

Apart from the review of the provisions of extraordinary powers given to ED under PMLA, the pending petition challenging the Electoral Bonds Act, 2018 needs immediate hearing by the Supreme Court. Earlier Justice N V Ramana during his tenure expressed concerns about the misuse of electoral bonds but dismissed the petition to stay the fresh sale of the bonds which only fattened the coffers of the BJP. The state assembly elections are due by 2022 end and also in 2023. The next Lok Sabha elections are scheduled for March/April 2024. The BJP is taking full advantage of the sale of the bonds and this will totally dismantle the level playing field in the coming elections.

The functioning of democracy in the states in India as also at centre is under threat due to this money power. The level playing field has been lost for the non-BJP parties and all these have been possible due to the huge resources mobilised by the BJP through corporate donations, active support of the big traders and the big funds supply by the overseas Indians close to BJP as also the VHP dominated overseas religious bodies. The massive funds through the electoral bonds will only give a big boost to the financial power of the BJP before the 2024 Lok Sabha polls. It now depends on the CJI to ensure his dictum “’whatever is right, shall prevail”” by giving urgent attention to both issues and set the wrongs into right. (IPA Service)