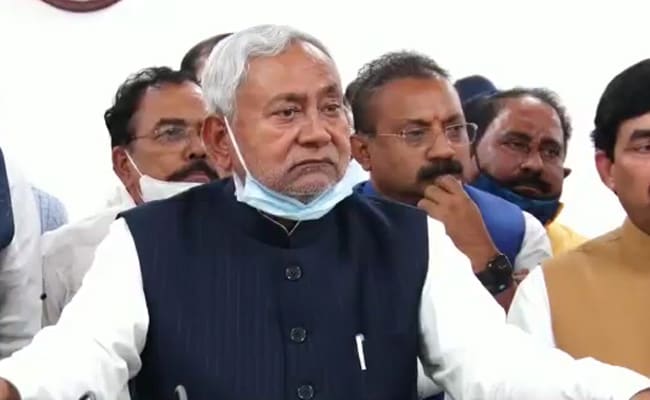 JD(U) and BJP have been allies for the last two decades, save for a four-year period of estrangement from 2013 to 2017.This period coincided with Nitish Kumar retaining his hold over the chief minister’s chair, barring a short period in which Jitan Ram Manjhi led the state. But now, Nitish seems to be facing more opposition from the BJP than the resistance he is facing from rival parties, that too on a multitude of issues. The JD(U) and the BJP are once again engaged in a bitter tussle over Padma Shri Award winner Daya Prakash Sinha, who has compared Samrat Ashoka with Mughal Emperor Aurangzeb. Bihar BJP chief Sanjay Jaiswal has warned leaders of JD(U) to “stop playing Twitter-Twitter with Prime Minister Narendra Modi”, or face consequences. He did not name JDU’s national president Rajiv Ranjan and parliamentary board chairman Upendra Kushwaha, who had recently written to PM Modi urging that the Padma Shri awarded to noted playwright Daya Prakash Sinha be withdrawn over his comments on King Ashoka. The BJP and the JDU have been slugging it out of late over issues like the failure of prohibition in the state, hooch deaths, caste census, special category status for Bihar and alleged insult to Emperor Ashoka. Moreover, the two parties also do not see eye to eye on the National Register of Citizens, National Population Register, uniform civil code and other contentious issues. In addition, JD(U) has decided to go solo in the Uttar Pradesh assembly election. The party will contest the election on Bihar model of governance—social justice as well as share of the OBC and Dalits in governance. Meanwhile, the growing warmth between Nitish and RJD have sparked off speculations that something new is cooking in the state’s political cauldron. As JD(U) leaders are claiming that Chief minister Nitish Kumar is waiting for Uttar Pradesh assembly election results.

WILL FORMER REBEL HARAK RAWAT BE ALLOWED BACK INTO CONGRESS?

CLP leader, Pritam Singh, and AICC in-charge of Uttarakhand, Devendra Yadav, are keen on re-inducting Harak Singh Rawat into Congress, but his re-entry has been delayed because of strong opposition from Harish Rawat. Congress leaders say despite Harak Singh having a vote base in certain pockets of the Garhwal region, his past actions, as well as lack of faith and credibility have been a stumbling block to his comeback. Harak Singh Rawat was one of the nine Congress MLAs who rebelled against Harish Rawat’s government in March 2016, reducing it to a minority. President’s Rule came into force soon after. However, he is repenting his past actions and has expressed his willingness to apologise to Harish Rawat. According to sources, aware of the increasing opposition to his re-entry into the Congress, Harak Singh Rawat met senior party leaders in Delhi to make his case and he assured them of putting at least six seats into the party’s kitty using his considerable clout. While discussions have been sped up regarding his re-entry into the party, a final call on this decision from Congress high command is awaited.

Chhattisgarh Chief Minister Bhupesh Baghel interacted with Congress president Sonia Gandhi, former party chief Rahul Gandhi and party general secretary Priyanka Gandhi Vadra earlier this week, and discussed at length the strategy for the upcoming Uttar Pradesh Assembly polls. Baghel has been appointed as the senior observer for the Uttar Pradesh polls by the Congress. During the top-level meeting, Baghel apprised them of the feedback he received during his recent Uttar Pradesh tour and also discussed the flagship schemes of Chhattisgarh that could be included in the party manifestoes for the upcoming Assembly polls in five states. The meetings have come ahead of a virtual meeting of the central election committee of the party to finalise the next batch of candidates for the U.P. polls. So far, the Congress has announced 125 candidates for the State, out of which 50 [40 %] are women, in keeping with Congress General Secretary Priyanka Gandhi Vadra’s Uttar Pradesh campaign, with the slogan “Ladki hoon! Lad sakti hoon” that attempts to rewrite the usual grammar of election campaigns. By promising that at least 40 percent of the candidates will be women when the election campaign began in 2021 and then by sticking to it, Priyanka Gandhi Vadra has set a new benchmark and she has been reaching out to women voters in UP in the hope that they would help turn the tides for her party.

Uttarakhand’s former chief minister Trivendra Singh Rawat has shot a letter to BJP president JP Nadda just ahead of the announcement of candidate list and offered not to contest the upcoming assembly polls. In a letter to the BJP national   president, Rawat wrote that he wanted to dedicate his time “to ensuring the return of BJP in power in the 2022 polls”. The political buzz is that Trivendra Singh Rawat, who has been in great discontent ever since he was removed from the CM’s post, had sensed that he would not get the ticket from the constituency of his choice and wanted to shift from Doiwala to Raipur. On coming to know of this, close associate of former chief minister Vijay Bahuguna and Raipur sitting MLA Umesh Sharma Kau rushed to Delhi and told top leaders that if his seat is taken away, he would quit. Party leaders then assured him it would not happen and Kau has been given the ticket from Raipur.

Political high drama continues in poll-bound Uttar Pradesh with Azad Samaj Party (ASP) founder and Bhim Army chief Chandrashekhar Azad announcing that he will contest against the present CM Yogi Adityanath for the Gorakhpur Urban constituency. This will be Yogi Adityanath’s premier election for the Assembly, and also of the 34-year-old Bhim Army chief Chandrashekhar. In 2020, he founded the Azad Samaj Party, which announced that Azad would contest the polls to further BR Ambedkar’s motto of ‘Bahujan Hitay, Bahujan Sukhay’. The BJP’s main rival, the Samajwadi Party, is yet to announce its candidate. Gorakhpur is in eastern Uttar Pradesh that accounts for 160 of the total 403 assembly seats. The BJP’s Radha Mohan Das Agarwal is representing the seat at present, having won it four times. The constituency has been a BJP stronghold for decades, especially since the Ram temple movement in the late 1980s and early 1990s. (IPA Service)

Centre’s Decision On Shareholding In Vodafone-Idea Is Crony Capitalism
Posting....