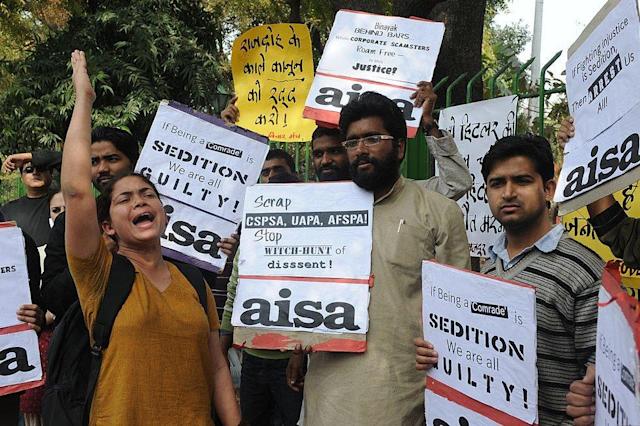 The Narendra Modi government has received a real snub from the Supreme Court, which has overruled the Centres’ objections and stayed all proceedings in sedition cases. A bench headed by Chief Justice N V Ramana also directed on Wednesday that all pending cases, appeals and proceedings with respect to charges framed for sedition be kept in abeyance.  Those who have been booked under the law or are in jail can now seek bail from the appropriate courts.

The landmark Supreme Court decision comes after a lot of flip-flop on the issue by the government, which all along defended the draconian law as an essential tool to protect the nation. The court has thrown out all its objections and decided to stay all proceedings until the validity of the colonial era law is decided for good.

The government’s diabolism on the issue was obvious throughout. And even when it offered to review and reconsider the law in line with the mood in the court, the affidavit it filed in this regard smacked of vulgarity. The affidavit said the government has decided to re-examine and reconsider the provisions of Section 124 A of the sedition law “in the spirit of Azadi ka Amrit Mahotsav (75 years of Independence) and the vision of PM Narendra Modi”.

It is a common practice, particularly in the Gulf monarchies, to announce remission of punishment on auspicious occasions, like religious events such as Ramadan. Such gestures have been shown even in India, where state governments have followed the practice in cutting short jail terms, though mostly for political prisoners belonging to the ruling parties. But it is perhaps for the first time that one is hearing about a whole law being dropped to mark an occasion.

While it does raise doubts about the government’s real intent, it also amounted to indirectly acknowledging that the seditions law is against the spirit of ‘Azadi’, but it nevertheless showed no inclination to let go of it. The British clamped down the seditions law as a repressive tool against the subjects of their colony, and it continued application would mean that the successor government considers itself to be as alien as the colonisers.

The second consideration cited by the affidavit to reconsider the law, which is PM Narendra Modi’s vision is equally bewildering. The existence of a law or its repeal cannot be based on the whims and fancy, the so-called vision, of a ruler, but warranted by the soundness of the underlying legal principle. Anything other than this is frivolous, as far as a law is concerned. So, when the Supreme Court decides that all cases must be held in abeyance, it is obvious that it has more reasons than the PM’s so-called vision or the occasion of celebration to throw out the government arguments as it considers it a bad law.

No doubt, Modi has of late been singing paeans of individual liberty and freedom. As is wont, Modi says one thing, but his government does quite another. Whether it is commitment to the poor or the inclusiveness of ‘sab ke saath’, the consistency is not in adherence, but in variance. The policies of his government have seen the rich grow richer and the poor become poorer, just as the inclusiveness of ‘sab’ has been more and more selective.

There was further evidence of the government’s diabolism when it informed the court that it was not ready to drop the cases already booked under the law, as suggested by the apex court. In fact, the government has staged somersault on the issue after it promised the court that it would defer hearing of the petitions till it reviews the law and arrives at a final decision.

In fact, it has advanced another specious argument for persisting with its stand. Solicitor General Tushar Mehta has told the court that a cognizable offence cannot be prevented from being registered and that once a cognizable offence was committed, it may not be proper to stay the effect of the provision either by the Centre or the court. Therefore, the draft that the Centre is preparing suggests selecting a responsible officer for scrutiny, and his satisfaction is subject to judicial review. The government is deliberately ignoring the fact that an act becomes a cognizable offence only when it is made so and that it is within the powers of the government to make an act an offence in the first place; cognizable or not is a subsequent consideration.

Again, the mischief in making an officer of the government responsible for the decision is not too clever to be missed either. There is judicial review, but the review is about the satisfaction of the officer concerned. As long as the officer is satisfied, the court has nothing to do with the decision.

The government’s new-found love for liberty has also not been above board. After stoutly defending the seditions law in the court, it suddenly struck a conciliatory note, sensing the mood in the court and promising to do a review, pending a final decision on the issue. It had also agreed that until that is done, the existing cases need to be held in abeyance, as the court had itself suggested. But it was an about-turn when the government replied to the court’s queries. But obviously, the court has not fallen for the make-belief exercise. (IPA Service)