South Asia Should Be Made Into A Nuclear Weapons Free Zone 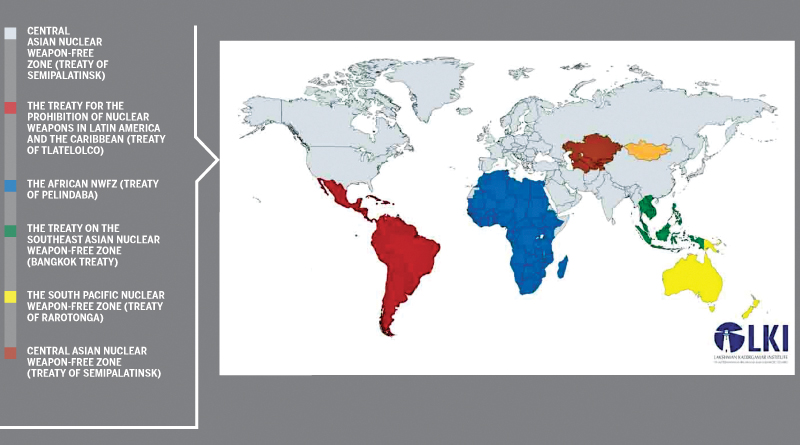 In 1998 that is 24 years back on 11th May India carried out first nuclear weapon test under the Vajpayee government. The event was celebrated with fanfare; public was jubilant over that India has now become a power to reckon with. Those who termed the event as a step towards mutually assured destruction were ridiculed. But just after 17 days on 28th May Pakistan too did the same. Observers felt that Pakistan has become at par with India in nuclear weapons race. Mood of the supporters of nuclear weapons in the country got subdued. Some experts argued that India who had superiority over Pakistan in conventional warfare has lost that since both countries have become nuclear armed. Exact figure unknown but there are estimates that both have 100 plus nuclear weapons each.

The nuclear lobby argued that these weapons will serve as deterrent to war between the two countries who have been having perpetual tension since long. This hypothesis however was proved wrong as in about a year there was war between India and Pakistan at Kargil front in 1999.  Terrorism from across the border continues unabated. There was terrorist attack on the Indian Parliament after which armies of the two countries were face to face on high alert with fear of use of nuclear weapons looming large. Possession of nuclear weapons has not deterred standoff between India and China either. There were skirmishes between the two at Galwan in June 2020. Now the nuclear lobby is actively propagating that if Ukraine had nuclear weapons, Russia would have not attacked.

South Asia comprises of eight nations: India, Pakistan, Bhutan, Nepal, Bangladesh, Afghanistan and the island nations Sri Lanka and the Maldives. Although South Asia occupies only 3.4% of the world’s land area, the region is home to approximately 24% of the world’s population, making it the most densely populated place on earth. Despite being rich in natural resources, it is among the poorest regions of the world in terms of per capita income, with 40% of the world’s poor living here. Still countries of the region especially India and Pakistan spend lot on arms race.  Expenditure on nuclear weapons adds to their defence budget. As a result the countries of the region are left with little to spend on health, education and development.

Arms race in the region on the rise. With the ambition to become arms exporter India has already signed a $375 million agreement with Philippines to supply supersonic shore-based anti-ship BrahMos missile system with a range of 290 km developed jointly with Russia. Reports are that more such agreements are likely to be signed with Vietnam and Indonesia. With China acquiring advanced weapons system India has the excuse to manufacture and export arms. After China made its first nuclear bomb in 1964, there was lot of pressure on India to build nuclear weapons.

There is need to reverse this situation through mutual dialogue and confidence building among the nations. Civil society can play a big role in highlighting the humanitarian impact of nuclear weapons and build public opinion in India and Pakistan to join the Treaty Prohibiting Nuclear Weapons and for diversion of funds from arms race to development.

The peace movements have multifaceted tasks ahead. They have to build strong public opinion for disarmament. Medical peace activists have to explain how the arms race is affecting our health adversely. The message of the study by Dr. Ira Helfand, Co-President IPPNW on climatic consequences of limited nuclear war using 100 Hiroshima sized atomic bombs between India and Pakistan, which would put over two billion people at risk, has to be taken down to the masses as well as the decision makers.

Steps need to be taken for a lasting peace and nuclear disarmament in the region. Structural drivers for war have to be identified and peace activities have to be designed accordingly. India has been the harbinger of the non-aligned movement, which was initiated by the first Prime Minister Jawahar Lal Nehru along with Marshal Tito of Yugoslavia and Gamal Abdel Nasser of Egypt. The basic thrust of this movement has been non alignment from any blocks, based on the principle of respect to sovereignty and integrity of other nations. India also proposed the Rajiv Gandhi action plan for nuclear disarmament in 1988.

However given the aggressive nationalism and macho approach towards militarization, the task of peace making has become all the more difficult. India and Pakistan have not been receptive to the idea of nuclear disarmament. The ministers of the present government at the centre did not have the courtesy to meet with a delegation from IPPNW, a Nobel Laureate organization, in March 2018 at the time of an international seminar on the TPNW in New Delhi. Previously, all ministers, including the President and the Prime Minister, had shown a willingness to engage with such delegations.

Chairman of an NGO, Blue Banner, Dr. J. Enkhsaikhan of Mongolia is quite vocal on the necessity of Nuclear-weapon-free zones (NWFZs). According to him these are recognized as important and practical regional measures of non-nuclear-weapon states (NNWSs) in promoting the goals of nuclear non-proliferation and strengthening confidence among states. Whereas the concept covers the regional areas but Mongolia set an example by declaring its territory as a single state Nuclear Weapons Free Zone in 1992.

It is imperative for the non-nuclear states in the south Asian region to build pressure on India and Pakistan to abolish their nuclear weapons and make the region NWFZ. With a long history of non-alignment and with people of India and Pakistan having same cultural values and language, even relations they will be overwhelmed with the idea. Peace activists and organisations have to carry it forward and initiate a dialogue on the issue. This appears to be a task difficult but not impossible. Humanitarian benefits for this would be manifold. It is well known now that nuclear weapons could not save us from Pandemic. They have utterly failed to even alleviate poverty and hunger so much rampant in our region. Even if India and Pakistan are unwilling, other non-nuclear weapons countries of the region can declare south Asia as NWFZ and put pressure on the two countries. (IPA Service)

The writer is Co-President, IPPNW.

Rabindranath Tagore Spoke Strongly Against Sedition Law In 1897 On The Eve Of Tilak’s Arrest
Posting....