Rising Prices And Inflation In India To Remain Above Tolerance Level 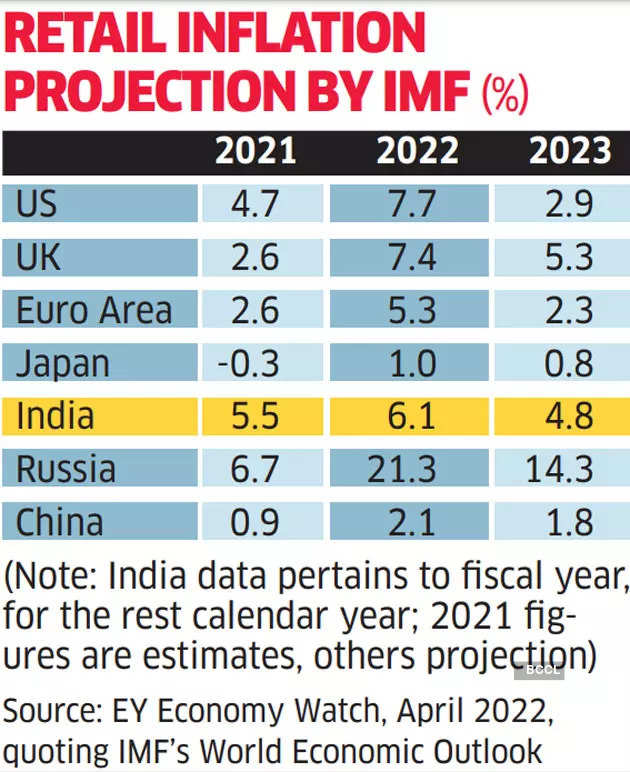 Rising prices and inflation in India are likely to remain above tolerance level of 6 per cent as visualized by the Union Ministry of Finance and the Reserve Bank of India (RBI). Retail inflation is expected to be much over this level in the medium term despite small moderation in domestic in May 2022, while the pass-through of rising input costs will keep the core inflation somewhat sticky on the one hand, and even push up the retail inflation on the other. A prospect of costlier imports and bad local weather conditions keeps both the Union Government and the RBI at tenterhooks.

An internal assessment of the department of Economic Affairs, Union Ministry of Finance, finds both the external and internal components which have been responsible for the high retail inflation in India during the last six months, to continue in near future. The external components included the higher cost of importing crude oil and edible oil prices while the internal components included higher prices of food articles and vegetables. Even the RBI’s inflation projections state that inflation in Q1, Q2, Q3, and Q4 of FY 2022-23 is expected to be 7.5 per cent, 7.4 per cent, 6.2 per cent, and 5.8 per cent.

Though the retail inflation in India moderated from 7.8 per cent in April 2022 to 7.0 per cent in May 2022, lower than many advanced and emerging market economies, yet it has been much above the tolerance limit of 6 per cent for five successive months causing the RBI’s monetary policy to drop its accommodative stance and Union Government’s fiscal policy to cut indirect taxes and administered prices.

Inflation forecasts made by various international and national institutions have also brought worries to the officials responsible for tackling the price rise and inflation. As the Russian-Ukraine conflict broke out in late February 2022 resulting in escalation of global commodities prices, the IMF in its World Economic Outlook of April 2022 revised its inflation projections for 2022 in advanced economies from 3.9 per cent to 5.9 per cent and in emerging market economies from 5.7 per cent to 8.7 per cent. Expectedly, global inflation rose in the months of April and May 2022 pushed up by the geopolitical tension and economic recovery and the lagged effects of accommodative monetary and fiscal policies around the world. India’s worry is linked to import of inflation in respect to high prices of crude oil imports that is likely to impact the entire consumption basket.

In the last six months the major causes of high retail inflation in India were elevated global prices of crude and edible oil on the one hand, and the onset of summer heat waves that have led to a rise in food articles and vegetable prices on the other. Retail food inflation has been higher than non-food, and it was attributed chiefly to retail vegetable inflation, with a weight of 6 per cent in CPI basket that increased to 18.26 per cent in May 2022. As summer heat waves gradually makes way for the south-west monsoons sending newer crops at the Mandi, the concerned officials in the Ministry of Finance expect the food prices and consequently headline retail inflation to decline.

The subcategory of ‘oils and fats’ is yet another significant contributor to food inflation. Since India imports about 60 per cent of its edible oil needs, domestic prices of edible oils are vulnerable to changes and volatility in global edible oil prices. The vulnerability showed up in March 2022 when the inflation in ‘oils and fats’ stood at 18.7 per cent, as global edible oil prices rose following a breakdown in the production and supply chains of sunflower oil in the Black Sea region, which also caused the prices of alternatives such as soyabean oil and palm oil to sharply increase.

In April 2022, inflation in “oils and fats” slightly declined to 17.3 per cent and moderated further to 13.3 per cent in May 2022 as Indonesia withdrew an export ban on crude palm oil and refined palm oil exports. Additionally, the Indonesian government has stated that it will bring down the combined export taxes to USD 488 / tonne from USD 575 / tonne to encourage shipments. India expects this measure to further ease edible oil prices in the global and domestic markets.

The non-food inflation has been mainly fuelled by sharp volatility and uptick in global crude oil prices. The average price of dated Brent crude rose from USD 105.8 / barrel in April 2022 to USD 112.4 / barrel in May 2022, as the Chinese cities of Shanghai and Beijing eased Covid-19 norms and international markets priced in the European Union’s plans to cut its Russian oil consumption by 90 per cent by the end of 2022.

Consequently, the average price of the Indian crude basket increased from USD 103 / barrel in April 2022 to USD 109.3 / barrel in May 2022. Since India imports about 80 per cent of its crude oil needs, the increase in global crude oil prices have translated into a higher cost of imports widening the country’s trade deficit.

International crude prices may be tempered in the medium run as global growth prospects weaken and the Organisation of Petroleum Exporting Countries (OPEC) increases supply. However, on the other hand, global crude supply may tighten as western nations wean themselves off Russian energy. Whether the price of India’s crude basket stays elevated in the next six months also depends on how successful India is in sourcing crude oil imports from countries willing to sell crude at lower prices.

Besides costlier imports and local weather conditions, the eventual pass-through of input cost from wholesalers/ manufacturers to retailers may also keep retail inflation high. The possibility has emerged since March 2021 when WPI inflation started to rise more rapidly than CPI inflation as wholesalers/ manufacturers absorbed the rising input costs to keep prices for final consumers low thereby helping in economic recovery. Now that a large gap between the two has emerged and wholesalers are disinclined to book further losses, the pass-through of input cost may commence leading to a rise in retail inflation. The pass-through may have already commenced as core inflation (non-food, non-fuel) continued to remain sticky at 7.1 per cent in April 2022 and 5.9 per cent in May 2022. (IPA Service)