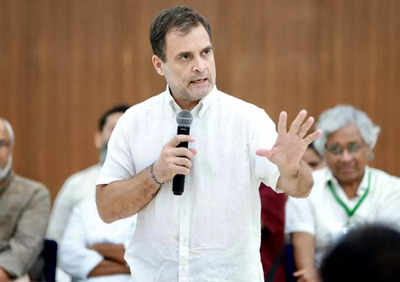 The prime minister on Saturday said Khadi can become a source of inspiration for achieving the dream of a developed and Atmanirbhar Bharat.

Attacking the prime minister, Gandhi said, ”’Khadi for Nation’ but Chinese Polyester for National flag! As always, the words and actions of the PM never match.”

The Congress has strongly criticised the Centre for amending the flag code to state that the national flag shall be made of hand spun and hand woven or machine made, cotton/ polyester/ wool/ silk khadi bunting.

Earlier machine made and polyester flags were not allowed to be used. Speaking during ’Khadi Utsav’ (Khadi festival) on Sabarmati Riverfront in Ahmedabad, Modi had on Saturday said once a symbol of self-respect, Khadi or the homespun was treated as an inferior product after Independence.

He urged people to gift the products of only Khadi village industries during the coming festive season.

Gehlot suspense over his ‘attachment’ to Rajasthan