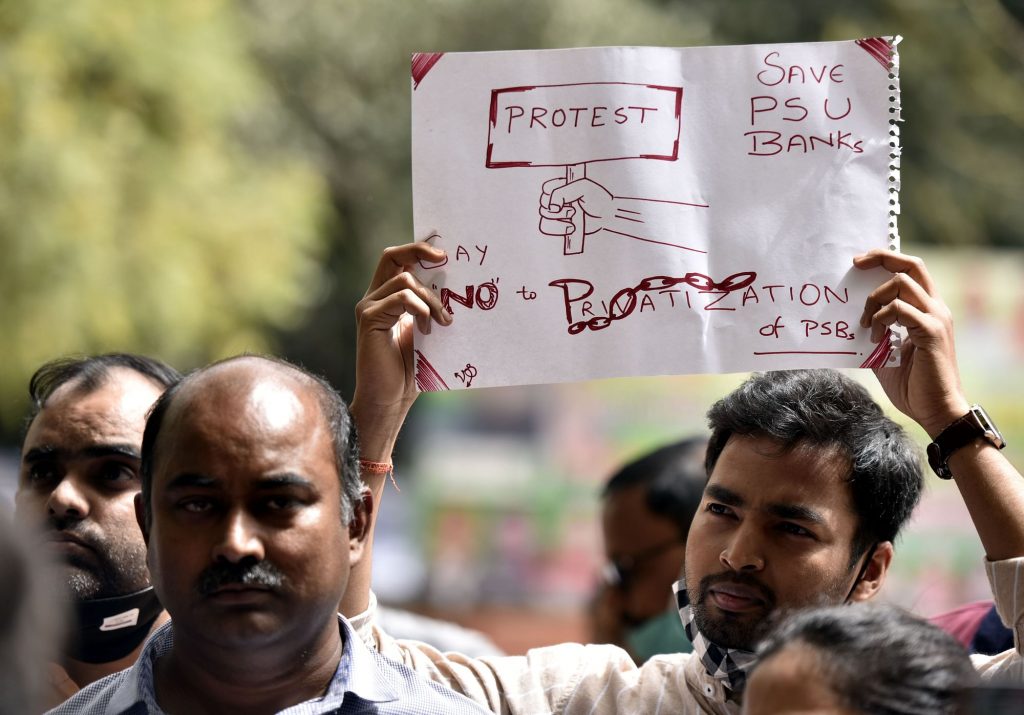 July 19 became a historical date for banking sector in India in 1969 when Congress led by PM Indira Gandhi nationalized the private banks in the country. Fifty three years later, on July 19, 2022, the Congress had to oppose PM Modi led BJP government who is hell bent on privatising the nationalized bank, only to cover their failure in managing them successfully in the last eight years of their rule precipitating the banking crisis.

During the last eight years, Modi government de facto handed over the nationalized banks to facilitate big borrowers who are chiefly to blame for Non-performing Loans (NPLs) because many of them are not returning the loan amounts and the government is helpless. This facilitation for the big was resorted to at the cost of honest small borrowers. Consequently, a very large amount of banking assets became non-performing commonly known as Non-performing Assets (NPAs). Non-performing, ill-performing, or evil doing nexus of bank officials, politicians, and borrowing big corporates brought the unprecedented level of banking crisis that the country is facing now. However, the Modi government and its Ministry of Finance led by Nirmala Sitharaman thought the entire crisis is the result of “ownership of government” and to save their skins for the mismanagement they want to transfer the banks in private hands which they call “saving the banks” and “saving the country”.

On the other hand the Congress has accused the Modi government of being on a “privatisation spree” and threatened to oppose the “bank sale bill” of the Union government. The Congress leader Jairam Ramesh said that the nationalization of banks 53 years ago was a transformational change. … Public Sector Banks must be equipped for face competition, but selling them off to a chosen few will be disastrous!” Even the All-India Bank Officers’ Confederation (AIBOC) has expressed their apprehension that the Modi government’s move to privatise PSBs is extremely dangerous since it would result in job losses, branch closures, and financial exclusion of the needy.

Who are the “chosen few” to whom the nationalized banks are to be sold will be known in the future. However, it has again put on record by non less than the Union Finance Minister Nirmala Sitharaman on the eve of completion of the 53 years of bank nationalization in the parliament of India on July 18 that the government is committed to privatise state-run banks.

The Government has introduced New Public Sector Enterprise (PSE) Policy for Aatmanirbhar Bharat which has been notified on February 4, 2021 and is applicable to Central Public Sector Enterprises (CPSEs), Public Sector Banks (PSBs) and Public Sector Insurance Companies (PSICs). Under this policy, PSEs have been broadly classified as Strategic and Non-strategic Sectors. In the Union Budget 2020, Sitharaman had first informed the country that the government planned to privatise two PSBs and several other PSEs, which the government loves to call disinvestment. Detailed guideline came in December 2021.

Modi government is desperate to sell them off to ease its own fiscal crisis, chiefly its own making through policy experiment after deserting the time tested paths. It was like rash driving the car that met accidents one after the other on the risky road full off potholes. Driver’s blaming the road does not prove him skillful.

Though Modi and associates time and again in the habit of flogging the dead horse, one cannot forget the benefits that nationalization of banks has brought to the overall development of the country and its people through providing them easy access to finance.

In 1969, the government took over the ownership and management of private commercial banks in India because they were indulged in the activities which were found hampering the economic development of the country. Economic concentration of power was in the hands of a selected few and they were using the public resources as per their whims and fancy, supporting their favourites and excluding others. There was no question of social and economic justice and banks were functioning on sole motive of profiteering. It resulted into very low level of usage of natural and human resources for the development of the nation. Additionally, common people did not have confidence in banking system of the country and mobilizing national saving was very difficult. Even more difficult was channelizing them into productive and economic justice sectors. One of the objectives of the nationalization said that it was intended to prevent the use of bank funds for anti-social activities.

It is therefore clear that the move of privatisation of the PSBs would defeat the very purpose of financial inclusion of all. Sole motive of the private sector banks would be profiteering. They would like to give loans to their favourite industries or business for more profit. One cannot deny their special favour to certain persons or institutions and disregard to others. Their credit facilities cannot be impartial because will be driven by profit making objective. Sectoral and regional disparities in providing financial access will harm the cause of economic justice.

As for inefficient management of public sector banks, private ownership is no guarantee of competent management. We have already seen it in several private sector banks or other institutions. Many of the private sector companies have gone bankrupt not only in India but world over. Public money will not be safe in private hand with their monopoly, which would lead to lopsided development of the country as a whole. Even during the pandemic we have seen how the public sector protected the country, even the private sector small companies and majority of corporates. Private sector neither has capacity to save themselves nor the people during crisis, as we have been witnessing for last two and half year of the pandemic.

Privatisation of PSBs would increase the cost of borrowing and investment, which would further create sectoral imbalance along with the output costs which would impact the common people. Social, financial, and economic justice for people from all sector of activities are bound to suffer partiality in private hands due to their mindset of pursuing profitability. Sectors with lower profitability would face more difficulty in accessing finance even if these may be important for the society of survival of individuals.

Risk of financial exclusion based on individual, sectoral, or regional factors will be very high. There is also a high risk of the private entities playing their game for financial dominance in the country, which will ultimately undo the gains that we have been entertaining through the nationalization of Banks in India.

Public savings must remains in public, not in private hands. We have enough experience of collapse of many private banks in the past, and people losing their savings. People need financial justice that private sector bank cannot provide. (IPA Service)

By Arun Srivastava   Sceptical of the political consequences of its open attack on Nitish Kumar just ahead of the 2024 Lok Sabha elections, the...

By K R Sudhaman   Finance Minister Nirmala Sitharaman is confident that Indian economy is in a comfort zone to weather the storm witnessed in...