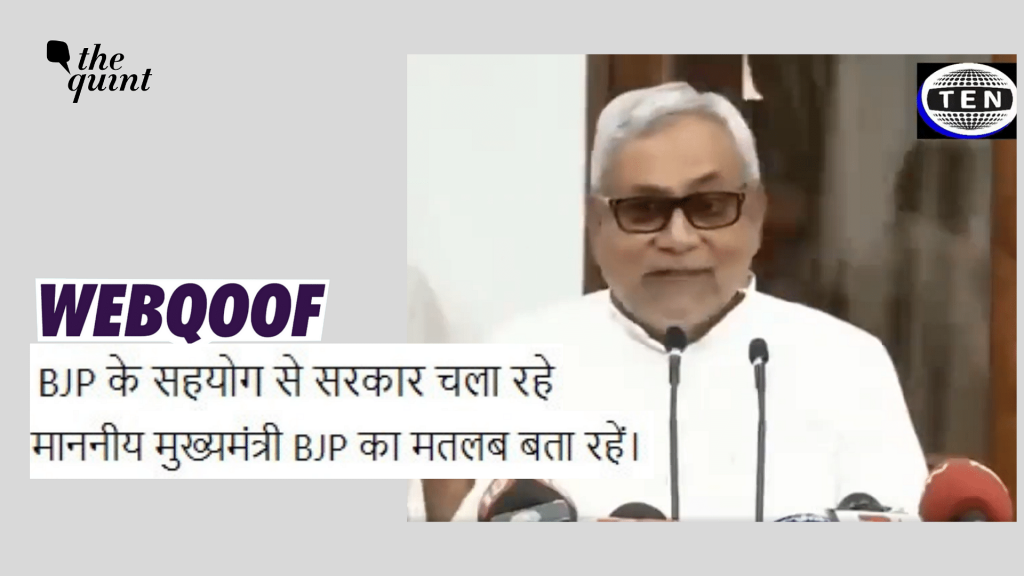 Sceptical of the political consequences of its open attack on Nitish Kumar just ahead of the 2024 Lok Sabha elections, the BJP duo Narendra Modi and Amit Shah have preferred to launch a proxy war through R C P Singh an ex union minister in Modi cabinet and former closest aide of  Bihar Chief Minister Nitish Kumar.

Nitish had turned unfriendly towards RCP for his demeanour to accept the offer of a ministerial berth by Modi, a year back, even after Nitish’s advice to him to follow the JD(U) policy decision not to accept any ministerial berth in Modi cabinet. From that day the BJP leadership has been trying to project him as the most influential and popular leader of Bihar who was more competent than Nitish.

While BJP continued to promote anti Nitish leaders of JD(U), the BJP  continued to maintain publically the façade of accepting Nitish as the only leader of the  NDA in Bihar. Paradoxically while the state level BJP leaders refrained from speaking against Nitish, the party did not object to its cadres and activists hitting the streets and decry him.

Interestingly coinciding with its two-day national conclave of the 8 frontal organisations in Patna, only a fortnight back, the state leaders at their meeting reaffirmed their trust in Nitish and said that NDA will go to Lok Sabha polls in 2024 and face assembly elections in 2025 under Nitish. Strange enough while their open pledge was for public consumption, they were covertly initiating the process to pull down Nitish from power.

Amit Shah’s assertion that no other party can match BJP’s organisational strength and growth and it would contest the 2024 Lok Sabha and 2025 Assembly elections in Bihar with its allies “under the leadership of PM Narendra Modi” makes it intentions abundantly clear. Speaking on the occasion, the national president J P Nadda had referred to the BJP as a “national party with regional aspirations” and that no other party was anywhere close to the BJP in terms of organisational strength and growth.

Refusal of Nitish to re-nominate RCP Singh to the Rajya Sabha after he relinquished the office of minister on expiry of his membership had sent the clear message that daggers have been drawn and Nitish and Modi have entered into an unsparing and merciless war. An insight into the political developments in Bihar and Nitish’s frequent visit to his home town Nalanda after RCP had to leave the Modi cabinet, would make it explicit that Nitish was aware of the machinations of Modi and Shah.

RCP too incidentally hails from Nalanda and belongs to Koiri caste, a backward caste, which has a sizeable population there. Nitish’s frequent visits to the district was a damage control measure. He did not intend to allow any space to RCP to manoeuvre against him. The legislators who attended internal sessions of the two-day meet said the party did discuss the “indispensability of Nitish Kumar in the NDA alliance”. BJP also talked about “mutual trust and respect” between the two alliance partners. The meeting also lamented that the BJP had miserably failed to find a leader in the state to match Nitish’s stature. No leader worth name and credibility commanded the trust of the backward caste kurmis and koiris. The move of the BJP was to project RCP as the alternate to Nitish.

After Kumar clogging all the possible routes for RCP, he was left with no other alternative but to launch a bitter personal attack on Nitish on Saturday.  RCP resigned on Saturday from the Janata Dal (United) after it sought an explanation from him over the allegation that he amassed “huge property” in the name of his family members between 2013 and 2022. The party has asked him to “respond point-wise” to the charges that he purchased as many as 58 plots in the name of his wife and two daughters.

Now was the time to come out of the closet and launch a vitriolic against Nitish. Opening his tirade he said “Nitish can never become prime minister. JD(U) is a sinking ship.” Retorting to te allegation of purchasing land in the name of his wife and daughters, Singh levelled allegation that Nitish too has a large number of plots. “I have all the documents of the plots purchased and all these are mentioned in the income tax returns filed by my daughters and wife. There is nothing wrong and no there was no corruption at all. Let it be probed by any agency,” Mr. Singh said. “The way they (some party leaders) have stooped so low to target me is shocking but I have accepted the challenge.”

The entire show appears to be of the nature of soap opera squabble, which utterly lacks any concrete political backdrop. Nevertheless people and politicians are expecting more revelations from RCP. Since he has been privy to   Nitish’s activities and dealing for over 25 years, it is expected that he is in possession of some of the dirty information   about CM. It is also alleged that RCP purchased the plots in the Islampur and Asthawan blocks of Nalanda. He had 20 plots purchased in the name of his daughters and 38 in the name of his wife. It is expected that the political war will also explode the dark side of the corrupt practices gripping the political circle of the state., especially theJ D(U) leaders.

Since Nitish is known for resorting to cold blooded political action, the political circle is not sure of his future political moves. Nitish would not give even a glimpse of what exactly goes on in his mind. At the time he walked to the residence of former CM Rabri Devi’s residence to attend an Iftar party hosted by the RJD, the political circle could not make out the hidden agenda behind his move. He had in reality has started exploring his alternate moves. The sources maintain that in the prevailing situation Nitish would not prefer to continue his  relationship with the BJP. His aides confide that he may be taken for ride any day by the BJP.

Sources also maintain that RJD chief Lalu Yadav is of the opinion that in order to keep away BJP from power, Nitish could be given an opportunity to continue as the chief minister. RJD is awaiting for the signal from Nitish.  In fact RJD is not in the mood to put a condition that he would have to accept Tejashwai Yadav as the chief minister. It is also said that Nitish has been using backroom mechanism to dispel the misunderstanding with the Congress leadership. Even some of the opposition leaders are not reluctant to make him the convenor of the UPA.  This according to them help the opposition to attract the OBC voters in UP, Bihar and MP.

Nitish has already initiated the move to distance JD(U) from the BJP.  He along with other senior JD(U) leaders nurses the feeling that BJP BJP could use RCP to divide the JDU and shift its backward caste vote bank. Only a couple of days back the party announced that it would not become a part of Modi’s cabinet since the BJP leadership has conspired to diminish the stature of chief minister Nitish Kumar by projecting RCP.

The intensity of the crisis could be gauged from the fact that Nitish has convened an urgent meeting of his legislators and 17 MPs in Patna to assess the situation in the wake of former Union steel minister R.C.P. The move comes after Nitish announcing that his party will not join the Union council of ministers. Earlier, Kumar had skipped the NITI Aayog meeting held on Sunday. Singh quitting the party and initiating the process of vilification campaign against him. He is apprehensive of BJP design to bribe the MPs and offer them ministerial berths.

The JDU national president Lalan Singh, alleged that a fresh conspiracy has been hatched again.  In 2020 the BJP had used Chirag Paswan son of Ram Vilas Paswan’s son to divide the dalit and OBC votes. Lalan said “Once again a similar model is being prepared. We are now alert about it. Don’t ask me now about who conspired when, where and how. We know everything and will tell about it at an appropriate time”.(IPA Service)