Nitish Dismisses Buzz About His Candidature For President 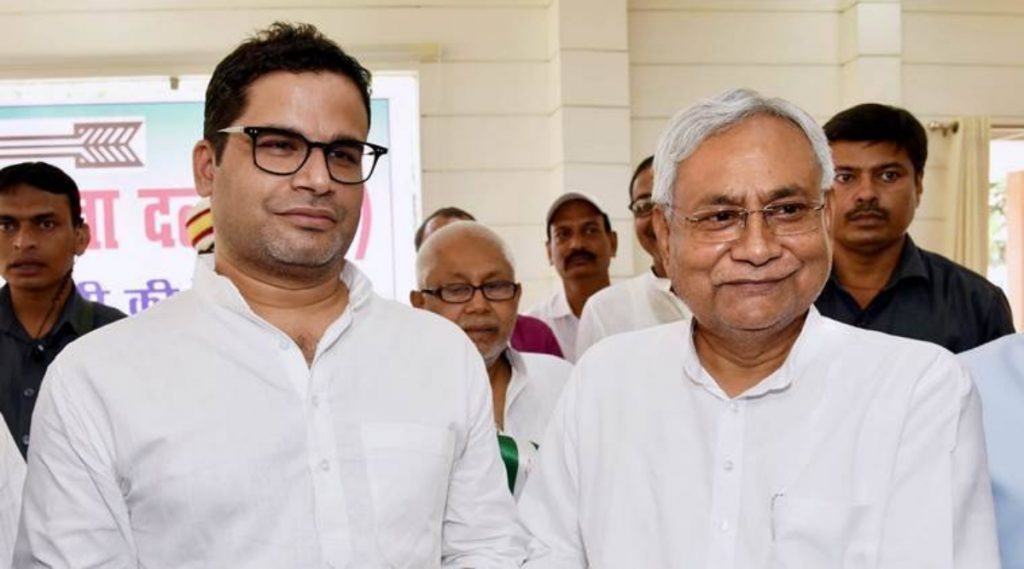 Amid a lot of buzz for the coming presidential elections, names of political veterans such as Sharad Pawar, BSP Supremo Mayawati and a few others have been doing the rounds and discussed as possible candidates for the post. Speculations have been rife of late with Bihar chief minister and long-time BJP ally Nitish Kumar also being talked about as a leading contender. However, Kumar has categorically dismissed the buzz, his cabinet colleague Shrawan Kumar stated: “It is natural that such discussions about Nitish Kumar should be held. He is suitable for any post — be it chief minister, prime minister or even President.” Reportedly, the rumours about Nitish being nominated for the presidency originated following his two hour-long closed-door meeting in Delhi recently with poll strategist Prashant Kishor who is believed to be in touch with various opposition leaders like Uddhav Thackeray, Sharad Pawar, K Chandrasekhar Rao, M K Stalin and Mamata Banerjee. However, both Nitish and Kishor had said that no politics was discussed. All eyes are on the results of the assembly polls in five states ahead of the presidential poll, which will test the relative strength of the anti-BJP opposition. According to Congress sources, UPA may likely to propose the name of NCP Chief Sharad Pawar as a presidential candidate in a move to pre-empt the BJP and particularly Narendra Modi, who is expected to come up with an out of box candidate for the same.

West Bengal chief minister Mamata Banerjee faced protest upon her arrival in Varanasi by members of Hindu Yuva Vahini, who raised  loud chants of Jai Shri Ram and showed her black flags, while shouting slogans like “Mamata Banerjee go back.” The incident took place on Wednesday, March 2 in the evening when Banerjee had arrived in Varanasi to address an election rally alongside Akhilesh Yadav to campaign for the candidates of the Samajwadi Party ahead of the seventh phase of voting in the ongoing assembly elections of Uttar Pradesh. Describing herself as a fighter at the rally in Varanasi, Banerjee on Thursday said:  “I have been attacked several times, shot at and beaten by sticks in past, but never bowed down… I am not coward, I am fighter. Attack on me by BJP workers when I arrived in Varanasi indicates they are going out of power,” the Trinamool chief said at the Samajwadi Party rally.

With the declaration of results of assembly elections in five states on 10 March, Rajasthan Chief Minister Ashok Gehlot and Chhattisgarh Chief Minister Bhupesh Baghel met party MP Rahul Gandhi and AICC general secretary Priyanka Gandhi Vadra to discuss the party’s electoral performance, post-poll strategies and discussed the schedule of organisational elections that will culminate in the election of a new party president by September-October this year. The tussle between the two states over supply of coal by Chhattisgarh to Rajasthan was also discussed. Gehlot has already written two letters to Congress president Sonia Gandhi, seeking her intervention to persuade Chhattisgarh to speed up clearances for mining coal for power plants. Baghel is learnt to have apprised Rahul about protests by people from tribal communities who may face displacement and concerns regarding the environmental impact. The leaders also discussed the post-poll strategy. The Congress hopes it will emerge in front in at least three states — Uttarakhand, Goa and Punjab. The CMs could be rushed to the states for government formation efforts if the party finishes at a striking distance from the halfway mark.

MINISTERS DEPLOYED TO PLACATE ANGRY STUDENTS BACK FROM UKRAINE

Under fire over the issue of students stranded in Ukraine, the Union government has asked ministers to receive those returning in the flights under Operation Ganga Mission. Women and Child Development Minister Smriti Irani was seen hugging the girls and cheering them up. Jal Shakti Minister Gajendra Shekhawat went inside the aircraft and interacted with the evacuees, asking them if they needed more assistance. MoS in the PMO Jitendra Singh have roses to those who landed from Ukraine at the IGI Airport in Delhi. While BJP MP Varun Gandhi appeared to be questioning the government’s efforts regarding evacuating students from conflict-torn Ukraine as he claimed that thousands of students were stuck because decisions were not taken at the right time.

Varun Gandhi seems not to be in consonance with the thoughts and stand of BJP and has closed all options of rapprochement with the party. He has taken on the mantle of a rebel and chosen to be a dissenter. Varun has been criticizing the policies of the central government.  Varun, who is a BJP MP from Pilibhit Lok Sabha constituency in Uttar Pradesh, rejected his party’s pitch to make it an 80% versus 20% election and said the state will not vote on Hindu-Muslim issue. Meanwhile, he has also desisted from campaigning for the party. The BJP leadership is yet to take any action against him. So where could Varun Gandhi be headed now that his association with the BJP seems to be over? Will he join the Congress or embrace some other political party? He could also choose to continue with the BJP. Much depends on the outcome of the UP assembly elections. (IPA Service)