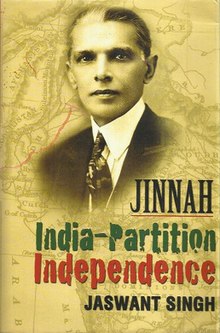 Mohammed Ali Jinnah, who is now being eulogized by some of the Indian politicians particularly during the elections, did not care for Muslims staying back in India and was willing to sacrifice them to ensure the well-being of those who opted for Pakistan. In an interview Ishtiaq Ahmed, professor emeritus of political science at Stockholm University has said Jinnah also did not want a mere partition of India but also dismembering and balkanisation of India into Dravidastan in South India and separate state for Sikhs.

Jinnah, a pork eating Muslim, believed in two-nation theory and division of India on the basis of religion. Though an irreligious Muslim, Jinnah was communal unlike Mahatma Gandhi, a very religious and secular leader, who wanted the country not to be partitioned. Gandhi also believed in United India with cultural, regional and religious diversity.

A former visiting professor of Lahore Government College and a columnist, Ishtiaq Khan provides a wealth of evidence in his recent book to debunk Jinnah’s bargaining chip theory, first popularized by Cambridge and Harvard scholar Ayesha Jalal and thereafter by many others including BJP’s former External Affairs Minister and Finance Minister late Jaswant Singh. Former Deputy Prime Minister L K Advani of BJP too had talked about Jinnah’s secular credentials. Advani received a flak from RSS as a result.

Ishtiaq Khan said “Jinnah never, even once showed any interest in a united India and in a power sharing deal with Hindus and Muslims as equal nations sharing power at the centre. Jalal omits all those speeches, statements and messages where ad infinitum he (Jinnah) reiterates that the Lahore resolution means the division of India into Hindustan and Pakistan,” Khan says quoting evidences to this effect in his book.

Khan said “we cannot come to any other conclusion” that Jinnah believed in not only partition of India but also  with more radical thought of balkanization and dismembering India and supported separate country of Dravidastan in South India and separate state for Sikhs. Isthiaq Khan elaborates on what he had written on this subject in his book in an interview to Karan Thapar of the Wire. Khan went on to say  that of the 565 princely states in India, Jinnah not only tried to woo Muslim princely states like Junnagarh but also tried to encourage some of the Hindu princely states to join Pakistan. Jinnah had asked Nizam of Hyderabad to be prepared to sacrifice. There could be no other conclusion one could draw other than that Jinnah was clearly for dismembering India while creating Pakistan with as much area as possible.

He also disagreed with the view that Jinnah wanted a secular Pakistan.  His speech three days before formation of Pakistan where he talked of Secularism, was only a facade to minimize hardships and ensure that Muslims in India do not attempt to crossover to Pakistan. This would have meant more economic burden chaos in Pakistan. It was also meant to address international audience particularly United States, which considered formation of Pakistan as not a workable option at that point of time.

Khan was also emphatic in saying India and its leadership never tried to push Muslims to cross over to Pakistan unlike in Pakistan where Hindus were driven out. Also that speech of Jinnah where he talked of secular Pakistan was aimed at ensuring that 35 million Muslims who opted to remain in India were not pushed into Pakistan flooding the newly formed country with more problems. In fact, according to Khan, Jinnah was communal and never wanted creation of a secular Muslim nation like Turkey.  Jinnah had “antipathy” to words like Secular or democracy, Khan emphasized.

Jinnah though married to a Parsi did not believe in other faiths, Khan said adding “Hitler was a vegetarian but does it make him non-violent”.  Jinnah in fact converted his Parsi wife into Islam in a Sunni Mosque in Bombay before the marriage which was performed as per Shia rites. Jinnah was a Shia Muslim. The fact that a non-Muslim wife is converted is a “plus thing” from Islamic point of view. Jinnah was “rabidly communal” he alleged. There are enough evidences to suggest that Jinnah did not want a country that remained secular. So any reference of secularism in Jinnah’s speeches had limited agenda and were forgotten by him once the purpose is achieved.

Jinnah ensured liberal democracy did not take roots in Pakistan. Jinnah said different things without any conviction mainly to address different sections of the society to win over them. Imposition of Urdu, which was spoken by elite 3 per cent of Pakistan was imposed upon 55 per cent of population of Bengalis in East Pakistan, which culminated in the break-up of the country in 1971 as Bengalis did not speak or understand Urdu, Khan said. Barring the educated, majority of Punjabis and Sindhis, too were not conversant with Urdu at that time.

Ishtiaq Khan’s observations about Jinnah, detailed with documentation in the book is an eye opener to Indian politicians who often referred to Jinnah as a role model.  Jinnah never had any concern for common man and his sole aim was to dismember India unlike congress leaders, who envisaged an independent secular nation. (IPA Service)

Modi’s ‘Civilisationalism’ May Be Another Potential Flashpoint
Posting....