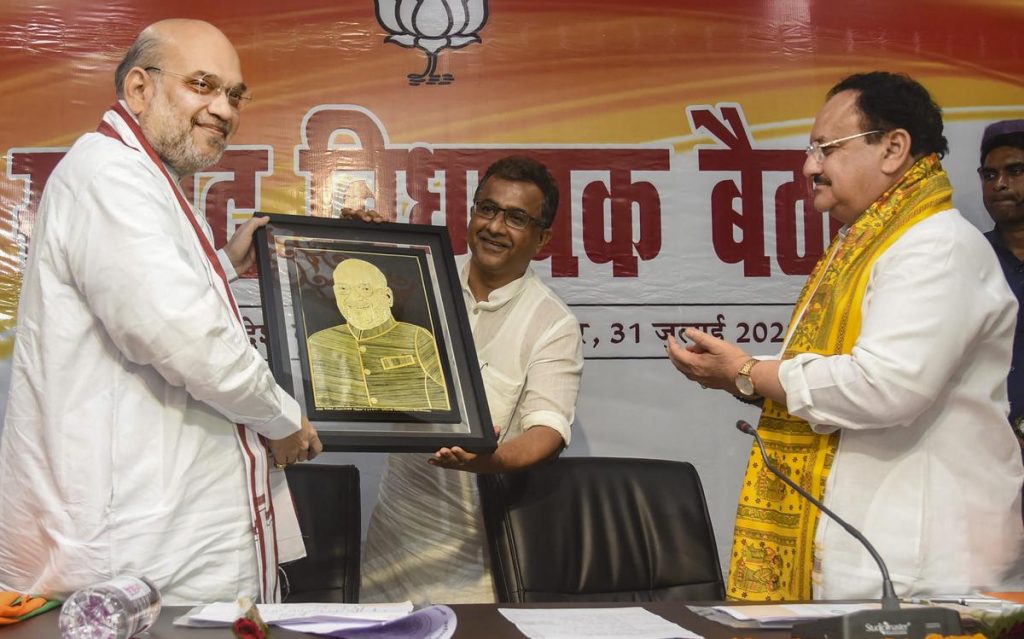 Prime Minister Narendra Modi’s words of caution to the natives of Gujarat; “stay alert and away from the “urban naxals” and foreign agents who were  creating roadblocks in development and pursuing a malicious agenda to wreck India,” may appear to be of local character, it echoes the view expressed by the RSS chief Mohan Bhagwat. Only some time back Bhagwat had said “Maoism has always been “urban” and the neo-Left doctrine of urban naxals is to establish an “anti-national” leadership with blind followers” He charged that ‘urban Maoism’ was propagating falsehood and spreading hatred in the society.

The week old remark of Modi simply reinforces the fear that with defeat in the Gujarat assembly elections staring at the face he has turned desperate to salvage the situation. His nervousness is manifest in his observation: “urban naxals are now flying into the state by sporting a new get up…..I was determined not to let Naxalism gain a foothold in Gujarat and that is why I started development of the entire eastern belt”. It was simply ludicrous to listen to the prime minister of India, who forgetting his national role was speaking like a local Gujarati leader. It was indeed shocking to hear from him that Naxals have wrecked the lives of tribal youths in West Bengal, Jharkhand, Bihar, Chhattisgarh, Odisha, AP, Telangana, Maharashtra and part of MP”. His speech was devoid of truth and was full of lies.

Recent developments have made it explicit that Modi and Amit Shah have chalked out a major offensive plan to turn the mood of the people and results of the assembly elections in their favour.  They can go to any extent to achieve their mission.  Modi’s warning affirms that he was contemplating to launch a repressive drive against the intellectuals, academics and social activists who have been consistently opposing his model of governance as it has been tyrannical and divisive in nature.

Already a group of intellectuals and academics are rotting in the jails of Maharashtra on the charges of being urban naxals. It is quite intriguing that while the Union government on the floor of the parliament conceded that it was not aware of any such term, Modi continues to use it. Strange enough Bhagwat went a step ahead saying that to establish an anti-national leadership with blind followers solely committed to them is the ‘neo-Left’ doctrine of these urban Naxals.

The Modi government had used the phrase “urban naxals” just before the 2019 Lok Sabha elections also. Modi is using this phrase ahead of 2024 general election. This is nothing but part of a deep design to silence critics. The Modi government intends to crack down on the vocal section of the society who dare to question him. Bhagwat has already said “their cohorts already established in social media, intellectual circles and other institutions are associated with such activities.” While the saffron is itself involved in spreading the hate feelings in the society and communalising it, Bhagwat accuses the urban naxals of “manufacturing  a vicious atmosphere that weakens the social cohesion – essentially the bedrock of internal security of a nation a world of psychological warfare is being carved out, he charged. “This is called as ‘Mantrayuddh’ in our traditional ‘rajneeti shastras'”.

Modi nonetheless promised to carry out development works in Gujarat, his harping on urban naxals points to unleash a reign of terror. Enforcement Directorate (ED) suddenly coming out of stupor and CBI becoming proactive just ahead of the assembly and 2024 Lok Sabha elections unravels Modi’s design. He has unleashed these agencies to terrorise the common people and  make them fall in line.  ED is the most feared agency.  It has carried out maximum number of raids but failed to substantiate its charges against the arrested persons. Their objective is quite simple. Arrest the person and put him in jail. This is enough to terrorise the dissenting voices.

ED on July 31 detained Shiv Sena leader Sanjay Raut in connection with a land scam case. It interrogated almost all his family members but so far has not succeeded in proving his charges against him. In Calcutta the senior minister Partha Chatterjee was arrested on the charge of hiding huge cash, nearly 60 crores. He was interrogated several times. He is still in jail. But the ED is yet to come out with a tenable charge.  It had served notices to former chief minister of Bihar, Rabri Devi, her son Tejashvi Yadav, the current deputy chief minister of Bihar. Yadav was so angry at the behaviour of the ED officials that he offered them premises to set up their office and carry on their   investigation. The latest name added to the longlist of ED is that of Manish Sisodia, Dy CM of Delhi.

ED filed more than 5,400 money laundering cases but it has secured conviction against just 23 persons till now. The ED’s conviction rate is as low as 0.5% even after the dramatic increase in raids. It probed 18,000 cases under FEMA in 6 years. In all, the central agency imposed penalty worth Rs 4,312 crore over these years. The government data shows it issued 27,000 summons, conducted 771 raids. After the amendment in 2015 with addition of section 37A in FEMA, ED can now attach properties in India if they find that any assets are held outside India in contravention of the rules. Though ED have no power to arrest under FEMA as in PMLA they indulge in this game with impunity. Only recently a journalist Rana Ayub was served notice under charge of money laundering.

True enough, the Modi government has been using the ED raids to dry the fund channels of his detractors. While he is reluctant to reveal the money BJP has received as fund, he is out to clog opposition sources. ED raids in the last six years have jumped nearly 27 times to 3,010 in 2022. It did not make it public the total quantum of money attached during the raids was returned once the person could not be convicted.

Another worrying trend for the CBI, as shown in the CVC annual report, pertains to pendency of its cases in courts. As of December 2019, a whopping 6,226 PC Act cases probed by the CBI were pending trial in various courts across the country, some for more than 20 years. When it comes to appeals and revisions filed by agency and accused persons in various high courts, Supreme Court and additional session courts are taken into account; a staggering 11,380 appeals/revisions are pending in courts, CVC data suggests. Like ED the CBI was also being used to goad and terrorise the opposition leaders, politicians and social activists. A retired senior CBI official said that the manner in which the ED and CBI have swung into action it sends the clear message that a number of the politicians and activists may be put behind bar before the 2024 Lok Sabha elections. (IPA Service)