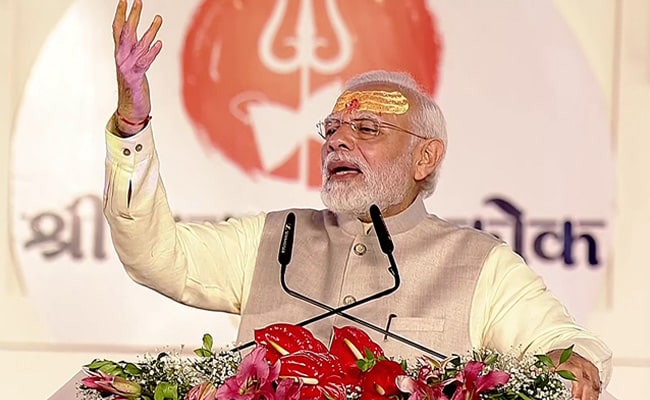 Prime Minister Narendra Modi on Tuesday said Ujjain has led India’s prosperity and knowledge for thousands of years and the new India is moving forward by reviving the tradition of science and research along with faith.

Speaking at a public function after performing puja at the Mahakaleshwar temple and inaugurating the first phase of the Rs 856 crore ‘Mahakal Lok’ corridor project, Modi said the project will add to Ujjain’s vibrancy.

He said the grandeur of ‘Mahakal Lok’ will give “cultural and spiritual consciousness” to the coming generations. Modi began his address by chanting “Har Har Madadev” and said, “under the aegis of Shankar, nothing is normal and everything is sublime, unforgettable and unbelievable in Ujjain”.

He said when new India is moving forward with its ancient values, it is also reviving the tradition of science and research along with faith.

“Spirituality is contained in every particle and divine energy is being transmitted in every corner of Ujjain,” the prime minister said, adding, Ujjain has led India’s prosperity, knowledge, dignity and literature for thousands of years.

“During the Azadi Ka AmritKaal, we broke the shackles of colonialism. Today, cultural destinations across India are seeing all-around development. For the first time, Char Dhams are being connected with all-weather roads,” Modi said, adding that Kartarpur Sahib is open for the first time after Independence.

“India has called for ‘Panch Pran’ like freedom from the mentality of slavery and pride in its heritage during Amrit Mahotsav. Therefore, the construction of the grand Shri Ram temple in Ayodhya is being carried out at full speed. Vishwanath Dham in Kashi has increased pride in India’s culture … The development works are setting new records in Somnath. New chapters of development are being written in Kedarnath and Badrinath with the blessings of Baba Kedar,” he said.

Before the event, Modi inaugurated the 900-metre-long Mahakal Lok corridor built at the Mahakaleshwar temple.

“The grandeur of Mahakal Lok is beyond the limits of time which will give cultural and spiritual consciousness to the coming generations,” he said.

Modi said Lord Shiva is indestructible and the city of Mahakal (Ujjain) is beyond calculations of periods.

“There is a resurrection even from the end in the presence of Mahakal. The journey of infinity begins from the end here,” the prime minister said.

He said that the centre of our faith is awakened so does the consciousness and spirit of India.

“Invaders like Iltutmish tried to destroy the energy of Ujjain, but our sages have said that even death cannot harm under the shelter of lord Mahakal. So India was revived from its centres of faith,” the prime minister said.

Modi said it is a memorable day as Shri Mahakal Lok is being inaugurated which will add to Ujjain’s vibrancy.

“Ujjain has led thousands of years of prosperity, knowledge, dignity, civilization and literature. The grandeur of India will give rise to new possibilities for the development of the whole world with the blessings of Mahakal,” he said.

The divinity of India will pave the way for peace for the whole world, he said.

“Places like Ujjain have been the top centres of research related to astronomy. When new India is moving forward with its ancient values, it is also reviving the tradition of science and research along with faith,” the prime minister said.