Kisan Garjana Rally May Be Precursor To BJP’s Decline 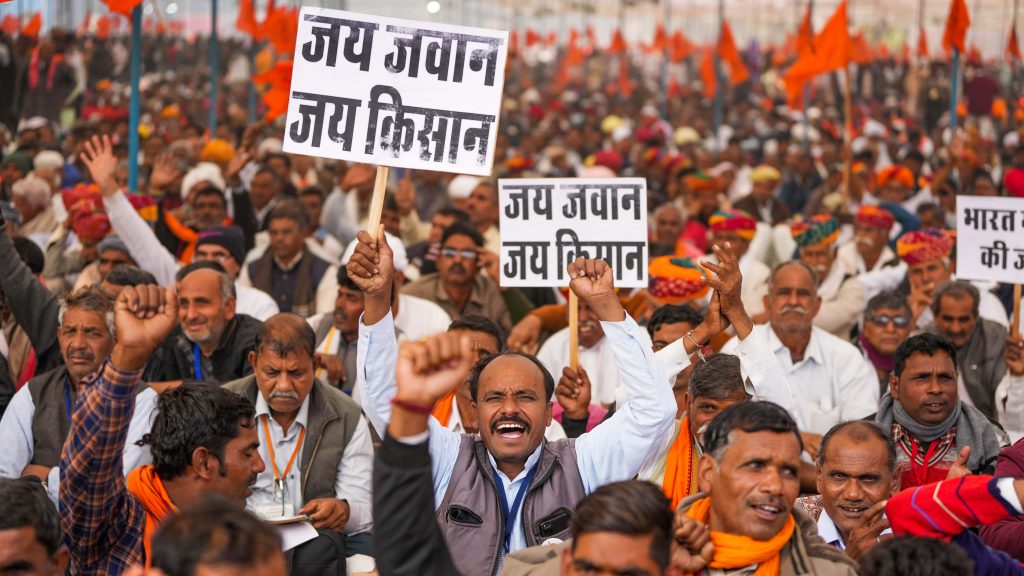 Kisan Garjana Rally organized in Delhi Ramleela ground on Monday by RSS-affiliated farmers’ body Bhartiya Kisan Sangh (BKS) against the ruling establishment led by Narendra Modi might have inflicted a chilling sensation into the Modi-Shah duo’s spines, for it reflected the despair and anger of farmers against them. Moreover, it may be a precursor not only for their own decline but also preparation for sacrificing their own government to keep their support base for larger interest of establishing a complete Hindu Rashtra.

Let us recall the call of RSS-affiliated Swadeshi Jagaran Manch (SJM) given about 20 years ago given for swadeshi as against globalization under premiership of Atal Behari Vajpayee riding on “India Shining” boat that capsized in the consequent general election of 2004. BJP was troubled from within and RSS could not help the ruling establishment because they preferred keeping their support base to the BJP rule. RSS does not play short term politics. Their politics span over hundreds of year for establishing a strong Hindu Rashtra and sacrificing one or two of its prime ministers or governments is immaterial.

BKS is the only one organization at present that the RSS has brought in the forefront obviously to tame the arrogance of the Modi-Shah duo that has been harming the larger interest of the RSS. It is just like it had brought SJM to tame Vajpayee-Pramod Mahajan duo’s highhandedness. RSS just hates its own leaders when they become bigger than their shoes and start believing RSS or BJP survives only because of them. Whenever it happens in the RSS family, the entire rank and file become non-cooperative, and the arrogant leaders suffer an ouster too humiliating for them.

By now Modi-Shah duo had antagonized many of the RSS leaders and karyakartas along with the numerous enthusiasts of the BJP by their arrogance under which they are not listening to any wise and sane suggestion but their whims. It has alienated large number of BJP supporters. It has cost BJP their power in MCD and Himachal Pradesh in the recent elections and clearing a little inroad into Gujarat for AAP is a clear signal. Modi’s charisma as such in on the wane, in absence of non-cooperation of the RSS cadre, is clear from the election results of MCD and Himachal Pradesh.

RSS has thus served a clear warning to Modi-Shah duo that they must change their ways to keep the support base intact for the larger interest of the RSS long term dream of a strong Hindu Rashtra rather than pursuing their own interests and the interests of their corporate friends.

Choosing BKS this time to serve this message is significant. Hindutva easily catches imagination of the Hindu Farmers, and RSS has a plan to penetrate into about four lakh villages of the country through their organisations before 2024 general election. It should be noted that there are about 6.25 lakh villages in the country and penetrating into 4 lakh villages completes its dream. They have already made their presence felt in these villages in the last three years. They had penetration in over 1 lakh villages by 2019, and during the lockdowns since 2020, the RSS karyakartas of these one lakh villages penetrated to 3 lakh villages through their relations and service work among villagers and farmers. The level of RSS penetration among villagers and farmers can also be imagined by the fact that people from 60 thousand village committees of 560 districts of the country out of 766 had come to participate in the Kisan Garjana Rally in Delhi. RSS is not in a position to forego such a huge base among farmers and villagers only to support Modi-Shah duo.

The demands of the BKS now, and the demands of the Samyukta Kisan Morcha (SKM) an apolitical organization that led a historic farmers struggle in the country since August 2020 after the passage of three controversial farm laws, are strikingly similar. SKM had refused all the offers and sticked to the demand of scarping of the three farm laws because they suspected that Modi government was trying to bring corporate to farm and the farmers would be reduced to merely farm labours.

SKM had given call to Dilli Chalo and the farmers were barricaded in three borders of Delhi, where they started sit in protest from November 26, 2020. After a long struggle of about one year Modi had to scrape the three laws unilaterally, but the promises given were not kept. About 750 farmers lost their lives during the agitation. Since then farmers have campaigned against BJP candidates in all elections, and the BJP has been paying its heavy cost in subsequent elections.

RSS cannot afford to lose their support among farmers in the first place and secondly its larger dream of establishing a Hindu Rashtra. It is due to this reason they have chosen BKS to launch agitation against their own political wing called the BJP under leadership of PM Narendra Modi. As the SKM, BKS has also demanded guarantee of Minimum Support Price for their produce.

SKM had observed third anniversary of their agitation on November 2022, and has demanded legal guarantee for MSP for their produce among others. They are planning to restart their second phase of agitation against the Modi government, if their demands are not met.

RSS-affiliated BKS has not only voiced their concern over the MSP but has also demanded a rollback of GST on agricultural goods to lower input costs for agriculture. It has threatened to intensify their protest if these are not met by the Modi government. “Government will face trouble if demands not met in time,” warned the BKS leaders in Kisan Garjana Rally. The warning was spelled clearly against the BJP-led central and state governments. BKS is also pushing the Centre to increase the financial support provided under PM-KISAN.

One disturbing trend is also emerging. BKS has demanded permission for commercial production of genetically modified crops. Recently, Modi government has allowed GM-Mustard cultivation, while experts have warned against any permission since GM crops is harmful for humans and ecology. A case has already been filed against GM crops in the Supreme Court of India on which notices have been issued to stakeholders including the Centre. This demand of the BKS, shows that RSS is also trying to keep their support base among the corporate at the same time.

PM Narendra Modi’s assurance of “doubling the farmers’ income by 2022” has miserably failed, and farmers continued to suffer and hundreds of them committing suicides across the country. With BKS in the war path and SKM has already been agitating, the entire farmers’ community of India is against Modi’s agricultural policies. (IPA Service)