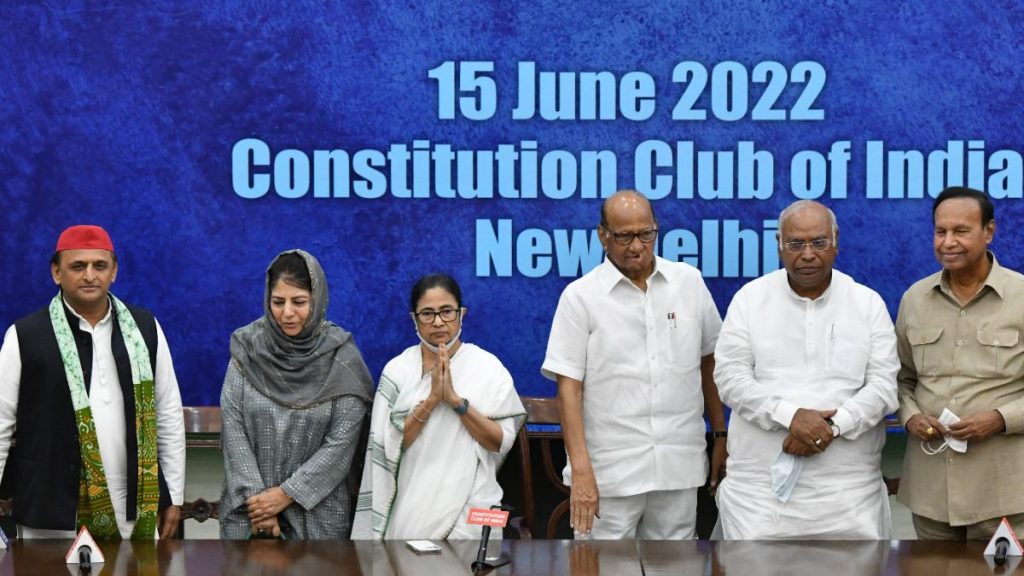 The meeting of the seventeen opposition parties of the country on June 15 at the instance of the West Bengal Chief Minister Mamata Banerjee to decide on nominee for Presidential elections due on July 18, has been a big success considering the problems which the regional parties were having with the Congress in the recent months.

What was significant that all the political parties present agreed to have a common candidate and after rejection by the NCP supremo Sharad Pawar of his candidature, the opposition conclave empowered Mallikarjun Kharge, Sharad Pawar and Mamata Banerjee to decide on a common name before June 21.The last date for nomination is June 29. That way, the leaders have got time to agree on a common opposition candidate. If the BJP is serious in opting for a consensus, the process will show results by next week. The opposition will accordingly frame its strategy.

Two names were discussed at the meeting after Pawar declined to be the candidate — former West Bengal Governor Gopal Krishna Gandhi, the grandson of Mahatma Gandhi having an impeccable record for fighting for secularism and constitutional values. The second candidate is Dr. Farooq Abdullah who has a long political record with strong faith in Indian democracy. If the consensus bid fails, the opposition can very well choose its own candidate for the final battle on July 18.

As of now, as per the electoral college for Presidential elections, the NDA headed by the BJP is ahead of the common opposition candidate by around two percentage votes. One calculation says that NDA just needs 13,000 electoral college votes to ensure the victory of its candidate. That is possible easily through the support of the BJD led by Navin Patnaik and the party YSRCP led by Andhra Pradesh chief minister Jagan Mohan Reddy. BJD has got about 31, 000 electoral votes, so for the BJP led NDA, just a fraction of BJD votes is adequate to secure BJP candidate’s victory if there is a contest. Patnaik has already talked with the senior BJP leaders including PM and it seems that BJP is counting on his party BJD’s support.

That way, it was good that the Congress on its own did not organize the opposition meet. Many parties which attended the June 15 meeting would have not attended, if invited by the Congress. Mamata might have made some procedural mistakes in calling the meeting, but at the end, it has been a positive development for opposition unity. Sonia Gandhi is in hospital, Rahul Gandhi is spending his time in ED office. Mallikarjun Kharge on his own could not organize such big attendance.

Now what next? The anti-BJP unity shown at the June 15 conclave has to be taken forward and there Sharad  Pawar and Mamata Banerjee along with M K Stalin have to play the main role. It is clear that Narendra Modi and Amit Shah have targeted Rahul Gandhi and for next few months, the Congress leader will be tied up with his ED questioning regarding the National Herald issue. Notwithstanding the legality of the NH issue, the fact remains that Rahul has given written statements covering many tricky issues of shares transfer and these will be further followed up making it difficult for Rahul to focus on the coming assembly elections.

That is the tragedy of the Congress and the opposition also. In the next round of state assembly elections, polling will take place in Himachal and Gujarat by year end. BJP has virtually completed all the preparations and the BJP war room   sources say that the saffrons will bring the Congress strength below 50 this time   as against 77 in 2017 polls. Many seasoned observers of Gujarat politics are saying that it is free turf for BJP in Gujarat. The Gujarat PCC is paralysed. Hardik Patel has joined BJP and there is no direction from the Congress high command. In Himachal, the situation is no better. If the Congress does badly in these two states, its immediate impact will be felt on the assembly elections in the other states in 2023, Madhya Pradesh, Rajasthan, Chhattisgarh and Karnataka.

The Congress is the largest opposition party in the country in the anti-BJP camp. Nobody disagrees to that, but the ground reality is that in the last eight years since Narendra Modi took over as the prime minister, the Congress strength has declined steeply, while the regional parties have emerged stronger. Different political parties have varying ideologies, but these parties have fought BJP and defeated them, while the Congress has been defeated in most of the direct fights with the BJP. Only recently, the Congress lost its sure seat from Haryana in Rajya Sabha elections and In Karnataka, the BJP got an extra seat due to poor understanding between  the Congress and the Janata Dal(S).

Let us look at the facts. In the 2019 Lok Sabha elections, the Congress and the BJP were contestants in 374 seats the Congress lost in 92 per cent of the seats where it fought the BJP. As against the Congress, other regional parties did much better by fighting the BJP in their respective states. As of now, the Congress runs the state governments on its own in two — Rajasthan and Chhattisgarh — and is a partner in the ruling coalition in three states, Tamil Nadu, Maharashtra and Jharkhand. The party lost Punjab to AAP in the latest assembly elections and witnessed its worst performance ever in the crucial Uttar Pradesh assembly polls getting only two seats out of the total of 403.

Rahul Gandhi may feel that only the Congress has the ideology to fight BJP, but in all the states which went to polls in the last two years, the regional parties fared much better in defeating the BJP compared to the ‘ideology-driven’ Congress. In Bengal, in the 2021 assembly elections, the BJP mobilised all its muscle power and huge financial resources to dethrone the Trinamool government, but it faced its worst defeat. Trinamool got more seats — 213 out the total of 294 — while the BJP got only 77 seats. The Congress could not secure a single seat.

In 2019 Lok Sabha polls, there were 250 direct fights between the Congress and the BJP, and the Congress won just six seats.  This itself tells the real story of the preparedness of the Congress in taking on the BJP. In Uttar Pradesh, out of 80 Lok Sabha seats, the Congress got only one in direct fight against the BJP; in Bihar, the party got one out of 40; in Madhya Pradesh, one out of 28; in Chhattisgarh, it got two out of 11; and one in Jharkhand out of14. In other states like Gujarat, Rajasthan, Haryana, Delhi and Himachal, the party got zero seats in 2019 elections. However, last year, the Congress got one Lok Sabha seat in Himachal in by-election.

An analysis of the Congress seats in Lok Sabha now shows that out of its 53 members, 28 are from  southern statesalone.15 are from Kerala, 8 from Tamil Nadu, three from Telangana and one each from Karnataka and Puducherry. In two states, Kerala and Tamil Nadu, the Congress got seats due to combined strength of its alliance partners; otherwise, the 2019 tally would have been much lower. This stark reality that the Congress is not the natural party of governance anymore and it has to treat its alliance partners, especially the powerful regional parties with respect, should be recognized by Rahul Gandhi if he really means to work with the regional parties to take on the Prime Minister Narendra Modi.

After the Presidential elections, the Congress has to focus fully on the   assembly elections in 2022 end and 2023. There are states where the Congress is the only major rival against the BJP. The Congress has to improve its performance in the interests of boosting opposition challenge to BJP in the 2024 Lok Sabha polls. The Congress   has to put its own house in order and emerge as a fighting machine to take on battle ready BJP. That is the only way, the grand old party can get back its position and power in the opposition block. (IPA Service)