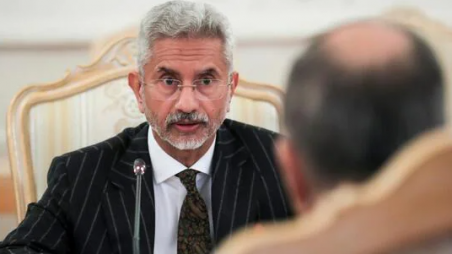 In today’s divided world, an independent foreign policy can be possible only when pressure from the US and EU can be countered with the “what works to my advantage” doctrine, which is why Russian President Vladimir Putin couldn’t stop himself from praising Indian Prime Minister Narendra Modi for not falling prey to US diplomatic coercion, and instead carrying on life with Russia as if there was no Russia-Ukraine war!

That said, India’s External Affairs Minister S. Jaishankar should be credited for pressing home with the “what works to my advantage” doctrine, which convinced Russia that what works to India’s advantage also works to Russia’s advantage under the current transformed world order. Never has Russia and India been so closely tied to each other than at the present time.

Jaishankar should also be credited for keeping the USA at arm’s length while at the same time keeping in close touch with it. In recent weeks, President Joe Biden has not been happy with India’s choice of decisions. Biden understood well that, contrary to expectations, US pressure wasn’t working on India, and India wasn’t treading cautiously when it came to Russia.

Modi had one arm extended toward Russia, and the other reaching out to the United States. Not mid-distance, or equidistance, but rather “my distance”. And, as if to underline to the United States that two can play the “works to my advantage” game, Russia became the biggest exporter of crude oil to India, replacing Iraq. Of course, this has led to trade imbalance but Russian oil is proving good for India.

EAM Jaishankar met Russian counterpart Sergey Lavrov in Moscow and both pledged to increase trade and expand economic cooperation. India’s EAM told the Russia Foreign Minister that it was time to end Russia’s war with Ukraine as developing countries like India were suffering.

But to the dispassionate observer it sounded half-hearted, India’s bid to play peacemaker. That said, does Prime Minister Narendra Modi have leverage over President Vladimir Putin to press home with a perceived advantage? Maybe yes, most probably not! Putin is not the sort who is swayed by friendly overtures.

Putin and his foreign minister are permanent fixtures on the world stage because they were the original inventors of the doctrine of “only if it works to my advantage”. Lavrov has been Russia’s Foreign Minister since 2004. That said, Jaishankar is no spring chicken. He has been long enough on the world’s foreign policy circuit to carry the torch for India as good as anybody else.

Food and energy security are India’s priorities. For Putin, it’s Russia and Ukraine. Putin wants the West and NATO out of Russia’s hair and, ultimately, Ukraine is his decision. The Russian President is not the one who bends to pressure. Without doubt Modi knows this.

In September this year, at the Shanghai Cooperation Council meet in Samarkand, Modi told Putin that this was not an “era for wars” and the BJP put Modi on par with Putin. Others said Modi carried equal influence with both Russia and Ukraine and, therefore, was the best placed to mediate a Russia-Ukraine truce.

Of course, people keep massaging Modi’s ego and much was made of Modi’s Samarkand comment. It is another matter that India has been the recipient of the best of both worlds ever since Putin invaded Ukraine, and the world went hunting for a peacemaker.

India’s trade ties with Russia is now tied to the Russia-Ukraine War, especially India’s oil purchases, which bothers the USA. India has a 22% share of total crude imports from Russia. The trade imbalance bothers India but the “works to my advantage” doctrine has prevailed.

The “significant growth” in bilateral trade and the $30 billion target set by the two countries distinguishes the ties. Currently, trade stands at $17 billion. It may sound cynical, but the Russia-Ukraine war has actually helped India and Russia come closer still, and focus on areas of “natural convergence of interests”.

Both India and Russia are major G20 economies. And better counsel says India should not be overzealous to play peacemaker under pressure because doing so wouldn’t “work to my advantage”, especially with a war on, and the global markets under pressure.

That is the cynic talking; also the warmonger. There are enough of them around including scavengers, hyenas who profit from war. India should be guided by scientific temper, logic and reasoning and huge doses of humanism. That said, what happens to “Mission PoK” if, according to Modi’s advice to Putin, it was not an “era for wars”? (IPA Service)