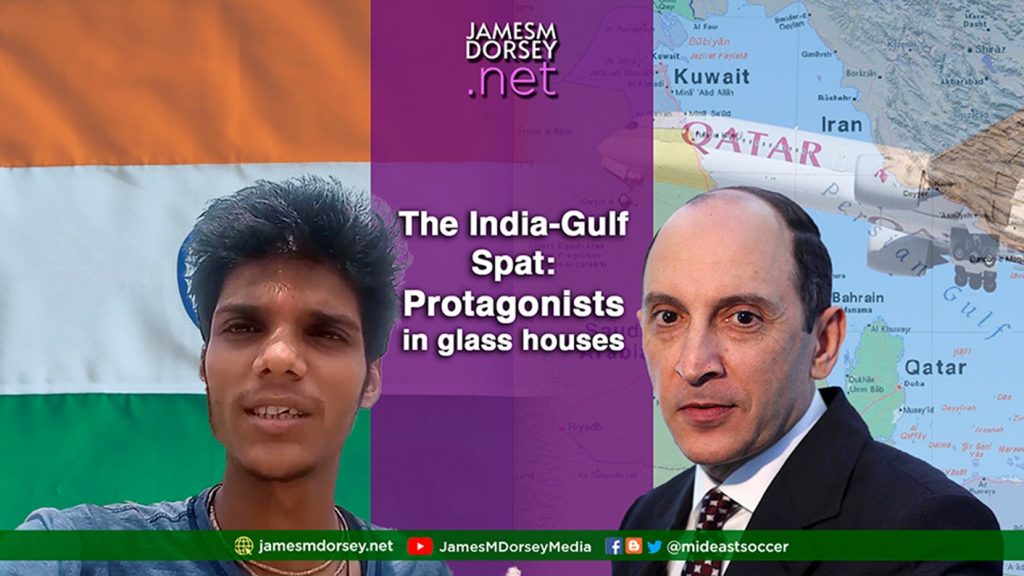 Qatar Airways CEO Akbar Al-Baqr, a man known for his pithy retorts, pretended to quiver in his pants. Hindu nationalists had called for a boycott of the Gulf airline after Qatar took India to task for derogatory remarks about the Prophet Mohammed and Muslim worship by two spokespeople of the country’s ruling party.

In an apparent spoof,  AlBaqr told an Al Jazeera journalist how the call for the boycott by a young, obscure Hindu nationalist with the Twitter handle Vashudev had forced him on Monday to abruptly leave an important aviation conference in Cancun, Mexico, and return home to deal with the crisis.

“Habibi (my friend), I cancelled all my meetings and immediately flew to Qatar because our biggest shareholder decided to boycott our airline from his headquarters…in a terrace office house. He was having a power cut in his neighbourhood at the time that he made that devastating video. I don’t know how to operate anymore. I have grounded all the flights,” Al-Baqr mockingly said.

“Habibi, we are willing to give you one whole plane to make your Tik Tok video, or maybe we can give you two litres of petrol free for you (to) take this call for a boycott back. Otherwise, how will we survive, habibi? How will our multi-billion-dollar airline survive? So, Vashudev, once you come back from the railway track, please consider our offer,” Al-Baqr went on to say.

Al Baqr’s mockery was the latest in a war of words on social media and widespread condemnation across the Muslim world.

The BJP further instructed its communications officials not to criticize other faiths or their symbols and religious figures.

The criticism of the BJP was long overdue. The party stands accused of marginalizing and discriminating against India’s 200 million Muslims, the world’s largest Muslim minority that accounts for approximately 14 per cent of the country’s population.

Qatar’s Assistant Foreign Minister Lolwah Al Khater appeared to recognise this when she tweeted that “the Islamophobic discourse has reached dangerous levels in a country long known for its diversity & coexistence. Unless officially & systemically confronted, the systemic hate speech targeting Islam in India will be considered a deliberate insult against the 2 billion Muslims.”

The sharp condemnations by Qatar, Saudi Arabia, Kuwait, Oman, the 57-nation Islamic Organisation of Islamic Cooperation (IOC), and others added to the war of words.

The United Arab Emirates’ foreign ministry said the BJP officials’ comments were “contrary to moral and humanitarian values and principles .”It insisted on the “need for respecting religious symbols… and countering hate speech.”

Calling for a boycott of Indian goods, Oman’s grand mufti, Ahmad bin Hamad al-Khalili denounced “the insolent and obscene rudeness of the official spokesman for the ruling extremist party in India.”

Many on social media echoed the boycott call under the hashtag #AnyoneButTheProphetOModi.

The problem for Muslim states is that they should have long taken a stand against the Islamophobia of Modi’s Hindutva version of Hindu nationalism but preferred not to do so for economic and strategic reasons.

India is a Gulf investment target, while the sub-continent views the Gulf as an essential trading and energy partner. Qatar supplies almost 40 per cent of India’s gas requirement. In addition, some 6.5 to 8 million Indian nationals live in the Gulf and account for roughly 25 per cent of Qatar’s population.

The spat with India puts the Muslim world in the same boat that the United States and Europe find themselves.

As much as anything else, the Ukraine war has in recent months highlighted European and American double standards in adhering to the lofty principles of human and refugee rights as well as international law.

Gulf states saw a double standard in differences in US and European commitment to Ukraine’s defence compared to Gulf security. The Gulf and beyond also noted differences in attitudes towards and the welcoming of ‘white’ Ukrainians as opposed to non-white refugees from wars in Syria, Iraq, and Afghanistan and repression in countries like Eritrea and Ethiopia.

The Ukraine war hinges US and European credibility and claims to a moral high ground to countering accusations of double standards and hypocrisy by applying values and principles universally rather than selectively.

However, the shoe is on the other foot when it comes to the brutal repression by China of Turkic Muslims in the north-eastern region of Xinjiang.

For opportunistic geopolitical reasons, the United States, Europe, and some of their partners and allies have been outspoken about Chinese policy in Xinjiang and imposed relevant sanctions.

Virtually no Muslim partner of the US and Europe has joined the choir. On the contrary, some like Saudi Arabia have gone as far as justifying the repression.

They did so to earn brownie points in Beijing and find common ground with China in suppressing domestic dissent and non-violent political Islam under the mum of fighting terrorism.

As a result, if the United States and Europe are throwing stones from a glass house, so are Muslim nations when they rightfully take India to task. It’s a vulnerability that those eager to distract attention from BJP policies are happy to highlight.