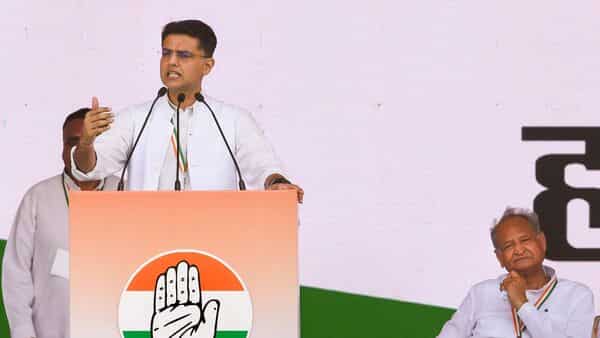 A thrilling game of check-and-mate has started within the Congress, with speculations looming large on whether Sachin Pilot would get the throne of Rajasthan in case Ashok Gehlot has to vacate the Chief Minister’s post. Till date, all the questions have remained unanswered in Congress. Meanwhile, Ashok Gehlot called a meeting of the party MLAs and apprised them that he’d file his nomination for the post of the party president, while assuring that he would still remain accessible. “I am not going anywhere, don’t worry,” he has reportedly said. Even though senior Congress leader Digvijaya Singh has asserted that the party adopted a one-man, one-post resolve at the leadership meet in Rajasthan’s Udaipur earlier this year, but Gehlot said he could well hold, not one but three simultaneous posts, signaling that he was not ready to give up his Rajasthan role. On the other hand, Sachin Pilot had joined Rahul Gandhi in Kerala on the latter’s much-acclaimed and ongoing Bharat Jodo Yatra. Speaking to the media, Pilot said that one person couldn’t hold two posts in the party, clearly hinting that Gehlot would need to step down as Rajasthan CM if he had to become the Congress president. Meanwhile, Rahul Gandhi is said to have promised the CM’s chair to Pilot ahead of the 2018 elections. When instead Gehlot was picked after the election results, Gandhi is said to have reiterated his promise to Pilot and asked him to be patient. However, Gehlot is moving to a bigger position and has some leeway, this may open an opportunity for Pilot to occupy the throne of Rajasthan.

Seeing the success of Rahul Gandhi’s Bharat Jodo Yatra in Southern India, NCP chief Sharad Pawar has acknowledged that big padyatras or foot marches like ‘Bharat Jodo Yatra’ have a political impact and people welcome with such sincere intent. However, Pawar recalled: “When Chandrashekhar (former Prime Minister) had taken out a similar padayatra, it had received a tremendous response. I had also taken out a march from Jalgaon to Nagpur (in 1980) for farmers.” On the other hand, Sharad Pawar asserted that West Bengal Chief Minister Mamata Banerjee is ready to conclude her differences with the Congress in the national interest, and come together to form an alliance of opposition parties ahead of the 2024 general elections.

Prashant Kishor’s recently took a dig at Nitish Kumar by saying that “Fevicol should make him a brand ambassador for being glued to CM’s chair”. Rebutting the ridicule, the JD(U) national president Rajiv Ranjan Singh alias Lalan Singh strongly lashed out at the poll strategist and said that Kishor was merely a businessman and not a politician. Singh said Kishor has been making use of different tactics just to sell his products like a salesman, and the same is quite evident in other states also. However, Kishor surprised everyone by paying a visit to Nitish Kumar triggering speculation of a collaboration in the 2024 national elections. Pawan Verma, a former leader of Nitish Kumar’s JD(U), reportedly arranged the meeting and was also present. Nitish Kumar didn’t reveal much about the meet-up, dismissing it as a routine conversation. The Bihar CM smartly played his card by meeting Kishor and gave a message to the people of Bihar that Kishor was still his man. Now, the people of Bihar are confused vis-à-vis Kishor’s current status, whether he is a Nitish or BJP agent or just a salesman for hire?

AHEAD OF ASSEMBLY POLLS, HIMACHAL CONGRESS EMBROILED IN TURF WARS

With 2022 Himachal Pradesh assembly elections only months away, the Congress is likely to be facing infighting within the state unit. Ram Lal Thakur, MLA from Naina Devi, refused to withdraw his resignation from the post of party vice-president, annoyed with an appointment in his constituency without his approval and consultation. Himachal Pradesh Congress president Pratibha Singh has been lamenting the infighting within the Congress and blamed it for the massive defeat in the previous Assembly election. However, she has also said that the issue has been addressed to some extent ahead of the upcoming elections. Presently, the Congress has a number of influential leaders well-heeled in their respective areas, such as Mukesh Agnihotri in Una district, Sukhwinder Sukhu in Hamirpur, Asha Kumari in Dalhousie, Dhani Ram Shandil in Solan, and Kaul Singh Thakur in parts of Mandi district. However, none of the leaders is as popular or acknowledged as the late Virbhadra Singh, evident from the kind of immense state-wide popularity the former CM had enjoyed. The void following Singh’s death gave rise to a tussle within the state unit on who should be the party’s main face in the Himalayan state. Senior leader Anand Sharma, who was also an important part of the group of 23 leaders that wrote a letter criticising the style of functioning within the party, recently quit as chairman of the party’s steering committee for the Himachal Pradesh elections.

BSP TRAINS EYES ON UP MUSLIMS AFTER 2022 DEBACLE

The BSP’s strategy for 2024 general elections is regaining its lost base among the Dalits and the Muslims. After BSP registering its worst UP assembly elections defeat in terms of seats, winning only one seat in the 403-member House and garnering just 12.8% of the votes, the party is planning to focus more on Muslim votes in UP. Due to the aggressive anti-Muslim campaign by the BJP, the community voted en bloc to support the SP. The anti-BJP Hindu community voters too voted for the SP after the transfer of the Muslim vote. Now, the BSP has launched a massive membership drive as the first step towards consolidating its position ahead of upcoming local body elections in the state this year end. While Mayawati would come to terms with any political party to beat the BJP, the BSP supremo aspires for the maximum number of seats to contest in Lok Sabha polls.

Tightrope Walk For India Between Fiscal And Monetary Policy
Posting....