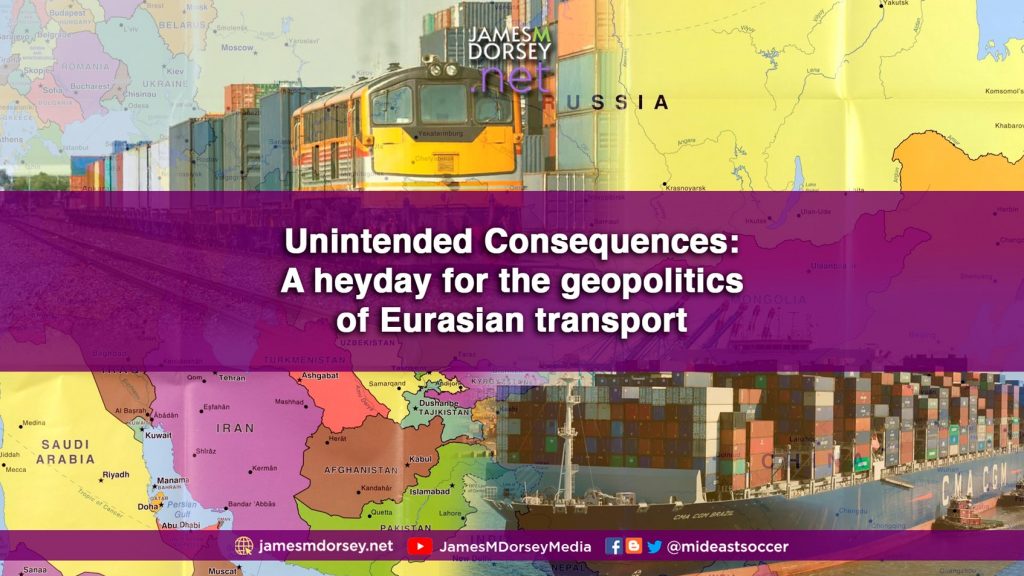 When Russia invaded Ukraine, it took itself off the map of Eurasian transport corridors linking China and Europe. At the same time, it breathed new life into moribund routes that would allow goods to travel across the Eurasian landmass without traversing Russia. It also opened the door to greater Russian connectivity with the Middle East and South and Southeast Asia.

Next month’s summit of the Shanghai Cooperation Organisation (SCO) in the Uzbek ancient Silk Road trading hub of Samarkand could provide a lynchpin for alternative routes.

The SCO, which groups China, Russia, India, Pakistan, Kyrgyzstan, Uzbekistan, Kazakhstan, and Tajikistan, is certain to set the scene for an expansion into the Middle East as well as agreement on the construction of a crucial Central Asian railroad.

The summit is expected to finalize Iranian SCO membership at a time when the Islamic republic stands to benefit from shifts in the geopolitics of Eurasian transportation.

The summit will further welcome Saudi Arabia, Qatar, Egypt, Bahrain, and the Maldives as dialogue partners and Azerbaijan and Armenia as observers. The United Arab Emirates has recently also expressed interest in an association with the group.

Kyrgyz officials believe that leaders of the Central Asian nation and China have agreed to sign an accord at the summit to build a 523-kilometre China-Kyrgyzstan-Uzbekistan railway that has been on the drawing board for 25 years. The railway would link the three countries with Turkey, Iran, and Central and Eastern Europe.

Lack of political will coupled with logistical and technical obstacles, particularly in mountainous Kyrgyzstan, and the high cost caused delays that now appear to be perceived as less problematic because of the fallout of the Russian invasion of Ukraine.

Uzbek President Shavkat Mirziyoyev predicted that the railway would “open new opportunities for transport corridors linking our region with markets in the Pacific Ocean area. The move will add to the widening of existing railway routes connecting East with West.”

Uzbekistan has long asserted that the railway would offer the shortest route from China to markets in the Middle East and Europe, while China sees it as a way of evading the risk of violating US and European sanctions that continued transport through Russia could invoke.

The new railway would feed into the rail line connecting Uzbekistan to Turkmenistan’s Turkmenbashi International Seaport on the Caspian Sea.

From there, it can feed into the Caucasus, Turkey, and the Black Sea via the Azerbaijani port of Baku or Iran, India, the Gulf, and East Africa through the International North-South Transportation Corridor (INSTC) that makes use of the Iranian port of Anzali and potentially Chabahar.

The Baku port agreed in July to let Turkey’s Albayrak group, which has close ties to President Recep Tayyip Erdogan, manage the facility, expand its cargo handling capacity, and build a terminal for fertilizers.

The INSTC, a 7,200-kilometre patchwork of independently operated railroads, highways, and maritime routes, also provides a corridor northward to Kazakhstan and Russia.

The patchwork could prove important to Kazakhstan, which has stood against the invasion of Ukraine despite its dependence on Russian food, fertilizer, petrochemical, and iron imports.

Kazakh President Kassym-Jomart Tokayev has explored diverting oil exports to Europe from traversing Russia to flowing through Iran and Turkey.

Adding fuel to the fire, Kazakhstan has also not shied away from seeking to turn sanctions against Russia to its advantage, including by offering an alternative to Western businesses leaving Russia.

Chinese analysts expect that the railroad, which would start in Kashgar, will help transform the economy of Xinjiang, the Chinese troubled north-western province that is home to brutally repressed Turkic Muslims.

Moves to bolster Central Asia as a critical node in East-West and North-South transportation corridors come amid increased public discontent in the region and stepped-up jihadist activity.

Operating from Afghanistan, Islamic State militants vowed to wage a jihad in the region that would initially target Uzbekistan and Tajikistan.

Islamic State militants hailed rocket attacks in recent months against targets in the two countries as the “great jihad in Central Asia” that would unite the five former Soviet Central Asian republics with Afghanistan, Pakistan, and India in a caliphate.

A United Nations report warned in July that members of the East Turkistan Islamic Movement, a Uighur jihadist group that garnered notoriety in Syria, had defected to the Islamic State because Afghanistan’s Taliban leaders prevented them from launching cross-border attacks in Xinjiang.

“Although ETIM/TIP (Turkestan Islamic Party), like al-Qaeda, has been keeping a low profile for now, it is really a ticking time bomb for China in its neighbourhood,” said Faran Jeffery of Islamic Theology of Counter Terrorism, a UK-based Muslim counterterrorism group.(IPA Service)