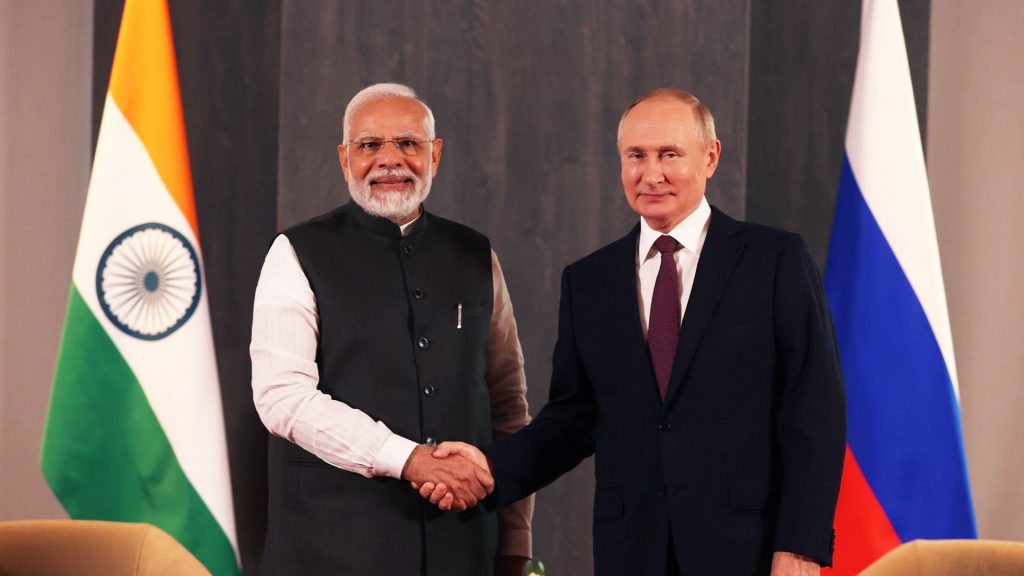 By Anjan Roy from Toronto

Prime minister Narendra Modi’s televised interview with the Russian president, Vladimir Putin at the SCO summit on September116 at Samarkand is reverberating in the Western international media even five days after the event. All major media houses in USA and Canada are repeating the conversation between the two and showing the recorded clip over and over again.

Some are going to the extent of analysing the body languages of the two leaders at the meeting. While the Russian leader surely lacks the earlier “swagger” of a big power, Modi is being represented at the meeting as confident and expansive.

On the other hand, no other single leader has given it so strongly to the Russian president, Vladimir Putin, a stinging criticism of his policy on Ukraine. It painted as if Russia under Putin is living in an antiquated era of wars and confrontation. Modi’s statement has caught Russia off guard.

The global media also took note of the Indian PM’s stiff attitude towards China by avoiding any direct meeting with him while all other heads were competing against each other to befriend the Chinese leader Xi Jinping. During the meet, although Modi and Xi were on the same platform, they did not shake hands.

As a result of the statement, India is getting the attention that it never got earlier Xi Jinping and Putin have both got a lower level of attention and image projection. Some of the most powerful Western media houses, who are assertively anti-India in their stance, are also running with the crowd and giving coverage.

This is surely playing into the hands of the western diplomatic establishment. They have got a forceful support from where they expected not much. India has been viewed as a major backer of the Russian establishment for the sake of numerous give and take between the two countries.

However, one has to evaluate what effect it can have on the Russian diplomatic circles given the fact that the conversation has surely reflected badly on Russian stance. Right in the midst of the adverse reactions from the International audience, Russia is not in a position to extract much retribution.

Nothing remains fixed in love, and politics. In the long run, Russia would certainly ask for a price for the strong statement made by Modi. For once, the televised interview was set up by the Russians hopefully to gain some backing from India. It has backfired.

Russian president was in waiting to receive Modi and they kicked off their tete-a-tete with the opening statement, which stole the show and set its tone. Immediately after Modi, Putin expressed his appreciation of the Indian stance and sought to explain the Russian position.

For the time being at least, India is in a sweet spot. It is getting a plateful supply of energy items, which is a vital requirement for the country. An overwhelmingly large proportion of the energy requirements are imported. Two major producers, Russia and Saudi Arabia, are vying with each other to supply to India.

India’s requirements are also large and therefore is in a position to positively influence the supplier behaviour. But this comfort should not install complacence. The over-indulgence in energy uses and developing dependency could result in disaster in the long run.

No one country displays more than Germany, which has cuddled itself into believing eternal supplies of Russian gas and oil at cheaper prices. Germany is facing a severe energy crisis and a grim winter of energy shortages.

On the diplomatic front as well, India should now build up on the new environment and develop its own support base casting the net wider among the middle level nations in Asia and Africa. (IPA Service)