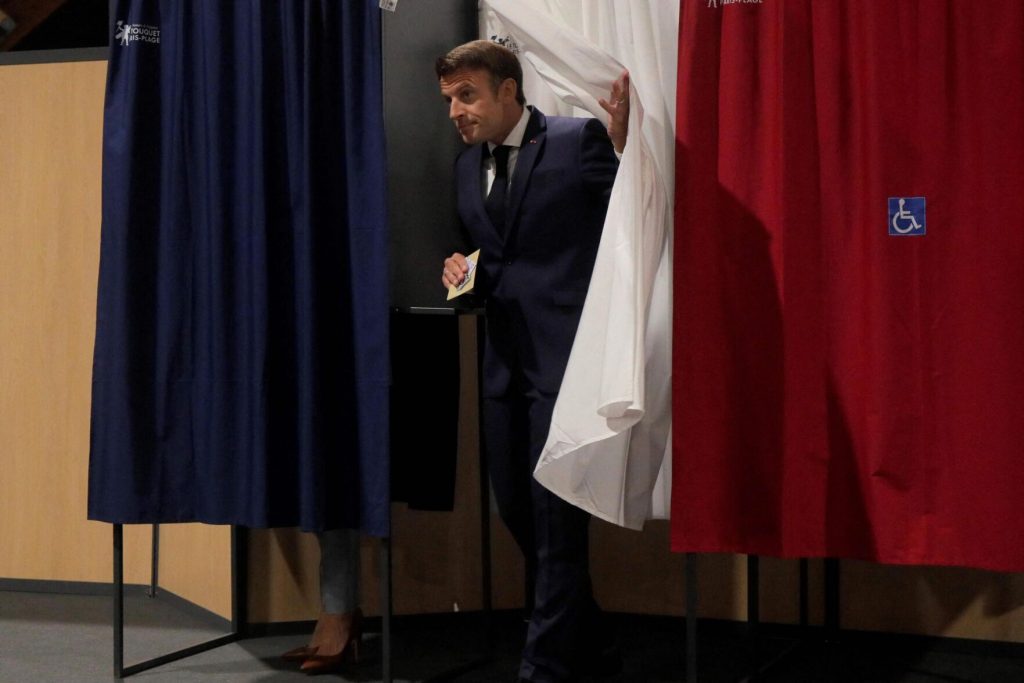 “France has had enough of its monarch president. If the French people decide to give us a majority then we will govern . . . Destiny is in your hands,” crisply said Jean-Luc Mélenchon, the leader of the coalition of various hues of left and green at a gathering of working people a few days before the runoff elections on June 19 for the 577-member L’Assemblée nationale (French parliament)..The maverick ultra left icon failed to defeat President Emmanuel Macron-led Ensemble’s coalition, but the ruling party fell well short of a majority. No single party is dominant in the new chamber. It won 245 seats, 101 less than the last election in 2017. It’s vote share is 38.6 percent. France has now has a hung Parliament.

Mélenchon’s red-green alliance Nouvelle Union populaire écologique et sociale (the New Ecological and Social Popular Union – NUPES) made sharp gains winning 131 seats with 31.6 percent vote share, Another 22 seats went to various other left-wing candidates. But the ultra-right, Rassemblement National party bagged 89 seats – 11 times more than it bagged in 2017- with less than 18 percent vote share. President Emannuel Macron-led Ensemble emerged as the largest single group but to form the government, it needs support of 44 MPs. In the previous parliament Macron’s La République En Marche and its allies were in majority. Whether he would strike a deal with Perrine “Marine” Le Pen-led RN or other conservatives is to be awaited.

Things might have been different hadn’t 52 per cent of voters refrained from casting their votes. Some left-leaning columnists say that this had benefiter the far right and deprived NUPES from expected results. However no pollster projected that the NUPES would edge out the ruling coalition to come out ahead of the president’s coalition in terms of the number of seats on the night of the second round on 19 June.

Even incorrigible optimists did not hope that NUPES would win 200-plus seats. Nonetheless, NUPES is to be a key player in the French politics and governance in the next five years. In fact, some commentators think that the NUPES supremo Jean-Luc Melenchon should prepare for a decisive 2027 parliamentary election. NUPES strength in new parliament is up by over 40 percent. Melenchon, head of La France Insoumise (France Unbowed, LFI) is expected to start campaigning for the LFI’s politico-economic agenda: dismantling of the Fifth Republic and set up of a Sixth Republic, better socio-economic programmes such as lowering of retirement age from 62 to 60 and raise of minimum monthly wage to €1,500 ($1,575) and capping of prices for basic foodstuffs. Melenchon is for disobeying of such European Union rules that conflict with France’s interest. In fine, Melenchon’s anti-capitalist direction is open and is binding for Left leaning parties. .

However, the most worrisome outcome of last Sunday’s parliamentary poll is the emergence of the ultra-right RN. It is a major political shock. Le Pen hailing what she called as a historic event promises to mount a “firm opposition” to the president’s agenda while remaining “respectful” of France’s institutions.“The French people have decided to send a very powerful National Rally group to the National Assembly, making it a little more ‘national’,” she told her followers.

However, NUPES will be in the frontline of resistance against right-turn in the French policy and governance. It is less a new left than a new way of organising France’s left-wing movements after the collapse of the Socialist Party under Hollande’s leadership. The Communist Party of France which is now constituent of NUPES is weaker than ever before. Melenchon’s call for pro-people policies has attracted voters of both these parties. NUPES is readying itself for constitutional reforms such as more citizen referendums that would reduce the power of the French president. These two parties as well as the Greens that make up the alliance have coalesced around

The future of red-green alliance that emerged as a new type of Leftism depends on Melenchon. It is a new experiment. An eloquent and formidable debater burdened with a volcanic personality He made a strange choice by choosing not to run for re-election in the Assemblée Nationale, which could become the front line of French politics in the event of a relative majority for the presidential coalition.

A section of French political commentators describe the NUPES as s an unquestionable political marketing success,’ but it also masks a statistical stagnation. In total, it did not actually win many more votes in the first round than the sum of the left parties that had campaigned separately in 2017 (26.1percent of the vote instead of 25.4 percent) Melenchon has been able to bring about a dynamism in the functioning of the left which faced stagnation for long. Even if Macron’s coalition is able to form the new Government in the  next two months the Left led by Melenchon has got big capacity for intervention in policy issues. Melenchon has arrived as an alternative and the way he navigates the coalition during the current tumultuous period, will determine the future of the Left in the next five years. (IPA Service)

Shinde says he is with Hindutva, won’t return to Sena
Posting....