Falling Rupee Will Add To Inflationary Pressures On Indian Economy 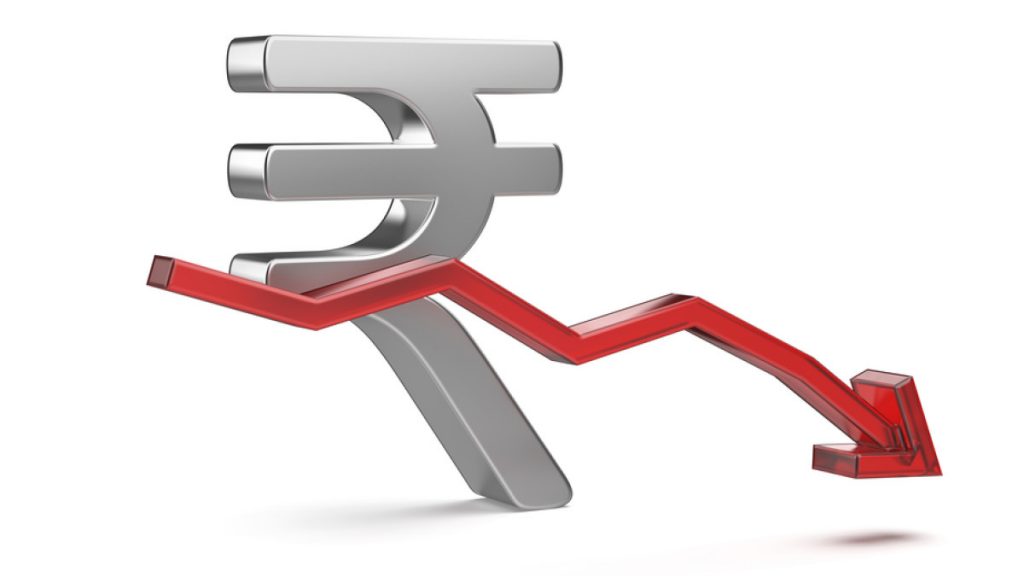 All is not well when it comes to India’s trade deficit and value of Indian Rupee. While the trade deficit has widened to a record $25.63 billion in the month of June, latest data suggests Indian Rupee for the first time has crossed 80-mark against US dollar.

There are two aspects to this story: why the rupee is falling, and why the fall is not benefiting our exports and increasing Current Account Deficit (CAD). But let us take the second point – of whether the rupee fall helps us—first.

Some optimists hold the view that rupee depreciation is good for our exports. Here, data suggest otherwise. A look at our major export items suggests these are income elastic, that is, they tend to perform well when there is an upsurge in foreign income. In case of India, there is a change in composition of exports from price sensitive items such as leather footwear, dairy products, beverages, textiles and apparel products, to more income sensitive items such as refined petroleum products, iron and steel, chemicals, machinery and transport equipment (engineering goods), and pearls and precious stones such as diamonds.

For example, the share of refined petroleum products (high-speed diesel, motor spirit, aviation turbine fuel, naphtha, etc.) in India’s export basket increased dramatically from around 2% in 1993 to around 17% in 2021. The surge in exports in the case of petroleum and metal items is because of India’s potential in oil refining and mining activities. However, the Russia-Ukraine war and the onset of weak global economic growth meant a lower demand for income elastic items that comprise a major chunk of India’s exports basket.

Even considering the price sensitive items such as leather footwear, textiles and apparel, etc., we find that India is losing out to its competitors such as China, Vietnam, and Bangladesh, because of qualitatively ‘low value’ export items. This is particularly true for trade in similar commodities that is, ‘intra-industry trade’ (IIT). With the gradual lowering of the industrial tariff across countries, the incidence of overlapping trade flows within product categories have become a common phenomenon. So in case of India, while the exports were growing, imports were growing even faster resulting in a growing CAD. The share of domestic value-added content in foreign final demand went up by 6.2%, from 32.6% in 2005 to 38.8% in 2020.

Take the case of the pharmaceutical industry, an important sector in IIT trade. India continues to sustain higher trade deficits in certain segments of Active Pharmaceutical Ingredient (API), and medical equipment segments. In fact, India lacks comparative advantage in manufacturing other COVID-19 related medical items, such as medical and non-medical wearable, disinfectants and sterilization products. Similar is the case with textile and apparel industry.

Government on its part has undertaken a series of interventions to make Indian industry and products competitive. Some of the key initiatives include establishment of the National Manufacturing Competitiveness Council (NMCC) in 2004, launch of the ‘National Manufacturing Policy’ in 2011, introduction of the ‘Make-in-India’ scheme in 2014 and ‘Atmanirbhar Bharat Abhiyan,’ in 2020. However, the impact of these initiatives in making our exports competitive is yet to bear fruit.  On the contrary, India’s CAD is likely to increase further as crude oil, precious metals, and coal still contribute to bulk of our imports, and are necessary items for a growing economy like India.

Under a floating exchange rate regime, the market determines the exchange rate. In economics, there are two ways to determine the correct value of the exchange rate. First, is the goods market approach where an attempt to find the correct value of exchange rate is based on the assumption of ‘law of one price’ (LOOP), using the concept of purchasing power parity (PPP). LOOP states that in the absence of transport and other costs such as tariffs, identical (similar) goods will sell for the same price. If LOOP holds true, then the real exchange rate is one. Therefore, if domestic inflation is higher than the US inflation, the rupee is expected to depreciate against the dollar. Second, is the asset market approach, where the value of exchange rate is conditional upon the inflow and outflow of capital into and from the domestic economy.

In foreign exchange markets, expectation plays a crucial role. High CAD and higher inflationary expectations, makes domestic assets (government bonds) less attractive. Over the last one year Foreign Institutional Investor (FII) has been a net seller in the domestic stock market. Last year, FII have pulled out 80% of their money from Rs 2,70,000 crores invested during aftermath of COVID-19.  The World Investment Report published by UNCTAD shows Foreign Direct Investment (FDI) fell by 30% to $45 billion in 2021. India’s foreign exchange reserve also fell below $600 billion dollars during the first week of July. Currency depreciates as foreigners pull out money from India.

How does one explain inflation in India? One is because of the higher cost of energy and crude oil in the international market. The war, by imposing sanctions, has reduced the supply of Russian gas and oil. It caused disruption in the agriculture value chain causing world food shortage.  The substitute is the pricier US energy, which means a higher crude and energy price in the international market.

In fact, a depreciating rupee may add-on to the inflation numbers by making the imports costly. Quantitative tightening is not going to help in the event of supply-side disruption and when there is lesser availability of foods in the market. Although the inflation numbers, both CPI (7.02%) and WPI (15.9%), dipped a little in June 2022 in comparison to May, but the recent imposition of Goods and Services Tax (GST) on pre-packaged food items is likely to increase inflation numbers. Going by LOOP, we should not be surprised if the value of Rupee touches 83-mark within the next 6 months.  (IPA Service)

The author is Professor, School of Management, Mahindra University.