Congress Decline In Assam Has Led To Vacuum In Opposition Politics 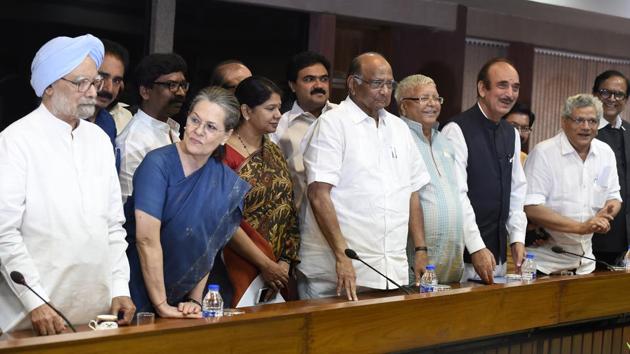 It has been a year since the results of the assembly elections of Assam were declared and the BJP scripted history in this northeastern state by winning for the state consecutively. During the election campaign, the Opposition in the form of the Grand Alliance led by Congress presented itself as the only alternative to the BJP-led National Democratic Alliance. Although the Grand Alliance was able to receive only 1% fewer votes than NDA, the elections gave a blow to the hopes of the Opposition, which was desperate to anyhow defeat the saffron party-led alliance.

The defeat has only widened the internal tussle within the grand old party, which is yet to recover from the shock of the defeat. Within a year only, two significant leaders of the party Sushmita Dev, a former president of the All India Mahila Congress, and Ripun Bora, a former state Congress president, left the party to join the Trinamool Congress, a West Bengal-based party. There are leaders still within the party who aren’t happy and are looking for greener pastures.

It’s an open secret that the grand old party is facing problems of credibility for allying with Dhubri Lok Sabha MP Badruddin Ajmal-led All India United Democratic Front (AIUDF), a party which is seen as a communal one by the Hindu Assamese speaking people and by the tribals, mostly Hindus. The Congress leadership in its desperation to fight against the BJP seems to be confused about AIUDF. Last year, the grand old party broke the alliance with the AIUDF after the assembly polls, where the party performed badly in Upper Assam and other Assamese dominated areas. But within months the party again allied with Ajmal’s party for the Rajya Sabha polls this year but its candidate Ripun, who is now in TMC, lost the polls.

The united Opposition had the numbers but due to cross-voting by 8 MLAs, where the majority of them belonged to AIUDF, the Congress failed to send its representative to the Upper House. Due to this, the party doesn’t have any representative from Assam and also from the northeast region in the Upper House. As the alliance with AIUDF failed again, the state Congress leaders again started criticizing Ajmal and his party. The party is failing to match the tactics of its former strong leader, Himanta Biswa Sarma, the present chief minister of Assam and BJP’s dominant leader in the northeast region. The BJP’s victory in the second seat proves that Himanta still has contacts with a section of leaders from Congress and even AIUDF. That the arrogance of Congress central leaders, particularly Rahul Gandhi, forced Himanta to join the BJP is one of the major reasons, the party, in its once stronghold, is paying heavily currently. The state Congress leaders know this but continue to deny the reality.

The main opposition party Congress is ceding the space and there is a growing vacuum. The voters, who are against the present saffron dispensation, are looking for alternatives. This was seen in the recent Guwahati Municipal Corporations where Aam Aadmi Party and Assam Jatiya Parishad opened their accounts but the grand old party failed to open its account. Out of the 60 seats, the BJP won impressively by taking 49 — in addition to the three seats which were won uncontested — while its ally Assam Gana Parishad won 6 seats out of 60. Significantly, both the lone candidates of AAP and AJP belonged to the Muslim community. Although Congress somehow was able to maintain the second position, the AAP was just 3% behind the grand old party, which secured 13% votes.

The AAP is emboldened by this performance. However, this is too early to say that the party is on the way to replacing the grand old party. On the other hand, there is Raijor Dal, a new regional party formed in 2020 just like AJP, which is trying to get a foothold in the state, particularly in Assamese dominated areas. Last year, the party led by Sibsagar MLA Akhil Gogoi came second by pushing the Congress to the third place in the Mariani seat by-poll. In the Thowra seat by-poll, the party was in a tight contest with the grand old party. Both Mariani and Thowra are in Upper Assam and these two constituencies were strongholds of the Congress, which even won these in the assembly elections last year.

Clearly, this shows that the Opposition voters in the state are looking beyond Congress. TMC is also in the race to take advantage of this situation. The grand old party, however, still has a hold among the Muslims, accounting for 34% of the state population. It is in competition with the AIUDF, which has been declining for the last 3-4 years but has got a new life after it secured 16 seats, an increase of 3 seats in comparison to the 2016 assembly polls, due to the alliance with the Congress.

There is a growing vacuum in the Opposition due to the failure of the Congress but any other party trying to occupy that has the challenge to completely decimate the grand old party, which, presently, is in no position to currently challenge the juggernaut BJP but at the same time it isn’t completely vacating the Opposition space. While the opposition parties are trying to secure the second position, the BJP under Himanta Biswa Sarma continues to dominate the northeastern state of Assam, which has now turned into a BJP bastion. (IPA Service)