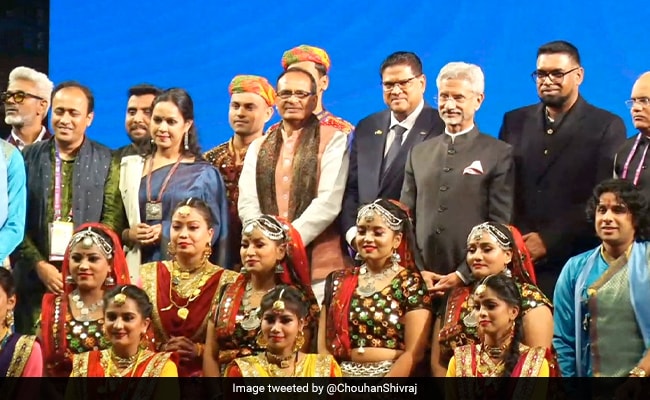 Madhya Pradesh Chief Minister Shivraj Singh Chouhan had to apologise as many of the invited delegates for the Pravasi Bharatiya Diwas were unable to enter the main hall in Indore due to lack of space. The rush was for Prime Minister Narendra Modi’s inaugural speech for the 17th Pravasi Bharat Diwas convention.

Some of the delegates tried to hold a protest as they jostled for space, prompting Mr Chouhan — who was sharing stage with the Prime Minister — to apologise from the dais. “Indore has opened its heart (to you) but I’m sorry because there is some lack of space,” said the Chief Minister.

It, however, did not stop the stream of complaints which flooded social media and was widely circulated.  “I have come from the US. I’m a registered delegate but now they are not letting me in, they have told me to watch from the screen. Thousands of people are there. Why do we come here to see the screen? It is actually an insult,” said Anand, who came from California.

In one video shared online, Julie Jain, who came from the US, said it was extremely humiliating. “If I had to watch the opening ceremony of this conference on TV, why would I come to India from the US after spending so much money?” she questioned.

A senior police officer said the seating arrangement at the venue was handled by officials of the Ministry of External Affairs.

In his inaugural address, PM Modi said Pravasi Bhartiyas are the “brand ambassadors” of India and have a significant place in the journey of the country as it enters the ‘Amrit kaal’ of the next 25 years. “Your role is diverse. You are the brand ambassador for yoga, ayurveda, cottage industry, handicrafts and also millets,” he said.