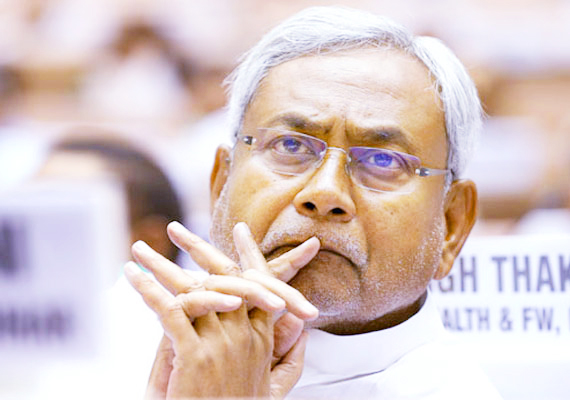 It was certainly not a coincidence that on the day Prime   Minister was addressing the Independence   Day rally, Amit Shah in association with the senior BJP leaders and members of the core group of party was working on the design to throw out the newly formed mahagathbandhan government of Nitish Kumar in Bihar.  Within shortest possible time.

After Bihar Chief Minister broke out from the NDA and entered into alliance with the RJD led opposition parties, the BJP leadership has launched an all-round attack on him. Though the taunts and insults are political in nature, attempts are not spared to depict the   CM in poor light. Old phrase of Nitish being opportunist are being raised, but it is a simply a façade. The BJP duo realise that the colour of the political structure is changing, and Nitish’s action was simply a manifestation of this change.

The RSS leadership had come to assess the looming threat to their hegemony and political supremacy. Basically, this was the reason that the BJP leadership at the directive of the RSS appointed Sunil Bansal, a prominent RSS face, party’s key election manager, as its national general secretary in charge of three opposition-ruled states — West Bengal, Odisha and Telangana — in run-up to the Lok Sabha polls in 2024. Bansal, who was the party’s general secretary (organisation) in Uttar Pradesh, is credited with overcoming the Samajwadi Party challenge and ensuring its victory in UP. He had handled three elections in the state: 2017 and 2022 UP assembly polls and 2019 general elections.

Bansal’s appointment came a day after the BJP lost power in Bihar. His primary task is to prepare the blueprint for the change of power in Bihar and strengthen the saffron party’s position and prospects in these three states where it made substantial gains in the last general elections. Three states are of vital importance for Modi and Shah, and more than them for the RSS. He has assisted Amit Shah in 2014 elections. His clout and strength could be judged from the fact that he replaced three general secretaries Kailash Vijayvargiya in West Bengal, Tarun Chugh in Telangana and D Purandareswari in Odisha.

The BJP has been evolving the strategy to make up for the possible loss of Lok Sabha seats in two prominent eastern states Bihar and Bengal. Bihar (40) and Bengal (42) together have 82 Lok Sabha seats. The BJP, along with then ally JDU and the LJP, had won 39 seats in Bihar and 18 in Bengal in 2019. Nevertheless, BJP leaders confess that it would be difficult to retain their seats in Bengal and Bihar. But hope that the latest move of Modi-Shah will do some magic.

If the sources are to be believed, the BJP will try   to engineer a major split in the JD(U) as well as RJD. Names of some Congress leaders also feature on the list. It is not that Nitish and Tejashvi are unaware of Shah’s move. Already strict vigil is being kept on the gullible members.

Some Congress MLAs are up in arms against the induction of only two members in the government and they are contemplating shifting their allegiance to BJP. They have been asked by the BJP leaders to wait and watch. The other reason for Modi and Shah to launch an aggressive attack on Nitish government is the BJP leaders across the country have turned sceptical of the future of Modi and his government. In some states the fall of the NDA government in Bihar has propelled factionalism and badly demoralised the rank and file. Nitish’s challenge has shaken them. BJP’s strategy has been to keep Nitish confined to Bihar and not to allow him space to manoeuvre at the national level. In Bihar, the BJP faces a tough challenge with almost the entire range of political forces — backwards, extremely backwards and Dalits — joining hands with Nitish.

Even the senior BJP leaders confess that they haven’t been able to make credible inroads among the OBCs, EBCs and Dalits in Bihar and frantically need a powerful leader with public appeal to deal with the caste combination in Bihar. (IPA Service)