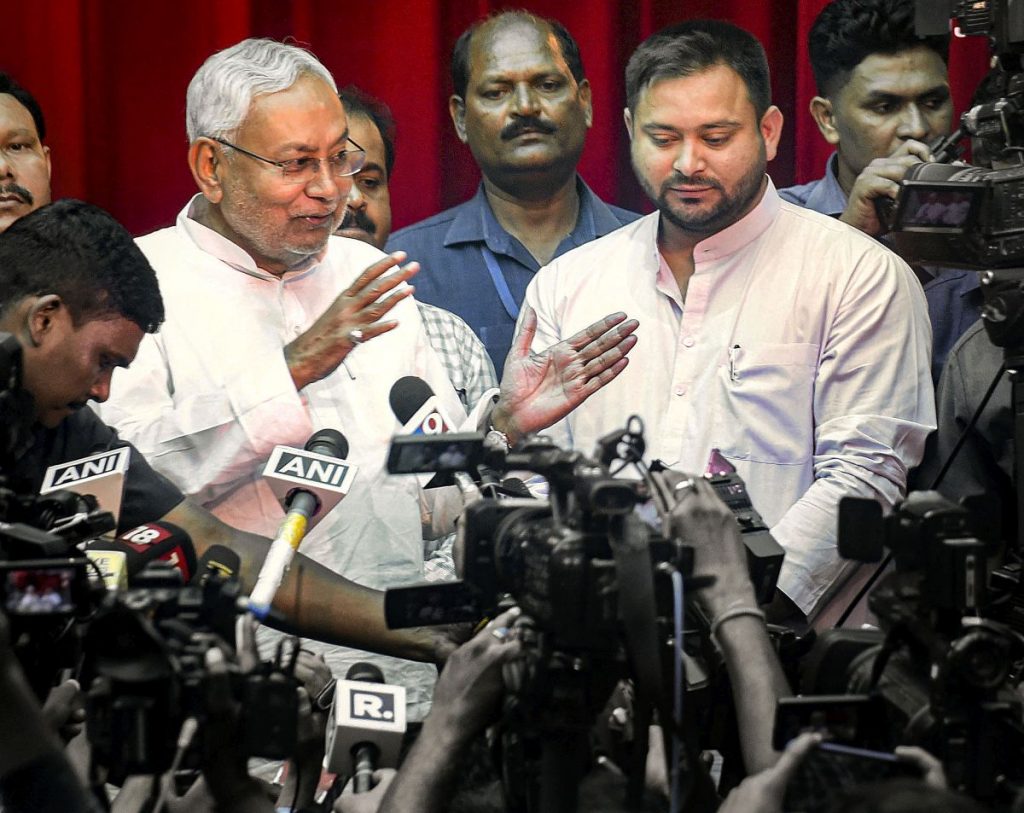 Indian politics takes a new turn with the fall of the BJP-led government in Bihar. The BJP-led NDA crumbled down there when the JD(U) bid farewell to BJP.  Even though for several months, the conflict between BJP and JD(U) was brewing, nobody expected that it would pull down their government so swiftly. Within the time span of 24 hours, the BJP-led government was ousted and the Mahagathbandhan government came into power. This nature of the political churning process in India has its own lessons for the students of political science to learn.

The socio-economic crisis that was deepening in the country exploded into a political change in Bihar. The bigwigs in RSS-BJP never thought that it would make such a turn so unexpectedly.  They were in the midst of celebrating the Maharashtra victory where they engineered a split in Shiv Sena and enthroned a government of their choice. The setback of BJP in Bihar is a shock to the Sangh Parivar forces. To that extent it can be considered as a shot in the arms of anti-BJP forces.

It is roughly one month back the national executive meeting of the BJP held in Hyderabad boasted about their supremacy in power for the coming 40 years. And the BJP president openly expressed their craving for single party rule. Their ideological mooring for everlasting power and single party rule is not a secret. Still the BJP has nurtured a special sort of cunningness to hide their intentions wherever needed. They have no hesitation to pose as the champions of coalition politics when it suits their political game plans. In Goa, Manipur and various other north-eastern states, they have formed governments with need-based alliances and cooked up a majority. Speaking too much about political morality, they go to any extent to capture power and cling to it. Constitutional authorities and government agencies are deployed lavishly to meet their undemocratic immoral political ends.

Coalition politics warrants a democratic political culture from its partners. BJP, because of its fascist political character, lacks this culture. For tactical reasons they may swear loyalty to the partners. But all their moves would be against its spirit. RSS has implanted hidden and unhidden agenda into the political and administrative projects of the BJP everywhere. Any government with the partnership of BJP has to tread through that path only. Nitish Kumar and his party has experienced it since the beginning of 2000, of course with small intervals.  For any political party having little allegiance to secularism, sharing power with the BJP would be a matter of constant conflict.  All along these years, Nitish Kumar would have undergone this conflict in his conscience. The happenings in Maharashtra, where the BJP absorbed a major portion of Shiv Sena and made them to play according to their tunes is said to be the immediate reason for the JD(U) to snap its alliance with the BJP.

Other reasons with socio-political dimensions also have its role in shaping the new political developments in Bihar.  The struggle against Agnipath, the issue of caste census, etc, are important among them. The resignation of former JD(U) president and former Union minister R C P Singh might have signaled new dangers to him. Reports are there saying that the BJP has approached certain JD(U) ministers and MLAs to enact the Maharashtra model. All these came together to evolve the new political developments in Patna.

The statement by Nitish Kumar immediately after the swearing in as the chief minister of Mahagathbandhan is noticeable. He stated that 2024 will not be like 2014. It has clear warning for Narendra Modi who came to power in 2014 and desires to continue in power in 2024. Bihar developments have its own specific features with its own strength and weakness akin to the politics of India today. The theory that BJP is unbeatable has failed once more in Bihar. The success of Modi is not due to the merits of his policies but due to the disunity among the opposition.  RSS-BJP has the talents to make use of this disunity in their favour. The personal whims and egos of several leaders in the opposition also cater to this disunity which in turn will help only the BJP.

The people of India have proved that if there were a reliable alternative against BJP, they would prefer to vote for them. The realities of life have taught them that the promises of ache din were nothing but a lie. The people need a change. They are poor and voiceless. But they are wise enough to take appropriate decisions at the appropriate moment. This is the challenge before the opposition forces in the complex Indian conditions today. The battle for 2024 becomes most significant, as the RSS-BJP is hell-bent to mould India according to their hindutva schemes. The sociology and economics of hindutva proclaim that it is only another name for the Indian version of fascism. To fight such an evil enemy, higher levels of political conviction and preparedness are needed.

Bihar is a crucial arena in the battle for India.  It reflects the mood of the common people of the Hindi heartland. Now a new government has come to power with its proclaimed stance against the ideology and politics of BJP. That is the strength of the new formation. It is not the outcome of peoples struggles for political change. A common minimum programme based on people’s aspirations is yet to be realized. These are its weaknesses.  But undoubtedly it is a positive development that has a far-reaching impact on the Indian political landscape. Keeping this in mind, the Left will play its distinctive role in chartering the course of the new government. The left would unitedly and independently mobilise the masses to strengthen the foundations of the new government and to make it trustworthy to the common people’s dreams.(IPA Service)

Democracy Is Under Siege As India Celebrates 75th Anniversary Of Independence
Posting....