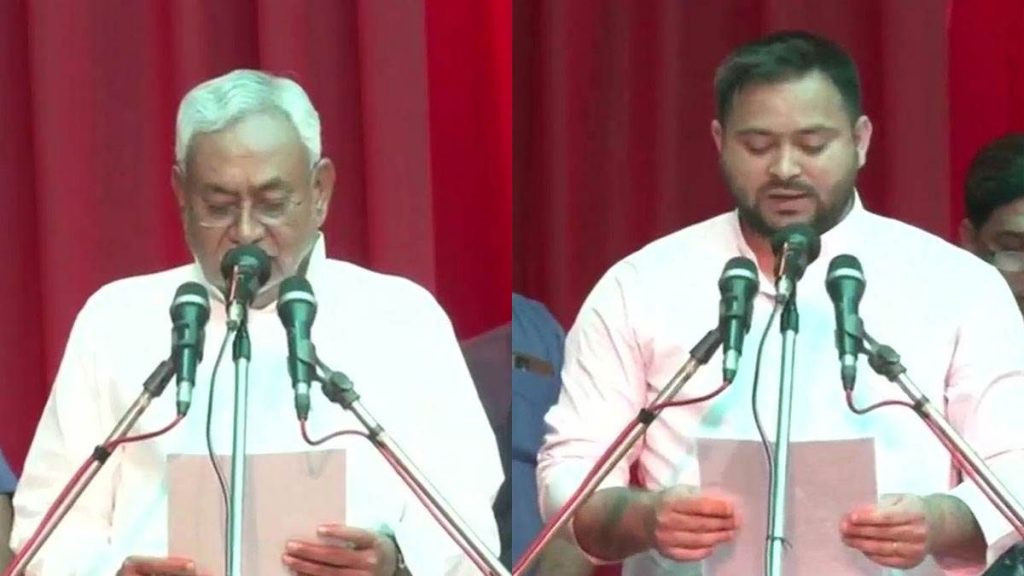 Bihar Cabinet expansion is likely to be done after August 15. The JD(U) is probably going to have 13 ministers, the RJD has settled for 16. The Congress will be given four berths, while former chief minister Jitan Ram Manjhi’s HAM will have one member in the cabinet. From the Congress, Dr Shakeel Ahmed Khan, Rajesh Ram, Vijay Shankar Dubey, Bijender Chaudhary are likely to earn a place in the Cabinet. The grapevine is that the Chief Minister Nitish Kumar desires a Speaker from the Congress, but RJD wants Awadh Bihari Choudhary as a Speaker in the House. After 1967, the left parties are likely to join the government. Left parties (CPI, CPI(M), CPI(ML) might be given three berths in the cabinet. CPI(ML) will take a decision on August 13 of joining the government or not. Nitish has been asked to prove his political mantle with majority on the floor of the House at a specially convened session of the Assembly on August 24.

After RJD-JD(U) government in Bihar, the discussion of a third front has been repeated, the key difference this time is that JD(S) patriarch H D Deve Gowda has expressed his hope of the erstwhile Janata Dal Parivar re-emerging as a political alternative in the country. The former Prime Minister said the various phases which saw Janata Dal (United) led by Bihar Chief Minister Nitish Kumar and Lalu Prasad Yadav-led Rashtriya Janata Dal (RJD), both constituents of the Janata Parivar, coming together to form a government in Bihar, made him recollect the memories of those days when they all were united.  The realignment of Janata Dal Parivar which include RJD, JD(U), HAM in Bihar, BJD in Odisha, JD(S) in Karnataka, Samajwadi Party, RLD in Uttar Pradesh, Indian National Lok Dal in Haryana, Socialist party of Kerela and West Bengal.  HD Deve Gowda is trying to unite them on one platform and will further plan strategically to fight unitedly against the BJP in 2024.

RJD IS CONFIDENT OF UNITING OBC, MUSLIM AND DALIT VOTES IN BIHAR AGAINST BJP

With RJD-JD(U) government in Bihar, once again the Ramdhari Singh Dinkar, poem titled ‘ Singhasan Khali Karo ki janata aati hai, was heard on the streets of Patna. To go back in history to recall that once Jay Prakash Narayan called for a ‘total revolution’ from the grounds of Ramlila Maidan in Delhi. During his call for total revolution, JP read a poem, Singhasan Khali Karo ki janata aati hai, Chief Minister Nitish Kumar saying “Those who came to power in 2014, will they be victorious in 2024? I would like all (opposition) to be united for 2024. I am not a contender for any such post (prime ministerial post)’. Elections in Bihar are due now only in 2025, a year after the Lok Sabha polls. Political observers say the coming together of the JDU and the RJD will help consolidate Muslim, OBC, Dalit and maha dalit votes in favour of the mahagathbandhan.

The BSP’s strategy for 2024 general elections is revived once again.  Apart from the base among the Dalits and the Muslims, BSP is also planning to put focus on non-Yadav OBC votes in UP. The OBCs compile up around 35-37 per cent of voters in Uttar Pradesh. Yadav voters make up about 10-12 per cent of votes but they are conferred as the dominant voters in the OBC category of castes. The BSP is looking to woo the rest 25 per cent of OBC votes. BSP supremo Mayawati is marking the presence of her party’s senior leaders to all districts of UP to organise unite non-Yadav OBC voters in favour of BSP.

As per the report, the Congress party is ready to do a major change in the party’s organisational structure by giving more powers to Priyanka Gandhi Vadra. The grapevine is that Congress general secretary, in charge of Uttar Pradesh Priyanka Gandhi Vadra may be assigned a new role. Recently in national capital, Congress intensified its protest against price rise and GST. Wearing black clothes, Priyanka Gandhi crossed the barricades where she held a brief sit-in before being taken away by cops. She, along with other Congress leaders were dragged into buses from outside the party’s headquarters in Delhi.  (IPA Service)