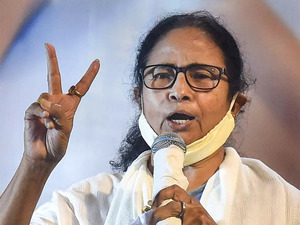 Despite flickering signs of a revival of lost support for the CPI(M) in West Bengal , observers are not yet sure that the party is about to turn the corner in the short term. By no means unsympathetic to the CPI(M) or the Left in general, they refuse to view the party’s recent impressive recovery in the Ballygunge Assembly by-poll as the clinching evidence of a long-awaited upturn.

Within the CPI(M)’s Bengal unit, especially among the ranks of youth cadres who have been waging a hopelessly one- sided battle against the ruthless Trinamool Congress(TMC) party machinery there is no marked enthusiasm for a national anti-BJP struggle , partnering with their tormentors.

There are two major reasons for the hardening of the Bengal CPI(M)’s stance against the TMC: first the prolonged sufferings faced by party cadres and their families in the unequal struggle to protect their minimum existential rights . Despite their best efforts, state Left leaders could not help them very much, facing a politically ruthless ruling party. The politicization of the state administration and the police reached unprecedented levels. Even common supporters and sympathizers faced cooked-up charges, police repression and legal harassment in and out of jails! . In Bengal, however, this was nothing new, as during the 34 years of the CPI(M) led rule in the state, the local CPI(M)secretary controlled the police station.

The Left’s own political agenda makes it more difficult to align at any level with the TMC on even major political issues outside Bengal or Kerala , as suggested by Party Secretary Sitaram Yechury recently. One explanation: the CPIM affiliated DYF is about to hold its all Indian conference shortly.

As a youth leader explained, ‘All state delegates would attack and condemn the TMC for its corruption, opportunism and its autocratic method of functioning. Visiting delegates from other states would be informed in detail about the gruesome situation in Bengal. They would find it difficult to urge upon their state leaders to work in unison with a party like the TMC on any major issue’.

It was the Bengal CPI(M)’s sustained agitations in recent times against the TMC that had helped the left regain some of its lost ground. Their struggles strongly resonated with the harassed people of the state. Popular support had been evident for the widely acclaimed campaigns by the Red brigades in running subsidised food canteens and free medicine among the needy in urban and suburban areas. The same could be said about the unstinting Left support for the aggrieved job seekers on the verge of starvation who had been deprived of employment in schools and colleges, because of corruption involving TMC Ministers! The Left also took the lead in providing legal and other assistance provided to poor families/ victims of rapes and murders and poor peasants terrorized by pro TMC elements in the villages.

The growing support among the people was reflected in by-election or civic poll results. After the 2021 Assembly polls, the Left was recapturing its earlier runner-up position to the ruling TMC, ending the BJP’s brief period of glory. Even the worst excesses committed by TMC musclemen and the hostile police force, there was a noticeable rise in the Left votes again.

However the significance of the CPI(M)’s relatively spectacular showing at Ballygunge Assembly seat by-poll a few days ago should be assessed judiciously in the present context. Most left leaders from CPI(M) state Secretary Mohammad Salim downwards were carried away by a few positive signs at Ballygunge.

They pointed out that the winning margin for the TMC had declined from over 70,000 to just over 20,000, within a space of five years. And the percentage of votes polled by the CPI(M) had risen from 6% to over 30% (approx) this time. The demotion of the BJP from runner-up to the third position was an added sweetener.

It is common knowledge that on polling day only 41% of the voters turned out to vote at Ballygunge , a somewhat unusual phenomenon in Bengal especially where Muslim voters constitute 52% of the electorate.

Clearly, one reason the CPIM) put up a such a close fight against the TMC was that the latter did not win as many Muslim votes as before. Much of the Muslim vote went not to the Congress, but to the Left. The candidature of former BJP Union MInister Babul Supriyo had queered the pitch for the TMC. Many Muslim voters did not conceal their anger over what they alleged to be anti/minority speeches in the past.

However, CPI(M) leaders lost no time in claiming that the tide had turned and that the TMC’s days of speaking as the sole political force in Bengal for the Muslims were over. Left supporters even brought out processions celebrating the ‘moral victory/ at Ballygunge in some places.

This is where the post-poll reactions of Bengal-based Muslim leaders assumed special significance that the Left should not ignore.

A spokesman of the Bengal Imam Association claimed that the Left had no reason to celebrate during a TV interview. The CPI(M), he insisted, could not claim that the Muslim opinion was turning in it favour.

He reasoned that Muslims in Bengal were increasingly upset with the TMC Government which had made the community many false promises. It had promised new modern schools, colleges and universities to help the backward minorities. Government jobs, better roads and hospitals had been promised.

Actually very little had been done. Only Imams were given a measly allowance, which no one had asked for. TMC Ministers resorted to cheap gimmickries like sponsoring Iftar parties and resorted to cheap symbolism,. But there were hardly new jobs or opportunities! The nomination given to Babul for Ballygunge seat was the final straw that broke the camel’s back.

There was indeed a broad agreement among Muslims not to vote for him. Even repeated visits and requests made by Kolkata Mayor and TMC Minister Firhad Hakim made no difference. As for the Left, they never contacted us. Even so the steep decline of the TMC’s winning margin has sent a clear message to the ruling party. said the Imam..

Others pointed out that Mr Hakim could not visit the aggrieved family of late Anis Khan, the youth victim of violence allegedly carried out by local policemen at Amta in Howrah district some days ago. Angry protesting demonstrators drove out the Minister and his team of police and other officials.

As for the Left bringing out rallies to celebrate the Ballygugne results , other Muslim leaders said, the winning margin at one area could not be seen as a general anti-TMC trend among the minorities,. Muslim leaders at Furfura Sharif felt that Left leaders were celebrating too soon.

‘What about the TMC’s massive win at Asansol Lok Sabha seat by over 3 lakh votes for the first time over the BJP? Why did the Left fare so poorly in Asansol which also has a significant Muslim number of voters? Clearly the Left must work a lot harder and cover much more ground before it can claim any success.’ Furfura ( a major spiritual centre for the Muslims) leader Najmul Sahadat Siddique was quoted as saying.

However, there is no denying that after a decade and more of the TMC’s tenure, a section of Muslims in Bengal is looking to come out of TMC’s complete domination, but the fact remains that they still keep faith in the sincerity of the Chief Minister Mamata Banerjee. (IPA Service)