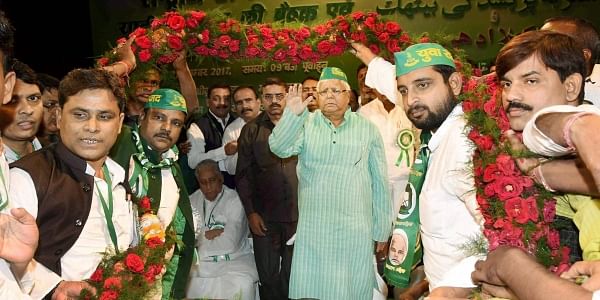 Lalu Prasad Yadav’s daughter Misa Bharati was named after the infamous Maintenance of Internal Security Act (MISA). The dreaded MISA was invoked to send many to jail before it was consigned to the pages of history. Lalu himself has had several jail visits, and it was only recently that he stepped out of one. Nobody likes to be in jail, not even politicians, but some have fared well while in jail.

Mohandas Karamchand Gandhi and Jawaharlal Nehru went to jail and returned with a halo round their heads. Not Veer Savarkar, or Lalu Prasad Yadav. Gandhi and Nehru did not grind corn or break stones. They had it pretty easy, except that they were behind bars. Time well spent, actually! Like the books they authored in jail were testimony to.

Savarkar in Andaman’s Cellular Jail was yoked to a bull and sentenced to payback in oil. Lalu Yadav had comparatively lenient times in hospital breaks. Now, the CBI is after Lalu and he might again end up in jail. Sleuths of the caged bird raided “17 tikhanas” of the Lalu Yadav family in New Delhi and Patna for their alleged roles in the land-for-railway jobs scam. Among those falling prey are Misa Bharati and the second Chief Minister of the family, Lalu’s wife Raabdi Devi.

There is also Hema Yadav, a lesser known daughter of Lalu Prasad. Journalists at least will remember Lalu saying that he wanted to turn Bihar’s potholed roads into Hema Malini’s cheeks! Those were better times for Prasad and his family of 11! Now, the Bihar Yadavs are not in power, and the CBI can’t wait to get its slippery fingers on the Lalu family, all in one fell swoop.

Naturally, a pall of gloom has descended on the Lalu clan, and if anybody can grasp Lalu’s apprehensions and fear, it’ll be the just-released from jail, former UP Minister and estranged Samajwadi Party stalwart, Azam Khan, who, like Lalu Prasad, isn’t any longer his former self.

Jail has left its awful marks on Azam Khan. There was the time when Azam Khan’s one word had sent the police of an entire UP district looking behind every bush for “Azam Khan’s buffaloes!” The buffaloes were apprehended, and then, to nobody’s surprise, Azam Khan was making lewd comments on actress Jayapradha’s mauve undergarments!

If time is witness, the reformed Azam Khan must have left his wits in the cell he spent 27 months incarcerated. To reiterate, no politician likes to spend time. Ask former Union Home Minister P Chidambaram and Karthi Chidambaram. Both father and son had spent days in Tihar, and now we hear Karthi, who has applied for anticipatory bail, could return for playing illegal Chinese-Checker!

It’s uncanny, and this is important, most politicians don’t seem to learn from time spent in jail. Perhaps, Navjot Singh Sidhu will. Time and tide wait for none, but Sidhu is an exception. Time waited for him. The cricketer-turned-comedian-turned-politician punched a senior citizen 30 years ago and the man died. And just when he thought he had cheated jail, Sidhu was sentenced to a year’s rigorous imprisonment.

Sidhu can spend the year cracking jokes and playing pranks on the jailor, and fellow inmates. The year will pass in no time. But like Lalu and Azam, Sidhu too will not be the same again, which will be a loss to Comedy Circus. The only person in the subcontinent who must be worrying and mourning would be Imran Khan. Last heard, jail was waiting for ‘The Khan’.

The long and short of it is, these are not good days for cricketer-turned-politicians. Sidhu has asked for “more time to surrender”, but jail he’ll go to come rain or shine. And maybe he will be the first politician who went to jail and then made jail reforms priority No.1 on his release. So many politicians haven’t, and most of the senior BJP politicians know the insides of an Indian jail.

They are the worst in the world. Some would scare even those of Ecuador and Columbia. Our politicians, who remain respected citizens even after being convicted for rape and murder—financial fraud and scandalous scams—need to be given the best of jail facilities.

Union Home Minister Amit Shah, who was jailed in Sabarmati Central Jail for an alleged role in the Sohrabuddin Sheikh fake encounter case, should himself look into the state of India’s jails. If not for anybody else, for the sake of politicians like Anil Deshmukh, Nawab Malik and Navjot Singh Sidhu, who deserves a smile on all 365 days of his incarceration for all the laughter he spread when he was free as a bird, and not a jailbird! (IPA Service)