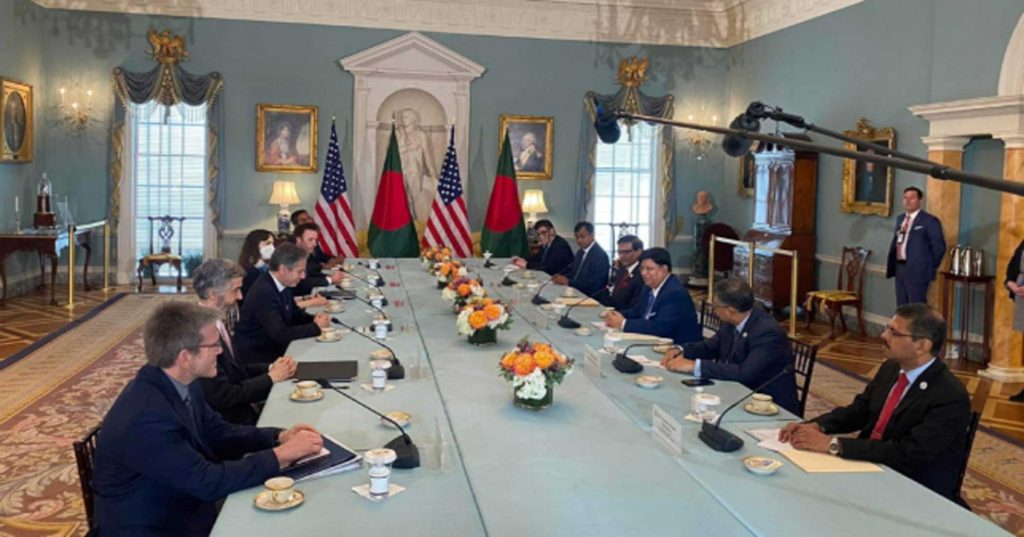 As the year comes to an end, relations between Bangladesh and the USA remain as frosty as ever. Yet another diplomatic spat of sorts occurred a few days ago, over the US Ambassador’s intriguing visit to the Dhaka residence of a ‘disappeared’ opposition leader.

The ruling Awami League (AL) leaders, already under considerable stress over an impending general election by next year-end, expressed their annoyance over the diplomat’s action, but noticeably avoided a confrontational posture.

In contrast, both the Dhaka-based Embassy as well as the US State Department strongly backed Ambassador Richard Hass’s move, much to the delight of the Bangladesh Nationalist Party (BNP). The state department used the social media to announce its stand, reiterating its commitment to uphold human rights.

The leader in US focus is Mr Sajedur Islam Sumon, who belonged to the BNP. Mysteriously, he remains untraced since 2013. The role of the Government is strongly suspected.

The US Embassy’s explanation is, the Ambassador was only probing complaints made by a civil rights group about the matter, along with similar reported instances of other opposition figures who also went missing during the Al’s tenure. He was trying to ascertain the facts of the situation from the family members of Mr Sumon but had to curtail his visit.

The reason: a group of people began protesting in the area. They suggested that Haas should instead institute an inquiry into the alleged genocide of intellectuals and secular political leaders that occurred in 1977. General Ziaur Rahman was then in power. He was also the founder of the BNP, incidentally. Nor was there any official explanation from Dhaka as to how the demonstrators reached the area or if anybody had tipped them off about the controversial visit.

Bangladesh Foreign Affairs Minister Dr.. A.K Abdul Momen, to whom Mr Haas later conveyed his concerns about the demonstration, did not feel there was any threat to anyone’s security. The incident would not impact US-Bangladesh relations negatively, he said ‘.

The main opposition BNP was not convinced. Its leaders accused the Al Government of harassing Mr. Haas. They condemned the AL’s allegedly poor record in handling issues related to human rights as well as democratic rights of opposition parties. Hundreds of people had been reported missing or killed in one-sided dubious encounters, especially by personnel of the rapid Action Battalion (RAB), in recent years.

The situation continued to deteriorate despite repeated warnings and concerns expressed by the US and EU countries, not to mention major international HR groups, to the Bangladesh Government.

Eventually, last December the Biden-led US administration slapped sanctions on seven senior RAB officials, along with a warning to Dhaka to deal with the opposition in a more transparent and accountable manner.

AL leaders in response alleged that the US had been fed much disinformation about the law and order situation by the motivated opposition. There were major allegations of the BNP aligning with the fundamentalist Jamat-e-Islami during its tenure. It carried out systematic repression and attacks against minority Hindus and AL activists.

But the US and EU countries in general overlooked such practices of the BNP and its declared bonhomie with Pakistan and Islamic fundamentalist organisations.

Bangladesh government has since appealed several times to the US to withdraw/reconsider its sanctions, but to no avail so far. However, there is a general feeling that over time, the number of clashes between the AL and opposition parties, as well as the dreaded ‘encounters’, has significantly reduced .

Ironically, there has been a marked increase in the level of violence directed against the Government, on part of the fundamentalist Hifazat-e-Islam group, resulting in major loss of official property and innocent lives. Often sporadic anti-government violence/arson has continued for 48/72 hours, as was noticed during the last visit of Indian Prime Minister, Mr Narendra Modi to Bangladesh, to mark the 50th anniversary of Bangladesh freedom day in 2021.

This has led to an angry, sullen reaction against the ruling AL from the large body of secular political leaders and people in Bangladesh, not to mention mounting concern in neighbouring India, resulting in an extremely delicate situation for Prime Minister Sheikh Hasina.

AL leaders and Ministers responded to the Embassy stand through a statement, questioning why the Ambassador did not feel it necessary to visit the Martyrs’ memorial in built Dhaka, as a mark of respect to the numerous victims of Islamic fundamentalism during the BNP’s rule. His controversial visit incidentally had occurred on the anniversary day for the memorial!

The Dhaka-based mainstream as well as social media were sharply divided over the incident and its diplomatic fallout. Some analysts maintained that the US had strongly sent yet another strong public signal about their uneasiness with the ruling AL regime and obvious preference for the BNP. Some years ago, Western analysts and activists had even indicated that they felt ‘more at home ‘with the BNP than with the AL ,during an interaction, as reported in Bangladesh media at the time.

Kolkata-based analysts point out that perhaps the explanation of the apparent US bias against the ruling AL was rooted in history. Bangladesh was established through a hostile break-up of pro-West US ally Pakistan in South Asia. The US, though it was forced to recognise Bangladesh and acknowledge existing realities, had never forgiven the AL, the party that led the struggle for East Pakistan’s freedom, as well as Russia and India, for their open-ended support for the liberation struggle.

It had resulted in a major embarrassing defeat for US/Western policy/diplomacy and much loss of face. Whether the Democrats or Republicans were in power in the US was not important — the basic pro-Pak thrust in its diplomacy in South Asia had remained the same. (IPA Service)