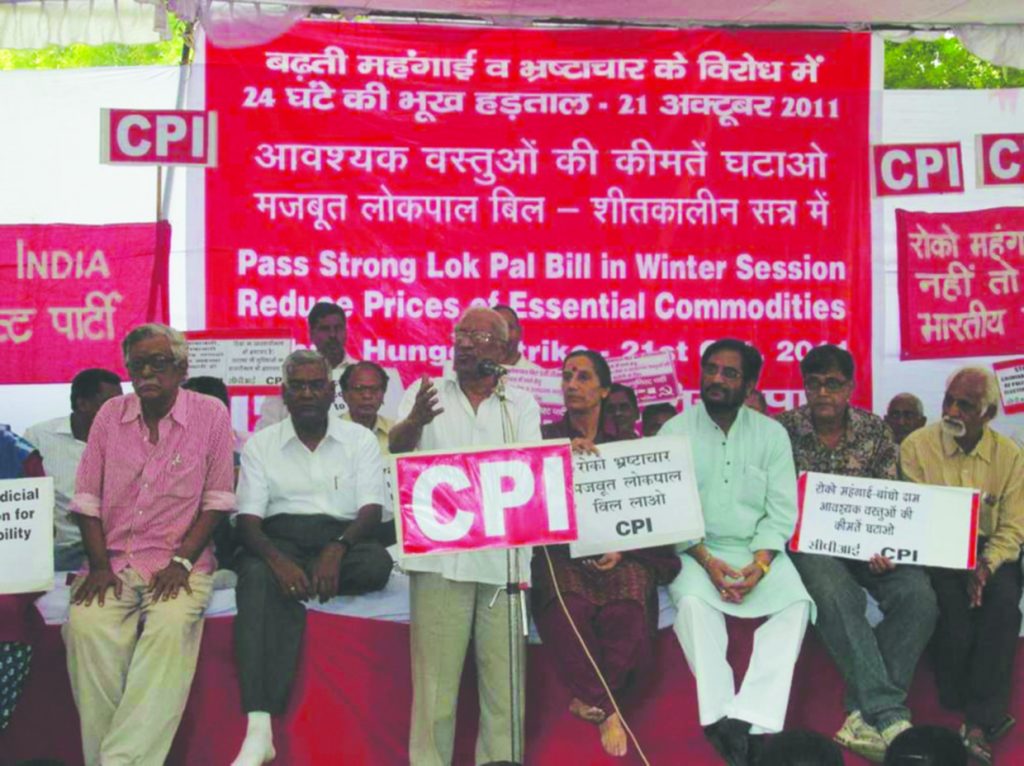 CPI general secretary D Raja said that the unity of left, democratic and secular parties is the need of the hour to save the country from the clutches of communal fascists. He underlined the necessity of launching struggles in the same spirit as of communist veterans, who sacrificed their lives during the freedom struggle against the British imperialists. He was addressing as the chief guest the meeting of party leaders and cadres assembled at Dasari Bhavan, Vijayawada on April 26 to set up the Reception Committee for the forthcoming 24th Congress of CPI in Vijayawada to be held during October 14 to 18, 2022. The meeting was presided over by party’s AP state council secretary K Ramakrishna.

D Raja said further that the RSS, which had not fought against the British imperialists at any stage, is today controlling the state of affairs in the country. It is belittling democracy by polarising the people of the country on communal and caste lines. It is not honouring the Constitution of the country and is trying to dismantle it. He expressed his annoyance at Modi-led BJP government’s continuous attack on Dalits, minorities, Adivasis and above all on those people who criticise the anti-people policies of the BJP government.

As our country is passing through an unprecedented crisis-ridden critical period, the ensuing 24th Party Congress of CPI at Vijayawada has assumed greater significance, Raja observed. In view of such importance as well as of the party having a legendary glorious historical past, the party ranks have to work hard to make the Party Congress another historical record-breaking event. He reminded the party comrades assembled that the Tenth Congress of CPI held at Vijayawada was a grand successful one. Once again, the 24th Congress is going to take place at Vijayawada, the citadel of communist movement. He recalled the services of veteran party leaders C Rajeshwar Rao, Dasari Nagabhushana Rao, Giri Prasad and Gujjula Yellamanda Reddy, who all hail from the Telugu speaking states.

K Ramakrishna in his address stated that The Congress is going to take place in Vijayawada, which is not only the centre of Telugu states but also is the centre from where the communist movement spread to all over India. The Party Congress is taking place at Vijayawada after 47 years once again. He recalled that he had participated in the Tenth Party Congress as a student volunteer along with many fraternal delegates.

Party national council secretary Binoy Viswam MP in his address stated that the forthcoming Congress, which is going to take place in Vijayawada is going to be lay foundation for yet another historic event.

Amarjeet Kaur, another national council secretary and general secretary of AITUC in her address stated that she too had participated in the tenth Party Congress in 1975 as a student volunteer. She cautioned the party comrades that the BJP is making every attempt to dismantle democracy and turn our Constitution into jeopardy and urged the party comrades to protect the country from communal forces.

Pallab Sen Gupta, international department in-charge and national council secretary of the party in his address announced that fraternal delegates from China, Vietnam, Russia, Cuba and many other countries will attend the Party Congress.

Dr B K Kango, also a national council secretary, in his address stated that in order to defend democracy from the clutches of communal forces, all secular forces have to get united in action. The 24th Congress has to become a platform to ensure such unity of action, he asserted.

Palla Venkata Reddy, Telangana state assistant secretary of CPI in his address reminded that in during the Tenth Congress, the Telangana state unit, then of undivided Andhra Pradesh, had mobilised many people from border districts of AP. In the same way, Telangana state party will mobilise a huge number of people for the 24th Congress as well.

Kunamneni Sambasiva Rao, Telangana state assistant secretary in his address stated that Vijayawada is the birth place for many historical political, cultural and literary events. The coming Congress, he underlined, will inspire young generation and thereby rejuvenate the party.

Muppalla Nageshwera Rao, AP state assistant secretary of CPI in his address stated that the people of the state are in angry mood as the central government miserably failed in fulfilling the promises made at the time of bifurcation. People of the state will participate in huge numbers. JVS Murthy, another state assistant secretary in his addressing stated that for the Party Congress, every party member and every unit will be mobilised. He assured that the state conference at Vizag will also be a grand success.

G Obulesu state AITUC general secretary in his address assured that AITUC will mobilise workers and employees for the rally and also funds. Penmetsa Durga Bhavani, state general secretary of NFIW in her address made it clear that 2,000 women volunteers will be helping the Party in the Party Congress work and also that half of the participants in the rally would of women.