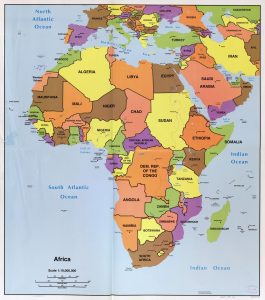 One can be forgiven for coming to the hasty conclusion that External Affairs Minister S. Jaishankar is another Modi-bot in the long line of them. For when Jaishankar writes “As the world marks Africa Day today, it may be appropriate to assess how much the India-Africa partnership has grown on Narendra Modi’s watch”, the thought about Modi bots crystalizes. The question is, what stops Jaishankar from saying “under my watch”?

Ministers in Modi’s Council should get out of the warp that they always have to wrap themselves in the “I’m beholden to Modi” garb. That said, when the subject is the Dark Continent, and “today” happens to be ‘Africa Day’, then it is EAM S. Jaishankar who will have the big picture, as also a better understanding of Prime Minister Narendra Modi’s role in guiding and building that relationship.

For example, the EAM tells us that the “guiding principles of India’s approach to Africa” was laid down by nobody else but Modi in his address to the Ugandan Parliament in July 2018. These guiding principles are summed up in “India would respond to Africa’s priorities, demands and needs, rather than impose its agenda (on African countries).”

That sounds like a snub to China’s approach towards Africa. But, then India is elephant and China’s dragon, and while China plays a sweeping hand, India makes do with a finger in the pie. Modi, writes Jaishankar in a business daily, brought “new thinking” to the India-Africa relationship, key to which is enhanced attention to resources and capabilities.

High-level to-and-fro of top luminaries was part of the African unlock—34 outgoing visits by the President, Vice-President and PM of India, and over 100 incoming by Africa’s heads of states.

Trust Narendra Modi to double, triple, India’s spend on foreign tours of India’s creamy layer, the icing in the cake, support staff ensured they had seats in the VVIP flights! Narendra Modi put a stop to journalists flying with the Prime Minister of the day on the PM’s foreign diplomatic trips. Imagine the plight of Modi closeted with a babble of journalists in an aircraft, 35,000 feet up in the sky!

But we’re digressing, “Today”, May 25 is Africa Day, not Prime Minister Narendra Modi’s 2014 May 26 inauguration day. And what Jaishankar tells us is that, as part of Modi’s ‘Project Africa’, India expanded its diplomatic footprint, and Africa was given “pride of place” in India’s diplomatic canvas. A total of 18 new embassies now dot Africa. And the India-Africa Forum Summit (IAFS), 2015, saw the presence of all African states.

So, what else is the progress report showing? This is from the horse’s mouth—189 projects completed as part of the development partnership initiative, and capacity building. In addition, there are 76 projects at execution stage, and 68 in pre-execution. India’s lines of credit totalling $12 billion serve 40 African countries. And S. Jaishankar has “by heart” the names of the projects, including the fabulously lit Mahatma Gandhi International Convention Centre in Niger.

And while China is bullying its way, crisscrossing Africa, India is easing into African hearts, and winning them with capacity building, skill development and asset creation. India’s offerings include 50,000 scholarships, the 2009 launch of the Pan Africa e-Network, the e-Vidya Bharati for tele-education, and the e-Arogya Bharati for telemedicine. Beneficiary African countries include South Africa, which is part of the BRICS!

India’s ‘Africa Story’ by S. Jaishankar is hunky dory and not quite the Jungle Book that one would have expected coming out of the rather ambiguous understanding most people have of Africa. African nations together are India’s fourth-largest trade partner, $70 billion! India is also the fifth-largest investor in Africa. And, especially close to Modi’s heart, the Indian diaspora in Africa number 3 million spread over 46 African countries.

Japan is testimony to the fact that a great part of Modi’s diplomacy is being feted by the diaspora. That said, Modi and Modi’s man of diplomacy aren’t unaware of the security aspects of India’s relationship with African countries. Jaishankar highlights India’s military ties with Nigeria, Ethiopia, Tanzania, Botswana, Lesotho, Zambia, Uganda, Namibia, Tanzania, Mauritius and the Seychelles. And maritime security is not just limited to Mauritius, and the Seychelles.

Before concluding, how can India-Africa ties be spoken without bringing battling Covid-19 into the discussion, the ‘Made in India’ vaccines, and the other medical help India extended to African countries? The EAM writes about “a volatile and uncertain world”, but tempers it with “India and Africa can come together” for the benefit of both. The beauty of Africa is that you cannot separate the parts of Africa from the sum total of Africa! So, says the External Affairs Minister, “only with Africa’s emergence will the world become truly multipolar.” (IPA Service)