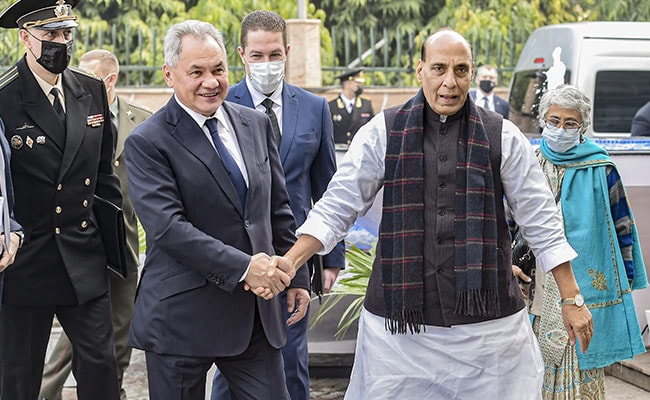 New Delhi: Union Defence Minister Rajnath Singh took a dig at China today at the “2+2” meeting with his Russian counterpart, accusing Beijing of unprovoked aggression, and said India is on the lookout for “sensitive and responsive” partners.  “The pandemic, the extra-ordinary militarization and expansion of armament in our neighbourhood and the completely unprovoked aggression on our northern border since early summer of 2020 have thrown in several challenges,” Mr Singh said at the meeting aimed at boosting strategic partnership between the two nations.

“India is confident of overcoming these challenges with its strong political will and inherent capability of its people. Recognizing that its development needs are colossal and that its defence challenges are legitimate, real and immediate, India seeks partners who are sensitive and responsive to India’s expectations and requirements,” he added at the meeting with Sergey Shoygu, under the framework of the India-Russia Inter-Governmental Commission on Military-Technical Cooperation.

Singh has been increasingly outspoken about China since its incursions into Ladakh last year.

Last month, while commissioning a destroyer of the Navy, he said “some irresponsible nations” with their narrow partisan interests and hegemonic tendencies are coming up with wrong definitions of the UN Convention on the Law of the Sea (UNCLOS). This, he said, is a matter of concern.

The India-Russia inaugural ”2+2” dialogue – meant to widen the ambit of discussions on strategically important issues – was followed by summit meetings between Prime Minister Narendra Modi and Russian President Vladimir Putin, who is in India for a short visit.

The two nations have  renewed a 10-year pact on military cooperation. The focus of the summit was Russia’s S-400 advanced missile, likely to help India tackle air threats from up to 400 km.