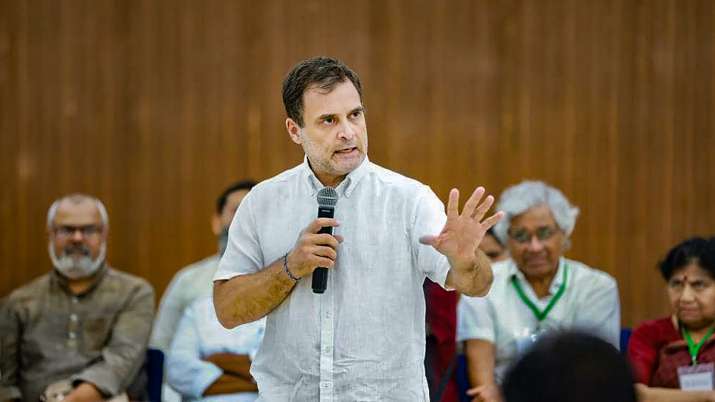 That in one question was Rahul Gandhi’s rendition of “What is Bharat Jodo Yatra?” The teenager went home satisfied, but the many journalists at the presser chose not to press Rahul Gandhi to elaborate. Instead they pestered the Gandhi scion with questions about the Congress presidency and when would he take on the mantle?

Rahul Gandhi told them to give it a rest and that he has made up his mind, and that he was “very clear in his head”, but that everybody would be made aware of what it was when the “elections are held”; that, for now, he was too busy with the ‘Bharat Jodo Yatra’, which was being “not led by me” as “I’m only a participant.”

Spoken like a true Gandhi. But, who was fooling whom? It is easier to believe the weatherman and tomorrow’s rain than a Nehru-Gandhi family member and the Congress president’s post. The sycophancy surrounding Rahul Gandhi wouldn’t let anybody else dare take the post. On the road with Rahul Gandhi, it’s clear that this is ‘Bharat Jodo’ for Rahul Gandhi and nobody else.

That said, there are spoilers everywhere, and there’s somebody in the Kanyakumari to Kashmir yatra who is giving Rahul Gandhi incorrect advice. Otherwise, Father George Ponnaiah of Kanyakumari wouldn’t have been a “stop” en route. Rahul Gandhi didn’t know George Ponnaiah is a priest who likes taunting Hindus. Also, Rahul made the mistake of asking Father Ponnaiah: “Jesus Christ is a form of God, is that right?”

With that sort of wide opening, Father Ponnaiah wouldn’t have missed the woods for the tree. “Jesus Christ is the real God, not like Shakti,” the Tamil priest told Rahul Gandhi in Tamil, a video clip of which is now going viral. “God reveals him(self) as a man, a real person…not like Shakti…so we see a human person.”

For the BJP, this couldn’t be more welcome. The ‘Bharat Jodo Yatra’ has started with a glaring disadvantage for the Congress, and Rahul Gandhi has himself contributed to the “disharmony” in Bharat that he had warned the teenage girl about. Also, the BJP may deny as much as it can, but the ‘Bharat’ of today is not one where all the people are living in harmony.

For as long as people like Father George Ponnaiah are allowed a free rein, the ‘Bharat’ that was spelled out by Rahul Gandhi to the teenage girl would elude India. Rahul Gandhi shouldn’t allow himself to be led by the nose by Congressmen who haven’t been vetted by trusted Congress leaders. There are any number of people in the Congress, and out of the Congress, ready and willing, waiting, to throw a spanner in Rahul Gandhi’s works.

Father Ponnaiah was arrested in 2021 for making a hate speech in Madurai, targeting among others Prime Minister Narendra Modi and Union Home Minister Amit Shah. There is also groundswell of feeling that Tamil Nadu has become a haven for Christian missionaries out to “harvest pagan souls” by converting them to Christianity. Once before, Ponnaiah was arrested for his remark “I wear shoes because the impurities of Bharat Mata should not contaminate us.”

Rahul Gandhi’s 150-day 3676 km ‘Bharat Jodo Yatra’ has only just begun and has a long way to go. A lot of young people, tens and thousands of them who will be voting for the first time in 2024, would be keenly following Rahul Gandhi on his quest to deliver what he preaches. The aspirational young people of India want a better life, and bagsful of opportunities. You cannot have bigots bog them in wasteful pastimes by sending the ‘Bharat Jodo Yatra’ on a fruitless errand. (IPA Service)

Queen Elizabeth Has Left Behind An Unequal And Poorer British Society
Posting....