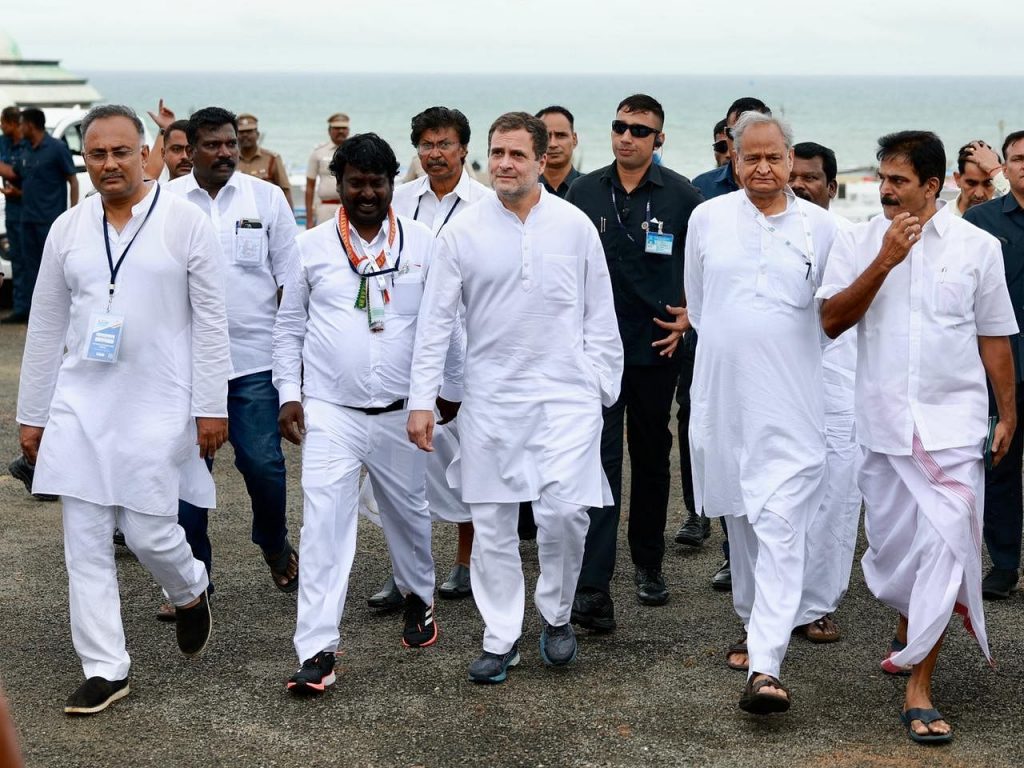 Congress leader Rahul Gandhi launched his most cherished “Bharat Jodo Yatra” after paying homage to his father Rajiv Gandhi at Sriperumbudur, where he was assassinated in 1991. It might lead to a turning point in Indian politics and could end up projecting Rahul Gandhi as the popular challenger to Prime Minister Narendra Modi. Rahul Gandhi said: “India is the institutions that protect this flag. India is free media that protects this flag. India is a judiciary that protects this flag. And today every single one of our institutions is under attack by BJP, RSS. They think this flag is their personal property. They think they can determine single-handedly the future of this people, state of this country,” Rahul will walk all the way from Kanyakumari to Kashmir, where the Yatra will conclude. He will be staying in a mobile shipping container cabin, which will have a bed, toilet and an air conditioner. Containers have been set up for other yatris as well, who will walk the entire route with Rahul. Bharat Jodo Yatra is the largest mass mobilization programme the Congress has undertaken in Independent India. It will cover 12 states and two union territories in five months.

Bihar Chief Minister Nitish Kumar is busy interacting with a host of Opposition leaders, believed to be as an effort to form a united anti-BJP front ahead of the 2024 Lok Sabha election. Nitish is aiming for the main front, not the third front. Nitish indicated and gave clues that he would return to Delhi to take this dialogue forward to unite all parties, even political opponents such as the Aam Aadmi Party (AAP) and the Congress together. Nitish also said he would meet Congress president Sonia Gandhi after she comes back from abroad where she has gone for a medical check-up. Recently, Nitish had interacted with Rahul Gandhi, Sharad Pawar, CPI(ML) general secretary Dipankar Bhattacharya, Delhi CM Arvind Kejriwal, CPIM general secretary Sitaram Yechury, CPI general secretary D Raja, SP chief Akhilesh Yadav and his father Mulayam Singh Yadav, as well as the INLD leader OP Chautala. Despite buzz that Nitish could emerge as the prime ministerial face of the opposition, the JD(U) leader once again dismissed the speculation, saying it would be consensually decided later.

BJP’s Guna MP KP Yadav seems to be annoyed and worried since Jyotiraditya Scindia joined BJP. In the 2019 Lok Sabha elections, KP Yadav defeated Scindia. But now that Scindia himself is in BJP, Yadav has an inkling that the party would give Lok Sabha ticket to Scindia, instead of him. So he is now looking for a new home. Recently, Akhilesh had offered Guna MP KP Yadav a place in SP. But the question remains whether Yadav would join Congress or the Samajwadi Party, or if he would stay on in the BJP?

To damage Samajwadi Party president Akhilesh Yadav, his estranged uncle and president of the Pragatisheel Samajwadi Party Lohia (PSPL), Shivpal Yadav has launched the ‘Yadukul Punarjagran Mission.’ The newly floated outfit will reach out to all disgruntled leaders in the Samajwadi Party, particularly those belonging to the Yadav community. Will Shivpal’s only end up Fragmenting anti-BJP votes in the state or will he joins hand with either Congress or the BJP? Meanwhile, Shivpal indicated that he would contest the Mainpuri seat if Mulayam Singh Yadav does not. On the other hand, after capturing Azamgarh and Rampur, the BJP in Uttar Pradesh is now eyeing Mainpuri, which is presently held by SP patriarch Mulayam Singh Yadav. The party is focusing more on Mainpuri Lok Sabha seat to prepare the ground to win the seats. State minister Jaiveer Singh said: “We are working towards winning Mainpuri in the 2024 general election.”

The BJP has commenced the preparations for the 2024 Lok Sabha elections in Uttar Pradesh. The party’s main agenda is focusing more on Raebareli to prepare the ground for winning the coveted seat, so far the Lok Sabha constituency of Congress president Sonia Gandhi. Union Agriculture minister Narendra Singh Tomar has been tasked by his party to work in the Raebareli region. Tomar has spent two days at Raebareli, a Gandhi family bastion. After conquering the fort of Amethi, now BJP is eyeing Raebareli seat. (IPA Service)