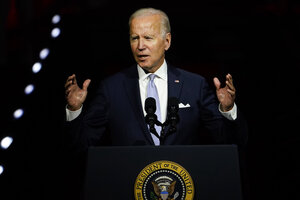 President Joe Biden took the gloves off against his predecessor, Republican Donald Trump, calling the former Oval Office occupant and his MAGAite disciples a huge threat to democracy and the future of the United Sates.

He went to Independence Hall   on September 1 to deliver both a dark message about how democracy is under assault and an optimistic one that, if there is a united fightback, the dangers of right-wing extremism can be overcome. There was no mistaking his intention, just two months before Midterm elections, to urge people to turn out in huge numbers to defeat the extremist fascist agenda represented by Republican candidates up and down the ballot.

He noted that the place from which he was speaking was the place where both the Declaration of Independence and the Constitution of the United States were written. Fighters for freedom and democracy the world over, including Ho-Chi-Minh, the leaders of the Vietnamese Revolution and the leaders of the fight against U.S. imperialism in his country, have invoked the Declaration of Independence in their struggles. Progressives in the U.S have noted that the history of the U.S. is one of struggling to achieve and extend the ideals laid out in those documents to build a country where full human rights are extended to everyone.

“They are working in state after state to undermine the Constitution and to take us back” to be a nation without rights to abortion, no freedom to marry whom you choose and a realm where Trump’s MAGAites will control the elections of 2022 and 2024 through key officials who can override voters, he said. “They’re determined to thwart the will of the people.

Summing up a key problem with the Trumpites, he said, “No democracy can survive if one side believes in only two outcomes: Either they win, or they were cheated.”

“Equality and democracy are under assault. We do ourselves no favours” by ignoring that. “Trump and the MAGA Republicans make it”—democracy— “so vulnerable…We heard, and everyone heard” from GOP grandees, “political violence is an acceptable tool.”  It is not and never must be, Biden declared.

While Biden, who has held frequent Oval Office sessions with historians, did not say so, threats to democracy have always been present in U.S. history and, when they were defeated, often only temporarily, it was the united actions of broad sections of the population that did so. Such was the case in the Civil War, and in countless battles against white nationalists, economic anti-labour forces and decades of repression and systemic racism during the Jim Crow years and going forward after them.

While he did not call openly for the necessary broad anti-fascist front, Biden couched the fight more in terms of the country needing to return to bi-partisanship, something he has done often since his last campaign for the presidency.

He said it was his “duty” as President to call attention to the threat form Trump and his followers and he asked that Democrats, independents and remaining non-Trump Republicans join the cause. He clearly achieved, however, what progressive Democrats and so many others have been demanding – elevation of the cause to preserve democracy as the top concern between now and the elections. Polls show that concern for preserving democracy is the main issue as far as millions of Americans are concerned.

He has been emphasizing the fight for democracy for the last week or so. In the speech on Thursday night he yoked preservation of democracy to preservation of a bright future for the U.S., too, pledging a continuation of economic expansion, infrastructure construction and the social safety net he’s carried through an evenly divided Congress for his 19 months.

That’s because saving the nation’s political soul would let all aspire to the American dream of freedom, decency, equality and economic success, Biden said. “Democracy makes those all possible,” he stated.

Biden also warned the threat is not just Trump. “The Republican Party is dominated and intimidated by Donald Trump and these MAGA Republicans, and that is the threat to our country…The MAGA Republicans believe that for them to succeed everyone else has to fail,” he said. “Too much of what is happening is not normal.

Trump and the Trumpites, including Republican leaders who condone if not encourage violence in the streets—Biden didn’t name names—are a huge threat to the U.S. soul and that future, he stated.

His sole example of another Republican was a veiled reference to Trumpite golf partner Sen. Lindsey Graham of South Carolina. The senator warned last week that if the Justice Department indicted Trump for illegally purloining top secret presidential papers from the White House to his Mar-A-Lago estate, violence and riots would occur. And Graham didn’t speak out to stop the potential chaos.

Despite the Republican attitude, “we are not powerless or bystanders” to their violence threat, Biden urged. “Americans of every background and belief believe in democracy,” he said.

The president said that once the rightwing threat is repelled, the U.S. can resume its march to a bigger, brighter and what he called “a world-leading future.” The hope, of course, is that leadership would be in areas like fighting climate change, world poverty and hunger rather than in support for the armaments industry by backing wars and military intervention overseas, features that have too often marked “world leadership” by the United States.

Biden’s theme is also a reprise of his 2020 campaign. He said then, and repeated all the way through that “I believe we’re in a battle for the soul of our nation.” Trump never answered that declaration or that theme, and still hasn’t.

Trump’s response was to cast doubt on the 2020 balloting even before it began. He’s continued that maniacal manifesto of grievance and resentment both in the first presidential debate that year and later—all the way to and through the election and beyond. That incited the insurrection and coup try.

In one more glimmer of Biden’s belief he could still unite the country, this time in the cause of preserving democracy, the president made clear he felt a significant hunk of Republicans still oppose Trump and MAGA. But opinion polls show he’s wrong on that, so far.

Even before Biden’s inauguration, and running through now, polls show rank-and file Republicans are, if anything, even more in thrall to Trump than they were in November 2020, or on January 6. (IPA Service)

Gulf Security In Peril, With Or Without Nuclear Deal With Iran