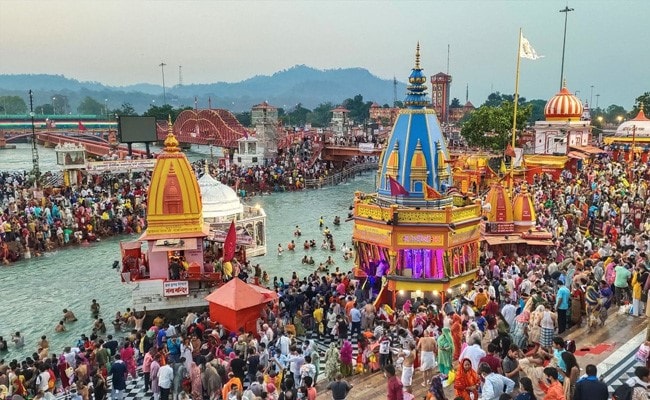 Kumbh Mela: The next significant Kumbh day is set for April 27. (File)

The mega Kumbh Mela at Haridwar is likely to close today, two weeks early, after discussions between the Uttarakhand government and religious leaders, sources said.

Hundreds of thousands have been gathering at the annual event on the banks of the river Ganga for a holy dip, escalating concerns about an exponential rise in Covid cases amid a countrywide spike in infections.

This morning, large crowds of Sadhus and devotees went for the “Shahi Snan” or “royal bath” to the main ghat, Har Ki Pauri, on the third major bathing day of the weeks-long festival.

The state government said till 2 pm, a staggering 9,43,452 devotees had taken a dip on what is considered one of the most auspicious days of the Kumbha.

“People are being fined for not following social distancing in non-crowded ghats, but it is very hard to fine people in the main ghats, which are very crowded,” police officer Sanjay Gunjyal told Reuters.

The next significant Kumbh day is set for April 27.

Sources said amid nationwide criticism and concerns over the event that usually sees record crowds, the state government has been trying to persuade the powerful akhadas or seer groups to end the event and leave Haridwar.

By noon, around 10 lakh people had taken a bath in the river, said Uttarakhand police chief Ashok Kumar, who was supervising the arrangements at Haridwar.

There was no distancing and hardly any masks when seers and their followers walked down the steps at the Ghat and waded into the river.