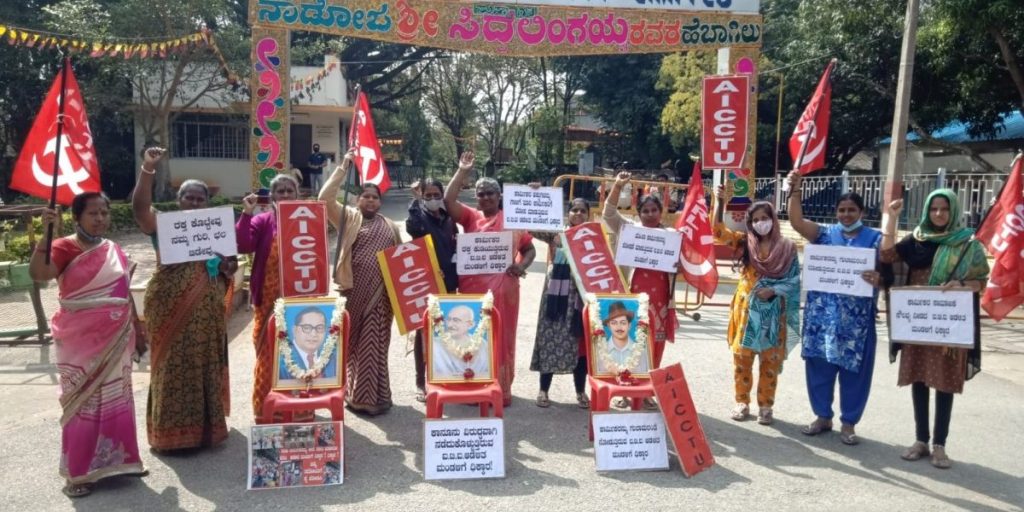 In Bengaluru’s 80 workers have entered their third month of protest against Indian Telephone Industries [ITI] Limited, one of the India’s largest public sector undertakings [PSU]. The workers, many of whom, are women and belong to the Dalit community, have been on protest since December 1 of last year, after being prevented from entering the premises of the company’s K.R. Puram-based plant on that day. Hours after being turned away from work, they were informed by a Human Resource representative that their employment had been terminated by the company, on account of a change in the contracting agency attached to the company.

Set up in 1948, ITI is independent India’s first PSU. Since its inception, ITI exclusively catered to the country’s telecommunication needs until the 1994 telecom policy – part of India’s liberalization reforms – opened the Indian telecom sector for both domestic and foreign investment. While many PSUs were unable to survive India’s liberalization experiment, with many either closing down or selling away huge stakes to the private sector, ITI survived the reform period to both expand its scope of services and profit-making capacity.

Today ITI, under the aegis of the Union Ministry of Communications, works in diverse fields including fiber optics, broadband connectivity, defense and surveillance technology. As per the company’s Annual Report for the year 2018-2019 alone the company made a profit of 111 crore rupees – a whopping 9 per cent more than the previous year.

Despite ITI’s profitable financial health, the workers employed with ITI have been struggling with issues of pay, contracturalization, and access to social welfare benefits for the better part of the last decade. ITI, which has manufacturing units and offices across the country in places like Naini, Manakpur, Raebareli, Palakkad, Srinagar and Bangalore, has seen labour problems frequent across these different locations.

The pandemic has accentuated the problems of these workers ten force. In July 2020, in the thick of the pandemic, around 250 workers were laid off without salary from the Bangalore ITI plant. Apart from pay, the workers were also denied legally mandated social benefits like minimum wages, provident fund, and employee state insurance. The workers were subjected to this treatment despite many of them toiling extra hours, producing life-saving equipment like ventilators and face shields during the pandemic.

Following the company’s refusal to pay their dues, several ITI workers came together to unionize and bargain for their rights during the first wave of the pandemic. The ITI workers who joined the Karnataka General Labour Union, affiliated to the larger All India Central Council of Trade Unions [AICCTU], began to file cases before the Regional Labour Commissioner (Central) for lockdown wages and minimum wages. The workers also raised a dispute before the same authority for recognition as permanent employees. Maitreyi Krishnan from AICCTU, who is one of the key organizers, states that “management was miffed with this inter-worker solidarity and unionizing by the workers, and for this sole reason decided to terminate the employment of the workers who unionized”. Krishnan also added that other workers who did not choose to unionize were retained by the ITI management and allowed back to work.

For one, a large section of workers were illegally guised as “contract workers” despite working at the company for years together, and performing the same job as permanent workers. Many of the terminated workers who worked with ITI had been with the company for five to 35 years, and were engaged in core activities being undertaken by ITI, including quality assurance, data entry, telecommunication and defence work.

The law on contractual work in India is clear: companies cannot contract out work which is “core” and “perennial” to the company’s operations as per the Contract Labour (Regulation and Abolition) Act, 1970 [Contract Labour Act]. Simply put, core and perennial activities refer to the activities for which the establishment has been set up, and includes within its ambit work that is essential or necessary to the core activity of the company. Only those activities which are “peripheral” and “non-core” can be contracted out. ITI, by employing workers in its core activities for years together, squarely violates the Contract Labour Act.

Two, it is a democratic and fundamental right of workers to unionize under Article 19(1)(c) of the Constitution of India. The Industrial Disputes Act, 1947 [Industrial Disputes Act] also clearly stipulates that victimization of workers for collectivizing and joining trade a union constitutes an unfair labour practice. By punishing workers for exercising their legal and democratic right, the company is violating the constitution and the law.

Three, despite the Central Regional Labour Commissioner of Bengaluru instructing ITI the previous year that no worker should be terminated on account of their complaint against the company during the pendency of the case, ITI fired the workers. This is in violation of Section 33 of the Industrial Disputes Act, which clearly states that during conditions of employment must not be altered during the pendency of a dispute.

The struggle of ITI workers is a familiar story among those employed by the Government in the public sector. Different PSUs like Hindustan Aeronautics Limited, Bharat Heavy Electricals Limited and Bharat Earth Movers Limited, which deal with operations like aerospace, power generation, and heavy equipment respectively, have been employing workers for years on end as “contract workers”. Similar to ITI, these PSUs have witnessed several protests by workers agitating for permanency, better pay and dignified working conditions.

Reports indicate that the government has far surpassed the private sector in hiring contractual workers, with a recent report by Trak.in showing an increase by 178 per cent of contract workers in government PSUs. As per the report, data published by Public Enterprises Survey shows that the count of contractual workers in Central Public Sector Enterprises rose from 2,67,929 in March 2016 to 4,98,807 in March 2020. Rather than act as a model employer, the government has paved the way for increasing contractualization.

It is also worth drawing attention to the fact that the Contract Labour Act was brought in by the Government of India to “abolish” contract labour in all possible situations and regulate it only in cases where abolition might not be immediately achievable. Rather than take steps to eradicate the practice – both in the private and the public sector – the Government has instead increased its scope of use, and is now attempting to normalize it through the labour code on Occupational Safety and Health of 2020 [OSH Code].

Under the nakedly pro-corporate, right-wing union government led by Narendra Modi, contract workers are only set to lose their rights further. Taking advantage of the COVID-19 pandemic and the resultant lockdown, the Narendra Modi led government rushed three new labour codes through the Parliament in September 2020. These, along with the Code on Wages that was passed in 2019, are to replace the entire gamut of laws that have, until now, governed labour relations in India. The three codes, which workers across the country have uniformly and unequivocally denounced as anti-worker, are the Industrial Relations Code, the Code on Social Security and the OSH Code. The latter code, which applies to contract workers, rather than work to eliminate the practice, has intensified its scope.

Earlier, the Contract Labour Act would apply to those establishments which employed more than 20 workers. However, under the new OSH code, only establishments with more than 50 workers fall under its scanner. The OSH Code also relaxes the complete prohibition of employing contract labour in core activities present in the Contract Labour Act by listing a number of exemptions under which contract labour can be employed even for core activities.

What is perhaps a ray of light, in an otherwise bleak story, is the solidarity that has poured in for ITI workers from people’s movements and workers groups around the globe. The strong resolve of the protesting ITI workers to forge a dignified working future for themselves has resonated with many. The ITI workers have received support from trade unions from as far as Europe, Maldives, Palestine and Morocco. Locally, people’s movements, including the National Alliance of People’s Movements founded by the inimitable social activist Medha Patkar, and other unions like the Bruhat Bengaluru Mahanagara Palike Pourakarmika Sangha (BBMP Sanitation workers union), have extended their support to the protesting ITI workers.

The BBMP Sanitation workers, who were subject to harsh and precarious work conditions, had, through a series of protests in 2017, led the government to commit to the abolishment of the oppressive contract system that they were entangled under. Drawing from the struggle of BBMP Sanitation workers, many ITI workers hope to similarly break the shackles of the unfair labour conditions they find themselves in. Through the power of collectivization they hope to build a future marked by security of tenure and dignified working conditions. (IPA Service)