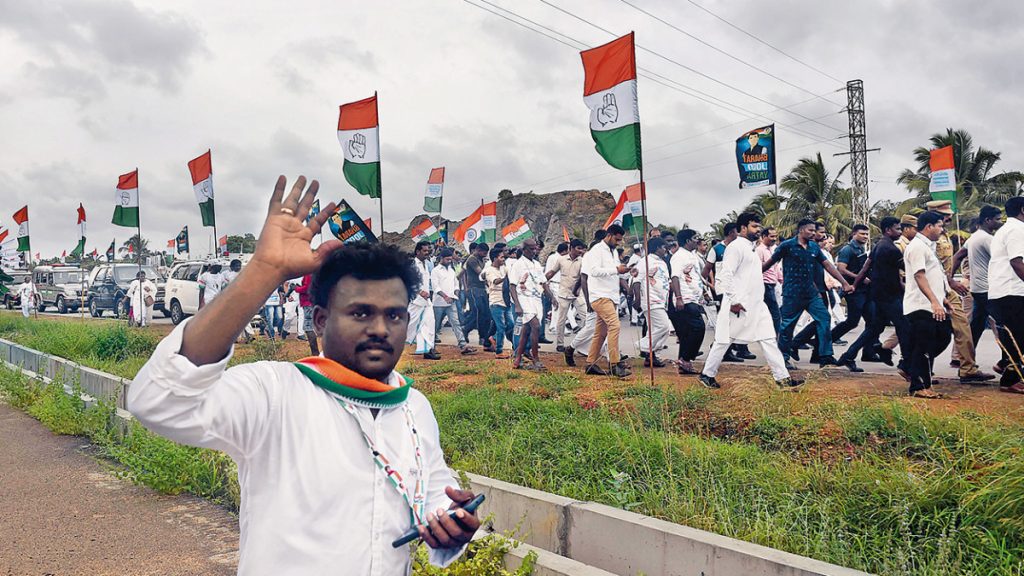 LUCKNOW: Congress is depending on the success of Bharat Jodo Yatra of Rahul Gandhi to create a favourable atmosphere for party to do well in 2024 Lok Sabha polls in Uttar Pradesh. In order to spread the message of Rahul Gandhi, Congress also organised state level yatra in support of Bharat Jodo Yatra. These Yatras were organised in every district of the state and all the senior leaders of the party attended and highlighted the problems faced by the people in the state.

Congress is depending on leaders imported from BSP to build up the organisation to work at grass root to spread the message of the party for 2024 Lok Sabha polls. Significantly Brijlal Khabri who had been twice MP in BSP is now UPCC President. There is no doubt that Brijlal Khabri had worked at grass root level for building the organisation in BSP but it would be very difficult for him to get similar result in Congress due old mindset of the leaders.

Since BSP leaders have the habit of working in mass contact programmes, Brijlal Khabri has initiated several district level yatras like Gandhi Sandesh Yatra and Ambedkar Sandesh Yatra all over the state. Brijlal Khabri has asked party leaders to highlight the problems being faced by the people of state and apathy of the government to resolve them. UPCC President has also asked the state leaders to expose large scale corruption of those in power.

Other important leaders brought from BSP like Nasimuddin Siddiqui and Nakul Dubey have also been given important position in the party. They have also succeeded in bringing other important dalit leaders from BSP with them. After the bitter experience of alliance with Samajwadi Party in 2017assembly polls, Congress leaders leave no chance to attack Akhilesh Yadav and his party.

There is a realisation in Congress that party would only gain in terms of vote percentage if it succeeds in winning over traditional vote bank of brahmin, muslim and dalits. Congress has yet to come out of the shock of worst ever performance in assembly polls in March 2022 when party could only get two seats and two percent of vote share.

Senior leaders feel Rahul Gandhi should do exclusive yatra in UP to mobilise people like he is doing in other parts of the country. Congress leadership is facing very difficult task to revive the party organisation at the grass-root and make it more aggressive to face BJP riding on Hindutva strategy.

BSP leadership is also finding it very difficult to regain its original status of 2007 when party formed the government on its own in UP. BSP national President Mayawati who had thrice been chief minister is struggling these days to make her party relevant in present political scenario. She is seen more giving advice to BJP governments at the centre and as well in state than attacking on their failure in governance.

Like Congress, BSP also performed very poor in UP Assembly polls and could win only one seat with two percent vote share. These days Mayawati is working on the combination of dalits and Muslims. There is a realisation that if party succeeds in winning Muslims, than upper caste would automatically follow them.

Mayawati has realised that main strength of Samajwadi Party is the muslim community which supports the party in every election ever since Mulayam Singh Yadav protected the Babri Masjid from karsevaks when he was Chief Minister in 1990.

As a part of the strategy, Mayawati launched attack on Akhilesh Yadav for hobnobbing with BJP to create doubt in his muslim support base.. That is why she never leaves any chance to show Samajwadi Party working against the interests of muslim community which plays very important role in vote politics.

There is no doubt BSP is the only party which held so many review meetings after assembly polls and made changes in the party organisation giving more important position to Mayawati’s brother Anand and his son Akash.

On the other hand, there has been large scale exodus of senior leaders and workers from BSP to other parties and Mr Satish Mishra former MP who was virtual number two and brahmin face of the party is not active these days.

During current political scenario, Congress and BSP are facing very difficult task to revive the party from grass-root and convince the voters to ensure victory for their candidates in 2024.LokSabha polls. (IPA Service)