Ashok Gehlot Versus Shashi Tharoor Will Be An Interesting Fight 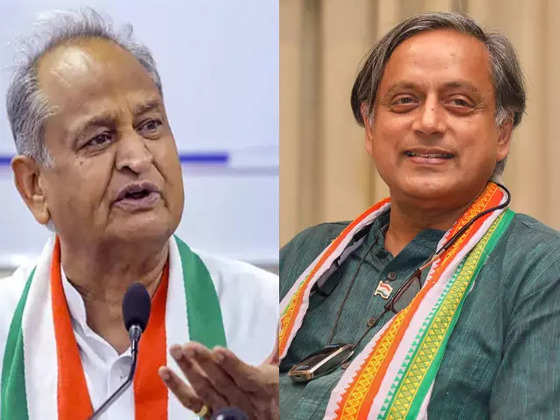 Has Rahul Gandhi’s persistence prevailed? The Gandhi scion has always wanted an elected Congress president, and it seems he is getting his wish fulfilled: Congress interim president Sonia Gandhi has given her consent to Thiruvananthapuram Congress MP Shashi Tharoor to contest the party’s presidential election, and Congress leaders claim there couldn’t be a bigger endorsement of inner-party democracy.

Shashi Tharoor himself says the more the contestants, the merrier the contest—let the games begin! People are laughing. Why does Tharoor want Sonia Gandhi’s permission to contest? The people who are laughing are of the BJP IT Cell. Shashi Tharoor is one of the G-23, the select group of 23 Congress leaders who had written to Sonia Gandhi seeking “sweeping reforms”, including elections for party posts.

Does that make Shashi Tharoor suspect? Somehow it doesn’t appear so. Tharoor comes out as valued to both groups—“loyalists”, as well as “establishment”. And with Sonia’s “consent” in his pocket, Shashi Tharoor will contest the presidential election, notification for which will be issued on September 22.

Tharoor will challenge Rajasthan Chief Minister Ashok Gehlot, Sonia Gandhi’s original choice; and, perhaps, still the first preference. But Gehlot continues to be adamant “Rahul Gandhi or nobody else”. Sonia Gandhi had left India with the question unresolved even as Tharoor had made sure that the Congress president’s election remained on the cards.

And neither Sonia Gandhi’s absence nor Rahul Gandhi’s ‘Bharat Jodo Yatra’ could come in the way of Shashi Tharoor’s intent. In fact, Tharoor and “likeminded Congressmen and Congress women” did not allow Sonia Gandhi time to reflect on her return. A meeting was sought and Sonia Gandhi was left with no option but to give her consent.

While more than one contestant could surface, the main contest will be between Ashok Gehlot and Shashi Tharoor. Reports say there’s a new spring in Tharoor’s steps after Sonia gave her consent though Ashok Gehlot is perceived as the “establishment candidate”, and the runaway victor if Rahul Gandhi continues to decline the party chief’s post.

That said, it could still be “Rahul Gandhi for president” all the way, and Shashi Tharoor the feint to keep dissent bottled up and guessing to the extent possible. The belief is Tharoor doesn’t fit the mould of the Kapil Sibal-Anand Sharma-Ghulam Nabi Azad crowd. Sibal and Azad had cut loose and gone, though they might still have pockets of influence in the party.

A spate of Congress resignations one after the other hadn’t helped. The question being asked now is will Tharoor’s candidature “shake-up” the behemoth? The talk going around is that Sonia Gandhi told Tharoor she’s all for “free and fair” elections. But many feel otherwise. Sonia may talk   this in public but she will back a Gandhi  family loyalist    from   behind.

Sonia Gandhi’s consent came even as Shashi Tharoor endorsed a petition, signed by 650 and growing number of Congressmen and Congresswomen, seeking “constructive reforms”, and a “pledge to implement the Udaipur Declaration” in full. The thing to note is that the petition could not have been drawn up in a day, and Shashi Tharoor must have known of it for quite some time.

The former UN diplomat is keen to contest and “make internal democracy” his plank, something which Ashok Gehlot wouldn’t think of in his wildest dream. Shashi Tharoor and Ashok Gehlot are from two vastly different planets. The Malayalis may be all for the Gandhi family, but Sonia Gandhi at least would rather trust Ashok Gehlot than bank on the loyalty of the Malayali Tharoor.

And, as if Tharoor seeking Sonia’s permission is not funny enough, Sonia Gandhi indicating she’ll “stay neutral” is hilarious! A doting mother will be the last person to change spots. Sonia’s choice/preference for Ashok Gehlot was made known to all and sundry when she left India for “abroad” for the medical check-up; now, when she has meekly agreed to an elected party president other than a Gandhi or a Gandhi-appointed, it just doesn’t gel.

Also, Tharoor hadn’t been sitting idle in Sonia’s absence. The “loquacious” man was leaving a trail of “speaking his mind”; from writing a piece in a Malayalam newspaper to holding forth to a “Gandhi-family reporter” of a popular Hindi TV channel while on the move with Rahul Gandhi’s ‘Bharat Jodo Yatra’.

Sonia Gandhi’s assurance to Shashi Tharoor that there will be “no official or establishment” candidate revolts against the Congress culture of the day. In the Malayalam newspaper article, Tharoor had spelt out the necessity for an election. He was also game for a non-Gandhi party president; asking that “many candidates come forward and participate in the election in the democratically functioning party…”

The Congress could do with Shashi Tharoor at the helm. This man isn’t the sycophant like so many others in the Congress; he wants to be his man rather than somebody else’s coolie. He wants the party’s central election authority to publish the party’s electoral list on the All India Congress Committee website for “free and fair” elections. The Congress central election authority has refused point-blank, and that tells a story.  In any case, it is interesting time for the Congress Party. (IPA Service)

India Most Vulnerable To Disaster Displacement In South Asia
Posting....