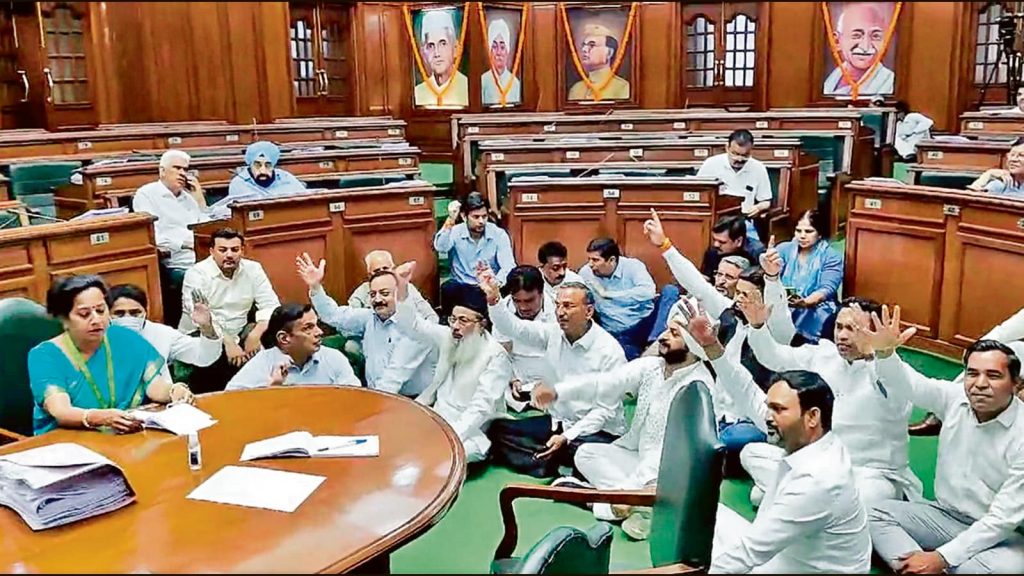 Last week, Union house minister Amit Shah introduced a brand new bill within the Lok Sabha to unify the three municipal bodies of Delhi (MCDs). Whereas the Bharatiya Janata Party (BJP) says that the bill was brought to rid the MCD of its perennial monetary disaster, the contents of the bill and the circumstances through which it was drafted and tabled in Parliament, in a tearing hurry, are a reason behind concern. They spell the death of democracy in Delhi’s native bodies.

First, let’s perceive the scale of the monetary disaster in MCD. The combined annual revenue of the three firms from their income sources is Rs 6,725 crore; whereas the total annual salary and pension, the bill is Rs 8,940 crore — a distinction of Rs 2,200 crores. By its own account, the BJP has projected a monetary achievement from the unification of the MCDs at Rs 200 crore in 12 months — by largely lowering employees and institution prices. However, the numbers simply don’t add up.

It was always evident that to improve their monetary situation, MCDs need a top-to-bottom reform. While the Delhi Government’s revenues have soared two-and-a-half times in the last seven years of the Aam Aadmi Occasion (AAP) government, the incomes of MCD have both stayed static or decreased. Take the case of property tax — of the 1.2 million properties in North MCD, about 400,000 are below the tax web after 15 years of BJP rule. Income collections from hoardings and commercials have declined steadily, inversely proportional to the variety of hoardings displaying the BJP’s marketing campaign slogans for free.

It is clear that the drama around presenting the brand new MCD bill in Parliament as a panacea is nothing but a grand lie. An attempt to cover the unchecked corruption and monetary mismanagement of the MCD under 15 years of BJP rule that has left Delhi with the legacy of the tallest garbage mountains in India, the lowest scores within the Centre’s Swachh Bharat metropolis rankings and reputation of perhaps being the most corrupt municipal body. The writing on the wall is evident — the folks of Delhi are fed up and the BJP was gazing at yet another AAP tsunami in the MCD polls. The BJP’s subsequent steps take away any semblance of doubt that it is ready to launch a full-fledged assault on the idea of democracy to avoid an electoral wipe-out.

For the first time, the Union house ministry wrote to the State Election Commissioner one hour before the election schedule was to be announced, asking the body to postpone the elections indefinitely. For the first time, the Election Commissioner determined it fit to “comply” with the route unilaterally and without consulting the opposition parties. It’s unprecedented that the central authorities have rushed into drafting a bill to amend a local body Act, which constitutionally falls below the state legislature’s mandate, with no session with the state authorities. And for the first time, the central authorities have sought to switch all of the features of the state authorities within the revised MCD bill with the central government, leaving no position or participation of the state government in the smooth functioning of the municipal body.

If this bill is approved, the relationship of the Delhi government with MCD would be similar to that of the Tamil Nadu government — a constitutional travesty that solely the BJP can conceive.

The MCD invoice tabled by the Centre within the Lok Sabha makes no mention of any reform or road map for monetary restoration. It was anticipated that the Centre would finally put the MCD on a par with all other municipal bodies in India, which get a direct grant from the Central Finance commission of Rs 488 per individual each year, which provides as much as a major Rs 4,087 crores per annum for MCD. However, the BJP continued to disclaim the people of Delhi this right. So as a substitute, the bill’s solely substantive amendment is to reduce the number of wards from 272 to 250. There is no logic or rationalization for this besides that it forces MCD to endure a delimitation course, pushing MCD elections by at least a year

This series of undemocratic steps is nothing but a continuation of the Centre’s assault on the democratic mandate of the AAP government in Delhi. From forcibly taking away the anti-corruption bureau and services division in 2015 to stalling key schemes like mohalla clinics, CCTVs and the doorstep supply of ration scheme for years, and passing the blatantly unconstitutional Authorities of Nationwide Capital Territory of Delhi (Modification) bill, 2021, declaring the lieutenant-governor above the elected “government”, the BJP has left no stone unturned within the final seven years to stop the AAP government from exercising its democratic mandate.

It’s in this light that the introduction of the MCD unification bill must be seen. For the first time since the Emergency, a party has made a brazen attempt to cancel elections and snatch powers from opposition governments to avoid an electoral defeat. The BJP is attempting to get away with the murder of democracy in Delhi’s local bodies in broad daylight. The judiciary and the folks of Delhi shouldn’t allow this. (IPA Service)