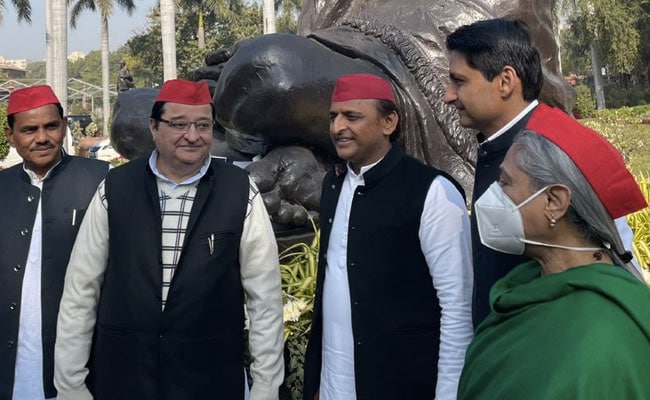 Modi made yet another trip to UP on Monday, while Akhilesh has been criss-crossing the state with his rallies.

“The colour red symbolises emotions. The BJP does not understand emotions. It is also the colour of the revolution. It also represents change. They know that there is going to be a change in Uttar Pradesh this time. Earlier, the Chief Minister used this language. It is not new,” said Akhilesh Yadav in direct response to the PM’s “red caps are red alerts for Uttar Pradesh” attack.

Expounding further, the Samajwadi Party chief underlined that it is also the colour of blood, of relationships. Even gods are seen in this colour, he said.

“If you will care to see, you will find colour red in gods as well. Lord Hanuman’s colour is red. The sun is red. It is the colour of relationships. And the BJP does not understand this,” said the former Chief Minister.

In Yogi Adityanath’s homestead, Gorakhpur, yesterday, PM Modi said, “The whole of UP knows that “laal topi waalon” (the red caps) are only interested in red lights,” referring to the  red beacons on top of government vehicles that have come to symbolise power and VIP status.

“These people only need power for scams, for encroachment, to give a free run to mafias. The red caps want to form the government to get terrorists released from jail… The red caps are red alerts for Uttar Pradesh… the danger alarm,” the Prime Minister added.

Responding to the jibe, Akhilesh Yadav tweeted: “The red alert for the BJP is over rising prices, unemployment, the bad condition of farmers and labourers; Over Hathras, Lakhimpur and harassment of women and youth. A destroyed education system, trade and health and also over the ‘red cap’ that will throw them out of power this time.”